Kanye West, Lil Jon & Pitbull Among The Most Repetitive Rappers

As part of a study created by Rap Analysis, the most repetitive rappers in music have been revealed. Among the artists who made their way onto the website’s “An Index Of The 23 Most Repetitive Rappers” chart are Kid Cudi, Ma$e, Kanye West, Jeezy, and Iggy Azalea.

According to Rap Analysis, the “chart measures what rappers repeat the same words the most” and takes into consideration an artist’s total word count and number of songs.

XXL magazine reports that there is the possibility of flaws in the chart due to the varying number of songs from each artist. For instance, Gucci Mane is on the chart with 426 songs while only 20 songs were taken into consideration for Atlanta artist Cash Out.

Martin Connor, the founder of Rap Analysis addressed the possible flaw in a Reddit thread earlier this week.

“Hey, good point. I included another picture that describes how big the data set for each artist is in terms of words and songs. Probably should’ve included that from the start. I think it’s big enough for most, but some people are under-represented, like Cash Out,” Connor wrote.

The “An Index Of The 23 Most Repetitive Rappers” chart and data can be found below. 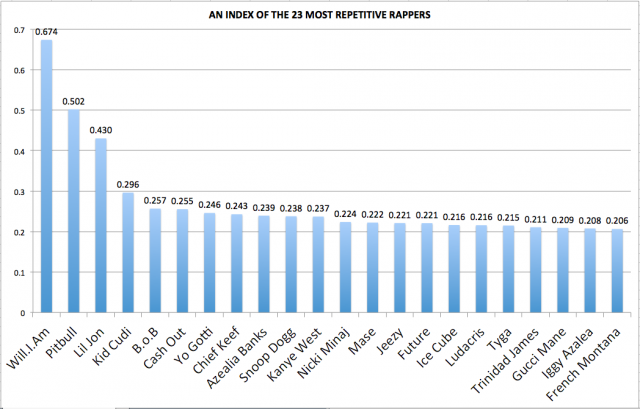