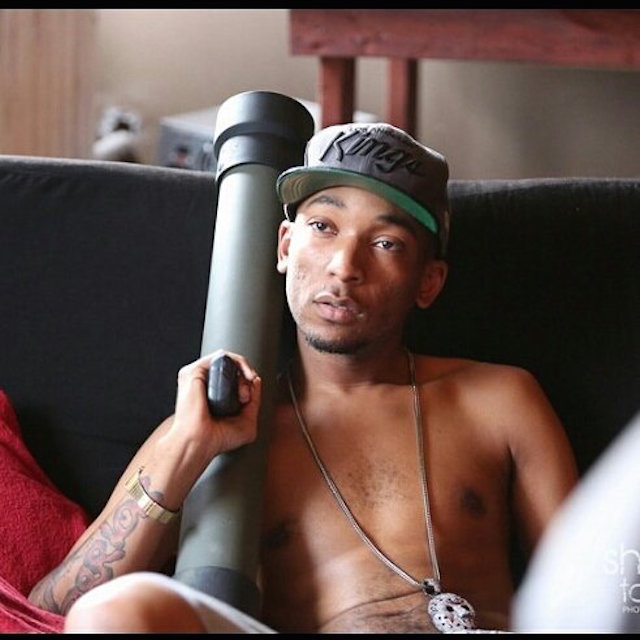 “There’s a lot of videos where they put a gun at the director, and I was like, ‘How did he not got shot?’” Mic Terror says in an exclusive phone interview with HipHopDX. “I played it out as just a possibility, a scenario of what could possibly happen.”

The video depicts an actor getting gunned down in the midst of filming. Mic Terror then props up the dead guy ala the movie Weekend at Bernie’s. Mic Terror and his Treated Crew brethren continue grooving to the music while wielding a lot of weapons.

“Everyone imaginable, ninja stars, katanas…did we have nun chucks?” Mic Terror says. “We definitely had a nice arsenal for martial arts and terrorist use.”

Despite the label’s decision not to support the video, Mic Terror posted it to YouTube and VEVO.

“As far as the label, I was just a little disappointed in them, “ Mic terror says. “We made a video, they don’t want to push that, but we get our message out and keep it moving.  ”

The song, which stands for anybody killer, is a single off of Mic Terror’s March album, Fresh Prince of Darkness. The album was released by Chicago indie label Closed Sessions, which has also released music from Alex Wiley and Vic Mensa.

“The saying ABK is a Chicago statement,” Mic Terror says. “It’s a gang statement in itself. ABK stands for anybody killer. Usually in Chicago people will take the initials of your gang and put a K at the end. Somebody that is ABK is like, ‘Fuck everyone. Don’t come over here. We’ll kill you.’ We have those too and those are what we call renegades. They don’t care about anybody except for their little group and anybody could get it.”

Mic Terror says the video was a surrealist take on what he sees as the typical Chicago Drill music video.

“I’m not a serious person but I notice serious things, “ Mic Terror says. ”You’ve got to laugh to keep from crying…The album in itself it’s a mirroring of the world. It’s all kind of satirical in a way. It’s like laughing at very serious problems through. It’s funny but look at it, let’s analyze this, this is a problem.”

Mic Terror said that he is working on an upcoming EP with Chicago footwork legends Teklife that will blend Hip Hop and Juke.

Mic Terror’s Treated Crew affiliate DJ Izzo was shot in November. He was on the road serving as Freddie Gibbs’ deejay.

“He’s doing good,” Mic terror says. “He was in Bellevue Hospital. He got hit in the femur. He was in there for two weeks or so. He took it like a G.   We don’t know what happened or who did it. Izzo, that’s the squad right there. We with him.”

In November, The Treated Crew kicked off a national concert tour called the Connoisseur Tour. In the first NYC event, Mic Terror shared the stage with fellow Treated Members, as well as Chicago emcee Katie Got Bandz. Financial magazine Forbes was on hand to cover the first date.

“But the thing that made it unique was that this was more than just a show,” Forbes said at the time. “It was a whole experience — one that combined artists, fans, and sponsors into one big, cutting-edge mix. Clothing brands and stores, vodka companies, and even rolling papers were brought in as sponsors. In addition, several spots on the Lower East Side served as ‘pop-up shops’ in the hours prior to the show.”

Radio personality Sway described Treated as a “Renascence crew,” during an interview with Mic Terror and other crew members in Sway’s Universe. Crew founder Mano described the group dynamic.

“Well the cool thing about Treated Crew is that it’s beyond rap,” Mano said in the interview with Sway. “It’s literally a creative collective. Buying into Treated Crew isn’t just buying into a brand and getting some likes on your outfit on Instagram. You buying into the privilege of being with these people and these creative because you can also profit off of this if you are real into this.”