An image bearing the purported tracklist to Kendrick Lamar‘s sophomore studio album has surfaced on the Internet. K. Dot has kept most of the details regarding the highly anticipated follow-up to good kid m.A.A.d. city under wraps, but the blurry picture reveals 18 tracks, a slew of features — and no title.

Besides releasing the feel good anthem “i,” Kendrick hasn’t teased any new music off the project. However, a track titled “King Kunta” — which is reportedly produced by Pharrell — was exposed by HBO’s Scott Vener. “King Kunta” and “i” are both included within the unconfirmed tracklist.

Last month, Lamar told Hot 97 that his upcoming album is “even more raw” than good kid m. A.A.d. city and that fans can expect production from Dr. Dre and Pharrell.

Check out the unofficial tracklist below: 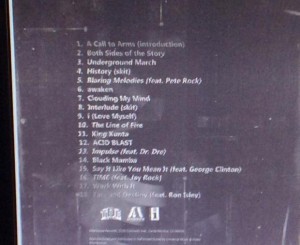 1. A Call to Arms (introduction)

2. Both Sides of the Story