Matt Daniels, a New York City resident who has described himself as a data scientist and digital analyst, recently updated his “Largest Vocabulary In Hip Hop” chart to include more emcees. Beyond making this update, Daniels has also announced the release of a Hip Hop Flow Chart poster with Pop Chart Lab. Today (July 30), Daniels spoke with HipHopDX about the expansion of the project he unveiled to the Internet in May.

“I was going to expand the project based on a lot of the feedback I got on Reddit based on the artists that weren’t included in the sample set, so I was planning on expanding it anyway,” Matt Daniels says in an exclusive interview with HipHopDX. “So, I added the additional emcees, but Pop Chart Lab did all of the design work. All the credit goes to them.”

“Featuring 100 meticulously hand-drawn MC effigies, this chart of lyrical locution analyzes the lexical freshness of nearly every rapper of repute—including Drake, the Wu-Tang Clan and cult favorite Aesop Rock—tabulating the number of unique words used in each artist’s first 35,000 lyrics (roughly equal to 3-5 albums). What’s more, each of these virtuosos of verse is then color-coded by their area of origin—all adding up to a fun, flava-ful flow chart that’s equally at home on the wall of a hip-hop habitué, etymology enthusiast or die-hard data junkie.”

Daniels hasn’t heard too much from rappers featured on the poster, but many Rap aficionados have let him know what they appreciate about this data project.

A teacher reached out, for example, saying that he believes the chart can inspire students to see statistics, mathematics and literature in a newfound manner. “That was one of the more redeeming things that came out of the project,” Daniels says.

Despite the academic value that might be gained from this, the chart isn’t just an academic project for Daniels, who says it was “a fun thing” to do. Instead, Daniels is quick to point out that this data is not scientifically accurate and that there are a lot of issues with the data quality based on various factors, including transcription accuracy, guest rappers impacting the study and repetitive choruses that may also influence findings. With that said, scientific accuracy wasn’t necessary the goal here.

“I think if anything, this encourages interesting discussion about Hip Hop,” Daniels says. “I think that’s the most important thing that I want people to take away from this.”

Another point Daniels makes regarding his study is that it shouldn’t be “proof” that one rapper is better than another because of word choice. “That’s just one component of how you approach an artist’s music,” Daniels explains. 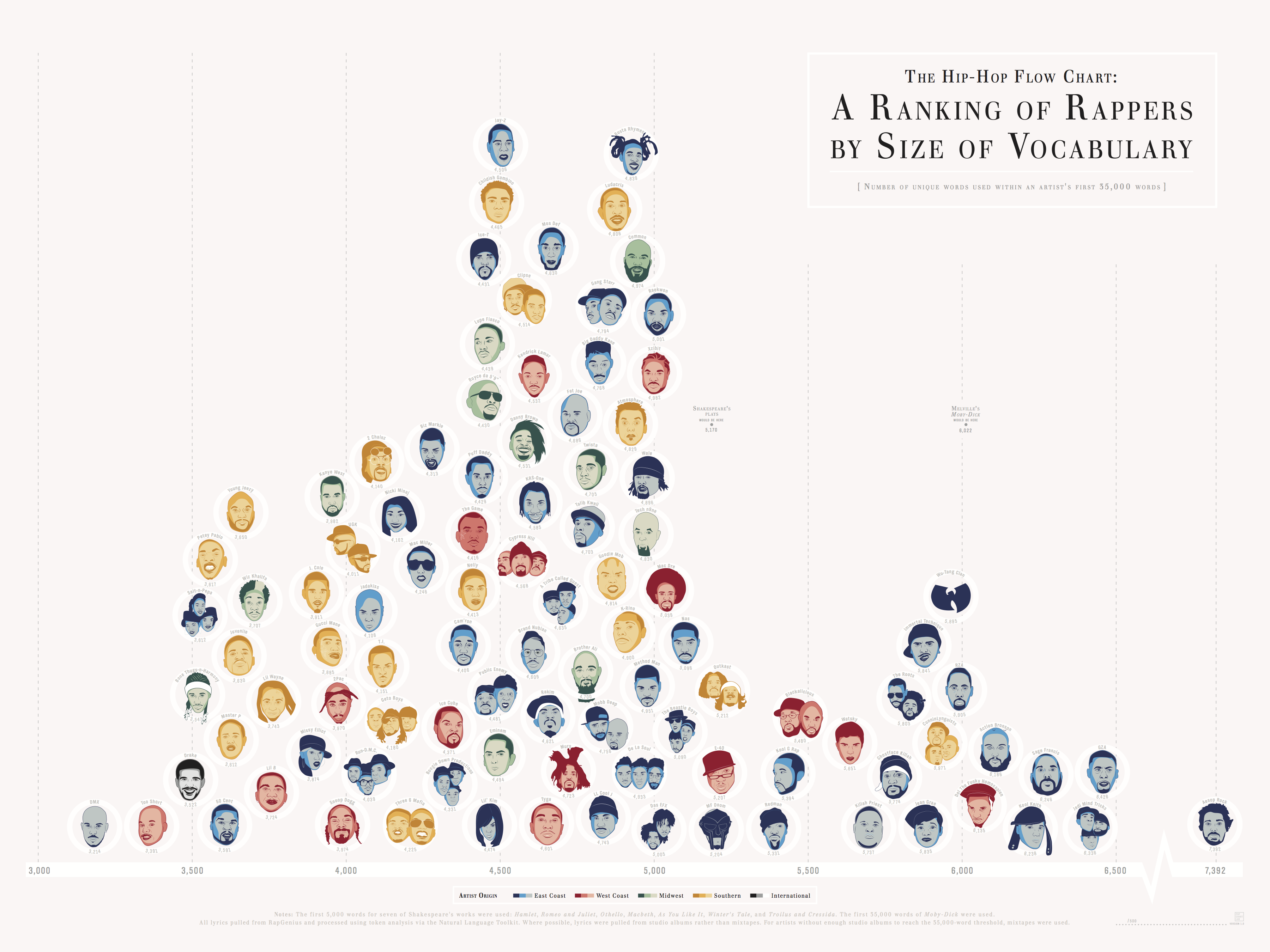