Matt Daniels, a New York City resident who describes himself as a data scientist and digital analyst, has created a series of charts that examine the number of unique words used for various rappers. Daniels has titled his project “The Largest Vocabulary In Hip Hop” and created his various charts using lyrics provided by the lyric-based website, Rap Genius.

Among the other artists featured in Daniels’ “The Largest Vocabulary In Hip Hop” study, which was inspired by the highly-celebrated vocabulary of William Shakespeare, are Eminem, Tupac Shakur, Drake, and members of the Wu-Tang Clan.

Daniels also took a closer look at the rappers, including Tupac and Lil Wayne, who were in the bottom 20 percent of his chart.

“While Lil Wayne has never been celebrated for the complexity of his word choices, I expected 2pac, Snoop, and Kanye to be well above average,” he said. “It’s also worth noting that Drake, one of the most popular artists of late, is #83 on this list.”

Due to a “lack of recent data,” a number of newer artists, including Kendrick Lamar, were not included in Daniels’ chart, which uses data current to 2012.

Daniels’ “The Largest Vocabulary In Hip Hop” chart as well as a handful of other infographics from the data scientist’s project can be found below. 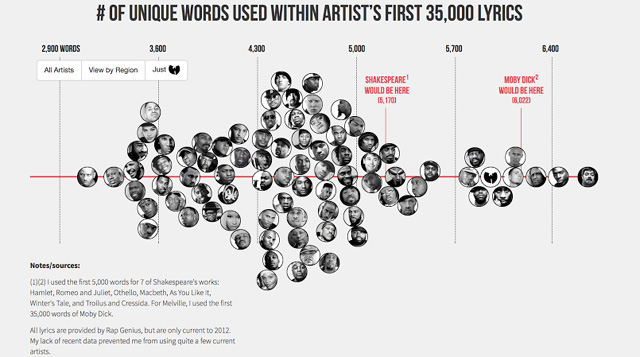 RELATED: New Music Study Finds That Fans Could Spend Up To $2.6 Billion More On Music