Project Know, an organization that promotes “the understanding of addiction,” has created several charts regarding the “Number of Rap Songs Mentioning Drugs.”

“Hip Hop isn’t the first musical genre tied inextricably to drugs – just think back to the trippy tunes of the 1960s and 1970s,” Project Know says of this chart. “But Rap’s celebration of all things intoxicating outpaces that of even its wildest pop-culture predecessors, by a long shot.

“Drug mentions in Rap lyrics have been enormous is quantity and explicit in quality since the genre’s earliest days,” the organization continues. “From sale to use and even overdose, Rap verses reflect the history of drug culture. But how has the relationship between drugs and Hip Hop changed over the years? Are today’s emcees still rhyming about the same substances as popularized in the 1980s? Which drugs have faded like fads, and which continue to bounce with the bass of every generation?”

Several rappers were named in the organization’s findings. In its charts, Project Know lists names of rappers who have mentioned particular drugs in songs, though how the rappers discuss these drugs is not referenced in the data. In the “Weed” category, Three 6 Mafia appears at #1 with Anilyst, The Roots, Afroman and Fashawn following in order. In the “Cocaine” category, Lil B is #1, Atmosphere is #2, G-Unit #3, Death Grips #4 and Ice-T #5.

The chart does not mention how the rappers reference these drugs. In some cases, rappers have denounced drugs. For example, Atmosphere, which is listed at #2 in the “Cocaine” category, has used the word in the following lyrics off “The Major Leagues” from To All My Friends:

“So I guess I was a lame / ’cause I wasn’t with the game / Motherfuck cocaine.”

Project Know explains its methodology with the following statement:

“This project gets its data from RapGenius, which gives the prevalence of phrases in rap music over time. Prevalence in this context is the total number of rap songs containing a given phrase in a year divided by the total number of rap songs in that year. We have opted to leave out certain substances and slang phrases to prevent our results from being skewed by slang phrases that are often used in other contexts. As an example, heroin is commonly referred to as ‘boy,’ but the word ‘boy’ is also used in a variety of contexts that have nothing to do with heroin.”

Some of the Project Know charts are below: 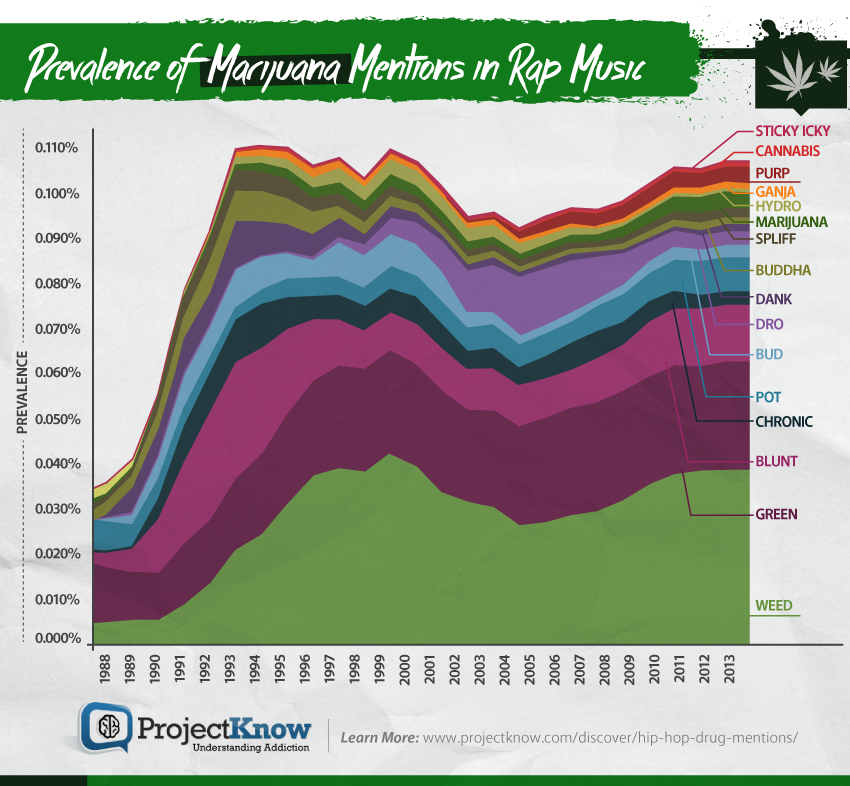 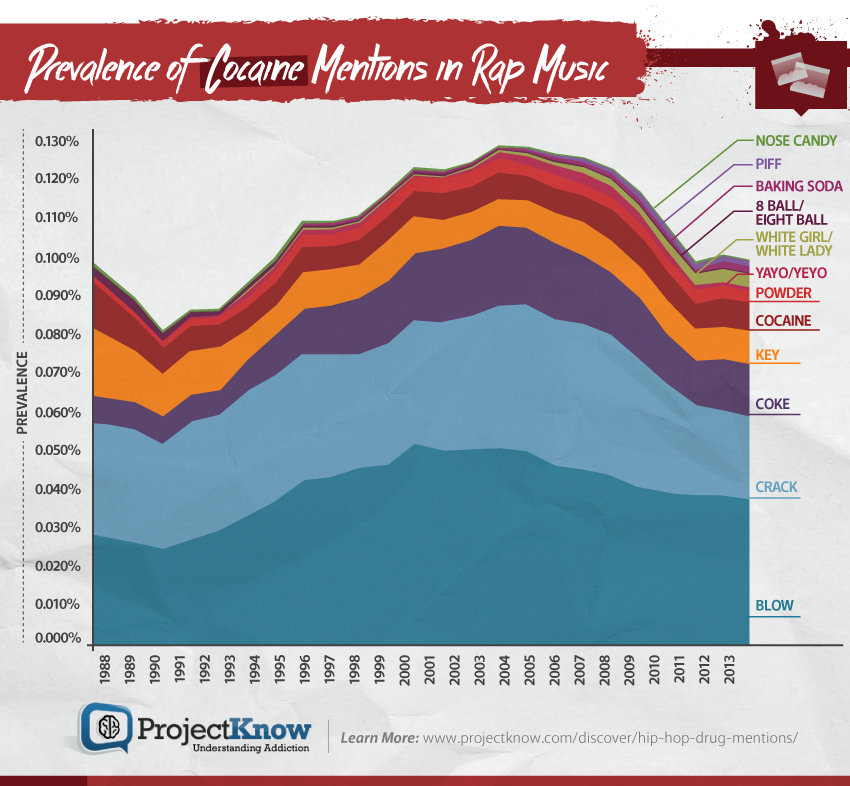 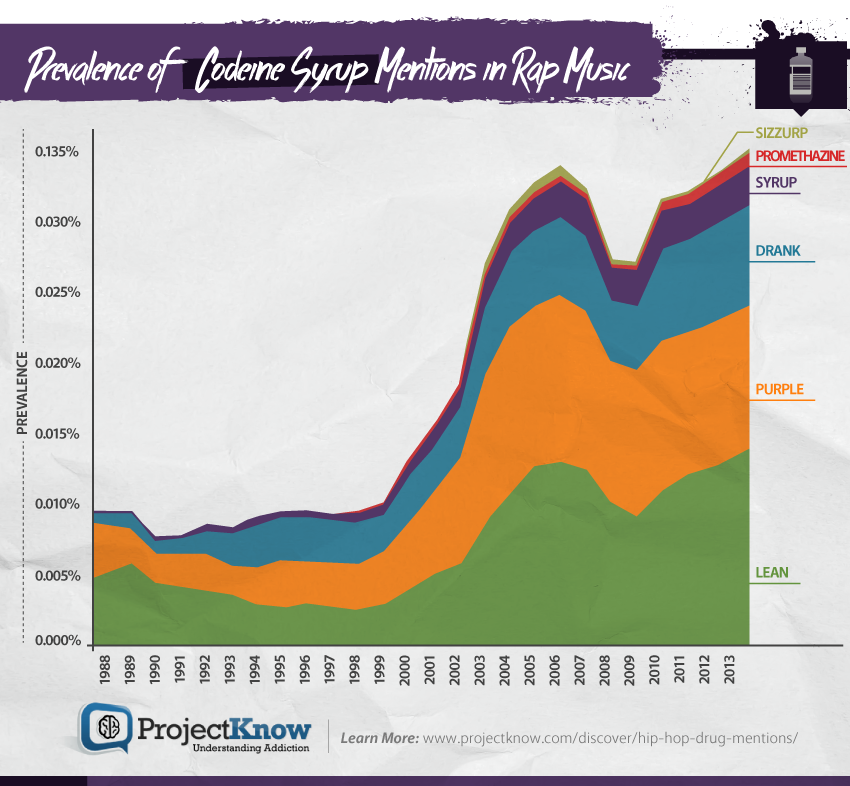 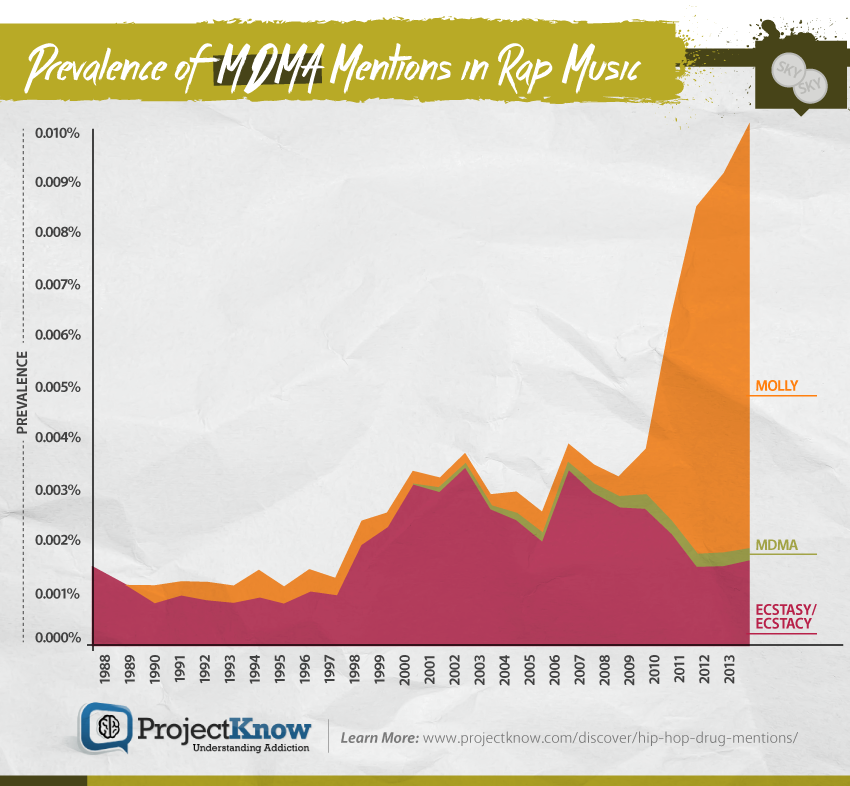 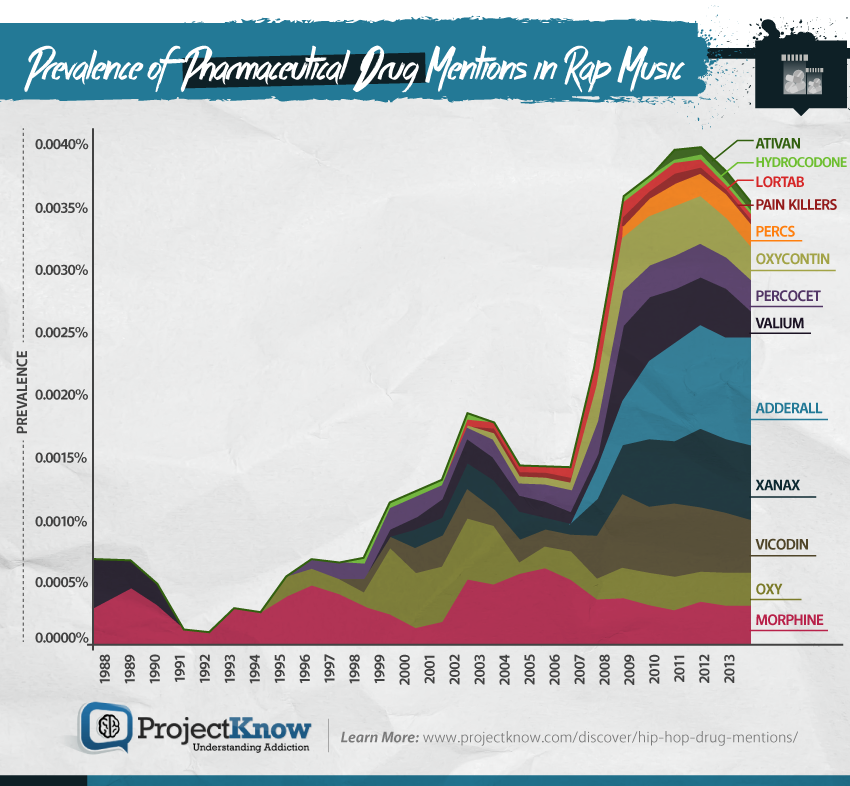