Following recent controversy surrounding Jay Z’s hinted affiliation with Nation of Islam offshoot the Five Percent Nation, an active member of the organization recently spoke with The Source about the rapper’s alleged connections.

“Some of us don’t know if Jay Z is a Five Percenter,” a member named Born Justice Allah said. “He should have some kind of influence from some of the Five Percenters in his area ‘cause he grew up in Brooklyn. Brooklyn, as we call Medina, was heavily influenced back in the ‘60s. So I’m not gonna say he’s not a Five Percenter but I can’t say he is either until I talk with him. Same thing with Carmelo Anthony, I would like to know because you wearing our Universal Flag.”

Jay Z’s alleged ties with the organization stem from both a recent lyrical reference to Yakub—an ancient scientist responsible for the creation of the White race according to Nation of Islam theology—and his sporadically donning the organization’s Universal Flag. On a featured verse that appeared on Jay Electronica’s “We Made It” last month, Jay Z raps, “I’m ready to chase Yakub back into the caves / These are the last days / But do I seem fazed?” 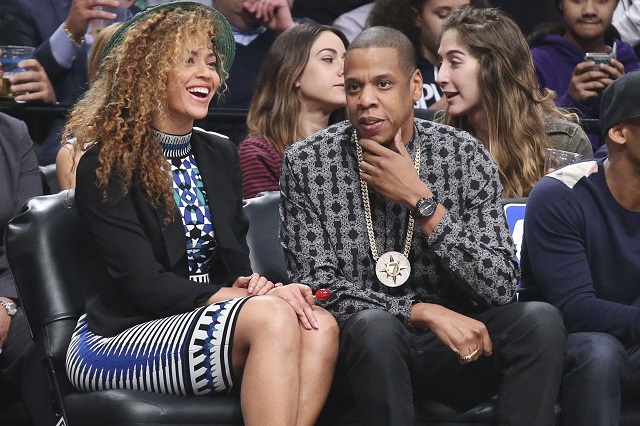 “I couldn’t go and just make a Roc logo—you know, Jay Z had the Roc logo—I’m quite sure somebody would have asked me am I down with Roc-A-Fella Records,” Justice Allah added. “No. If I’m not down with the Roc then why am I wearing the Roc logo. Same way you wearing the Five Percenters universal flag, are you affiliated with us? You showing us respect, you have it on. I wouldn’t be…courtside at the basketball game but he took it there. Now that it’s there, why people zooming in on the flag? Just because Jay Z wearing it? We been wearing the flag for years. We have some made in medallions for years. Is it really about Jay Z? Is it really about the Five Percenters? The Five Percenters are not wicked people, we’re righteous. Our father taught us to be not anti-White nor pro-Black. [He] taught us to be anti-devilishment and pro-righteousness. It’s a big difference in the twist and turns that people use in words.”

Earlier this year, Jay Z’s possible ties to the Five-Percent Nation were also questioned by son of the late Wu-Tang Clan member Ol’ Dirty Bastard. “If he spreads this, which we are all his messengers, I don’t see nothing wrong with it,” YDB said. “But if he says anything bad about it—and he not teaching nobody right now. Him and Beyoncé—Beyoncé’s a beautiful woman, but they not teaching nobody shit. All I’m trying to say is we here and we only here to teach. I’m Elijah Muhammad’s student, he had a lot of children and I’m putting a lot of babies on this planet right now.”