Brand Nubian rapper Lord Jamar recently engaged in a Twitter argument with Scary Movie actor Marlon Wayans over a recent photo of Omar Epps wearing what resembled a skirt on The View.

Jamar originally tweeted a screenshot of the actor with the caption, “What the bloodclot???!!!,” which caught Marlon’s attention, having him react. He subsequently responded: “@lordjamar the real question is why you taking close shits of a nigga crotch and tweeting it? U wearing an invisible dress. #real2snapsupofu.”

Lord Jamar hit Marlon Wayans back quickly, saying, “@MarlonWayans I’m not the one who took the pic it was sent to me…why u worried? U like that style huh? Lol.”

Lord Jamar has had a long recent history of questioning other’s masculinity. He recently said that Dr. Dre had to alter his attire once he went to N.W.A from the Rap-R&B group World Class Wreckin Cru. In January, he said Kanye West is a pioneer of “feminine, emasculated style that’s trying to infiltrate Hip Hop.”

View all relevant tweets regarding the two below (via Vlad TV): 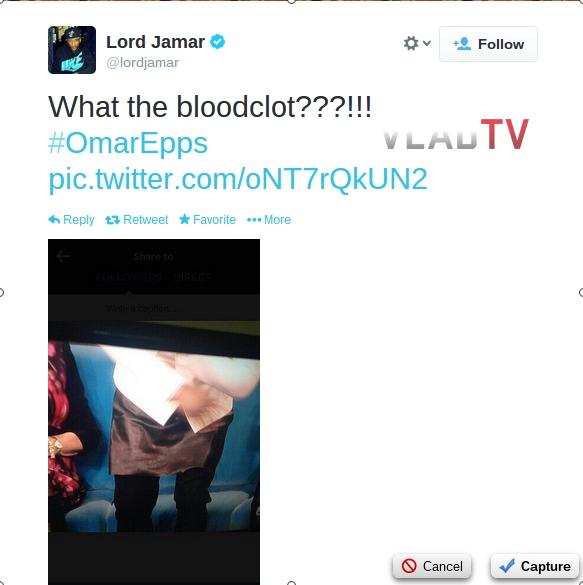 This nigga @MarlonWayans on my dick trying to Google anything he can find about me. That’s sweet lil nigga.

RELATED: One For All: Hip Hop’s Botched Racial Dialogue With Lord Jamar