Recently, tracklistings and announcements regarding the fifth edition of Lil Wayne’s Tha Carter series have been floating around the Internet waiting for some sort of confirmation. YMCMB president Mack Maine hit up Twitter yesterday to poke a hole in what fans may or may not have been excited for these past few weeks.

What is now considered the “fake” tracklisting consisted of 12 songs and included features from the likes of Kanye West, Drake, Game, Meek Mill, Future, The Weeknd, Nas, Young Thug, among others.

The paper on which the song titles and features were inscribed was brought to Rap-Up via a friend of the album’s supposed engineer, Mike B, who was addressed at the top of it. Lil Wayne’s manager Cortez Bryant has also confirmed the rumored tracklisting as false via XXL.

Mack Maine is the president of Young Money/Cash Money Records. He is also a rapper signed to the label and has released 10 mixtapes within the years 2004-2013.

Lil Wayne’s Tha Carter series consists of four albums that have been released so far. The first drop of the series was in 2004 with Tha Carter and is at its current end with Tha Carter IV, which was released in 2011. Wayne dropped his most recent solo album last year with I Am Not a Human Being II.

See Mack Maine’s tweet below as well as an alleged early tracklisting of Tha Carter V: 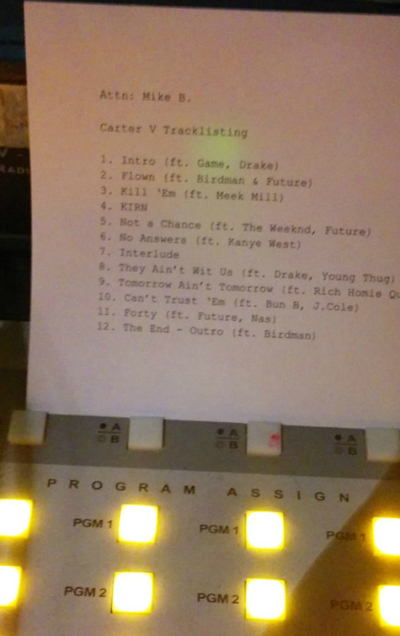