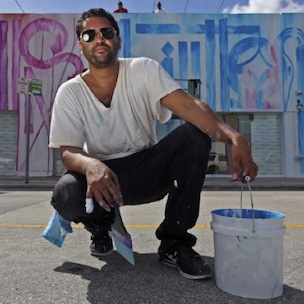 RETNA, a graffiti artists who says his style was derived from Olde English font and traditional graffiti, recently did an interview discussing his work and his fans.

“Usher was someone who collected my work very early on,” RETNA says in an interview with Revolt. “I’m amazed at the people that have the pieces. I always wondered why people want something so bad when you have everything. What do you need this stuff for? What does it do for you? I didn’t learn that until I started collecting other work from other artists. What I noticed is it made me happy and it made me happy to share it.”

A little more than a year ago, Usher posted an Instagram image of RETNA, explaining his appreciation for the artist.

Me and the homie RETNA finally got up! Amazing….get into it! His work is the shit!!!

RETNA has been commissioned by several companies, including Louis Vuitton and Nike. RETNA’s also been hired by musicians, designing the album cover for Bush’s The Sea Of Memories, for instance.

In the interview with Revolt, which can be seen below, RETNA also discusses his graffiti style, saying it is also likely inspired by his early education and an emphasis on penmanship.