Madd Illz and Lush One have announced a joint tour slated to feature the former Grind Time Now partners battling.

“We are settling our differences in the ring and making a tour out of it,” Madd Illz says in an exclusive statement to HipHopDX. “We will battle for a total of three rounds at three minutes each. Each stop will have a performance by the both of us as we will be releasing music and we will battle for one round apiece. We will alternate between the three rounds and collect the footage via our own personal traveling cameraman. We are making a documentary that will cover the fallout between us and it will be presented with all three rounds edited together from all of the cities.”

Madd Illz says that he and Lush One have a greater goal in mind with these battles.

“The overall goal is to teach others that it is better to work together,” Illz says. “We run large YouTube channels and in the YouTube world, it is not about competing against channels. I think battle rappers are the only ones who haven’t figured that out yet.”

Despite the reconciliation that the two seem to have had, Illz says their battles will not be affected by the partnership.

“Make no mistake,” Illz says, “When you come to the battle, you will not catch watered down bars. We are looking to expose each other on the battle field.”

Lush One and Madd Illz were once partners, along with Drect. The trio helped the Grind Time Now brand become one of the more prominent Battle Rap leagues in the world. Financial disputes, allegations of theft and creative differences were among the conflicts that came between Illz, Lush and Drect.

Illz says that his reconciliation with Lush One is not set to be harmed by their battles.

“The number one thing that tore us apart was lack of communication,” Illz says. “I will be working with him everyday on the tour so it will be very different.”

“We waited a long time until we brought in Lush, and I don’t want to paint him out as a bad guy, but I believe that was…bringing on cats from the West Coast, we all knew them from Scribble Jam,” Illz said. “That was my main thing; I had been at Scribble Jam and battled at Scribble Jam since 2003 all the way to 2008…I think it was. So like, I knew all of those cats too. It’s just he lived out there, so he brought them along. I feel like if I could’ve set up the company with Drect alone, got all the paperwork settled and we would’ve moved forward and got our business straight, that’s what I would have done differently.”

In April, Lush One also spoke about Illz’ involvement in Grind Time Now.

“He’s basically run Grind Time into the ground on some dictator shit and doesn’t even realize,” Lush said in an exclusive interview with HipHopDX. “He’s like Hitler. It’s like the end of World War II and he doesn’t realize all the fuckin’ missiles are descending upon him. He’s still delusional like, ‘No! I’m the strongest man in the world.’ I feel bad for him. You know what I mean? I think he’s really fuckin’ trippin’ right now. But it’s like, he’s not a bad guy.

“I’m just irritated when I hear him publicly bragging about money he’s making off the YouTube channel, which is money I fuckin’ generated,” Lush added. “I still haven’t been compensated fully from YouTube from the past. You know what I mean? Shit like that. These are all reasons why. You know what I mean? I don’t know. At his core, he’s not a bad dude. I just want him to fuckin’ get right.”

The two plan on hitting 30 cities, according to Madd Illz. A promotional flier for their battle tour can be found below. 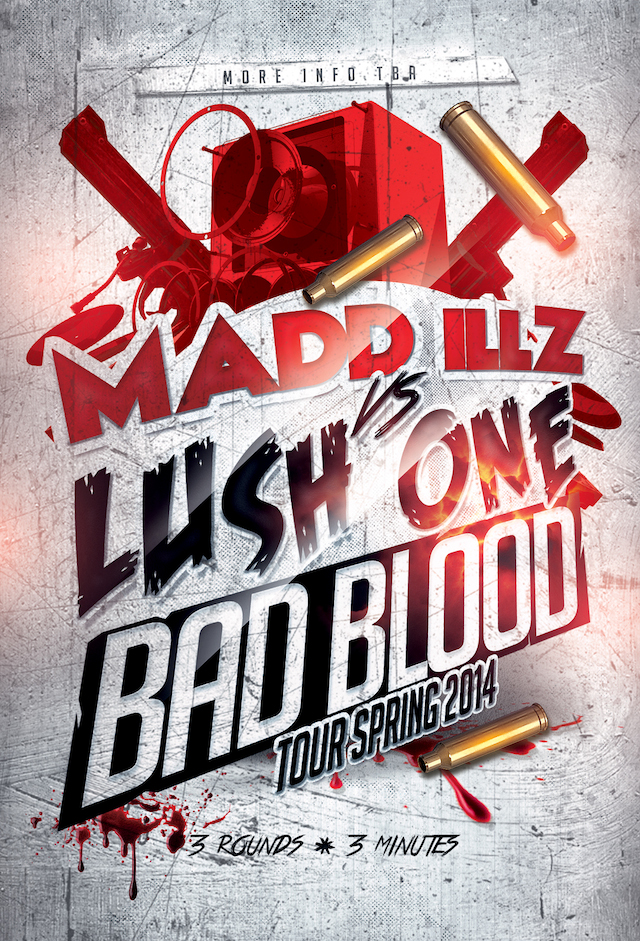