adidas has been known to always carry the shell-toed shows that Run-DMC made popular during the 1980s. Now, the sneaker giant is making a direct correlation between the famed rap group and the shoes it helped popularize.

The Run-DMC Superstar 80s come with a printed leather sockliner, regular and fat lacing and elastic tongue construction, which allow those sporting the shoes to wear them without laces, just like the Queens trio did back in the day. 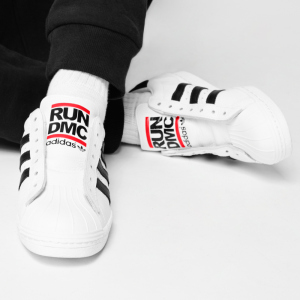 adidas has also dropped classic Firebird black and white tracksuits and Trefoil t-shirts, which are available via the clothier’s website. The limited edition Superstar 80s will be available in September.

Run-DMC’s 1986 song “My Adidas” was included on the group’s third album, Raising Hell. About adidas footwear, the cut was rereleased in 2000 and reached No. 33 on the Hot Rap Singles chart.

A-Trak discusses the song in an adidas promo video for the shoes.

“Specifically the song ‘My Adidas’ is the first of its kind in the sense, of Hip Hop, in the sense of a rap record by a credible group that’s about a piece of clothing that they wear and that was in no way perceived as a sell out move or anything,” A-Trak says. “It was more sort of a victory of, ‘Oh, wow. We got this brand from Germany to recognize that they’re part of our outfit.'”

Check out the adidas video presenting the clothing below:

RELATED: Run-DMC & A-Trak Team Up With adidas For Interactive Video