Speaking on his now infamous 2012 battle with rap legend Canibus, LA-based battle emcee Dizaster recently spoke with VladTV about one of last year’s most memorable battle events, an affair that ended up with Canibus embarrassingly relying on his notepad to finish the battle.

Referencing Canibus’ previous feud with Detroit superstar Eminem, Dizaster said that, “they did the track thing but they never got in each other’s faces [rapping]. That shit would have been crazy, I would have loved to see that shit, but I got to kill him, so you know what I’m sayin’, you’re welcome Em.”

Canibus’ involvement in the DJ Skee-hosted KOTD battle was, Dizaster says, clearly financially motivated. In an exclusive interview with HipHopDX earlier this year, Dizaster remembered that Canibus, an emcee the LA native admits to idolizing as a young Hip Hop fan, “did that for the money, really. I don’t know if it was respect no more. Maybe it was. I think he was just stupid. I think he took a paycheck and didn’t weigh in the consequences.”

In this recent interview with VladTV, Dizaster took the time to remember more specifically how the event was put together: “I remember he was interested in doing a battle, he wanted to do a battle and as they were talking with him, there was nothing setup and he went and dissed me on a record. He said some crazy shit, he was like, ‘Yo, Dizaster, ayo, I’ll eat him for practice,’ he had one of those lines. Yo, I fuck with Canibus. People think I’m always making fun of him and shit. He was one of those dudes that I grew up really fucking with, he was the best.” Canibus’ pre-battle slight was certainly at least one catalyst for Dizaster’s subsequently hungry performance.

Dizaster also said that Canibus unfortunately didn’t live up to the world’s expectations given his previous history as a fine tuned, aggressive lyricist. “My whole thing is that he was looked at as a crazy freestyler,” Dizaster says. “He doesn’t know how to freestyle. There’s two different types of battlers in the world today. That’s why I respect certain battlers. I fuck with certain battlers and there’s certain other battlers, I fuck with them, too, but I can’t have that respect level for them…He couldn’t deal with that…He showed up to the fucking battle and he couldn’t even spit the shit that he had written and when he was supposed to at least be Canibus the super freestyler he went and asked his friend for the notepad, and you could tell his boy didn’t even want to give him the shit. I was looking at his hand and he was shaking while he was holding the pad, and it’s crazy watching a dude that you idolized growing up and he’s shaking in front of you.” Despite the obvious loss, Dizaster was quick to note with a laugh that “[Canibus] got a lot of money.” 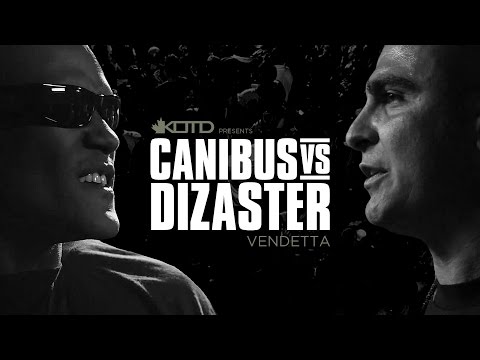 Following the performance, which appeared to surprise to nearly everyone in attendance, Canibus and Dizaster exchanged reportedly cordial words. “It was fucking weird as fuck,” Dizaster says. “It’s Canibus, bro. Just listening to the motherfucker, you always hear him in your head as that Channel Zero guy that destroyed the government and all this shit. He’s like a hero and shit. Coming up and he’s just like ‘sorry man’ and all this shit, which was cool, but I don’t want him to apologize to me. He fucked himself over. At that point, I didn’t even want him to apologize to me ‘cause I was thinking about his—if you really look in the third round I held back, I have so much fucked up shit to say about Canibus…I was just starting with the head chopping.”