Jay-Z released the lyrics for “Crown,” “Picasso Baby” and “F.U.T.W.” today (July 2). Although “Crown” was not included on the tracklist for his forthcoming Magna Carta Holy Grail album, Jigga has included hidden tracks on some of his previous releases.

On “Crown,” it seems as though Hova takes a shot at sports agent Scott Boras, though the lyric sheet lists him as “Scott Boris.” Boras was the former agent of New York Yankees second baseman Robinson Cano, whom Jay-Z signed to his Roc Nation Sports agency this spring.

The lyrics also include the line, “It’s a new day, hit up KD.” “KD” is likely a reference to Kevin Durant, the Oklahoma City Thunder forward whom Jay-Z signed to Roc Nation Sports last month.

“Crown” clocks in with two verses, according to the lyric sheet.

The lyrics of Magna Carta Holy Grail-opening “Picasso Baby” find the Brooklyn businessman discussing his lavish lifestyle and proclaiming that, “I just wanna live life colossal.” In the third verse, however, he imagines himself being arrested.

“F.U.T.W.” discusses Jay-Z’s rise from poverty to success. He also includes some politically-charged lyrics, including the lines, “America tried to emasculate the greats / Murder Malcolm / Gave Cassius the shakes.”

The “Malcolm” Jay-Z references is likely Malcolm X, the minister and human rights activist who was assassinated in New York, New York in 1965. The “Cassius” referenced is likely Cassius Clay, the boxer who later changed his name to Muhammad Ali. He was arrested and incarcerated in the 1960s after being found guilty on draft evasion charges. 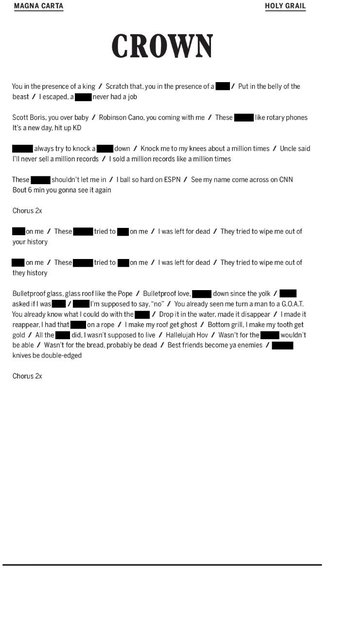 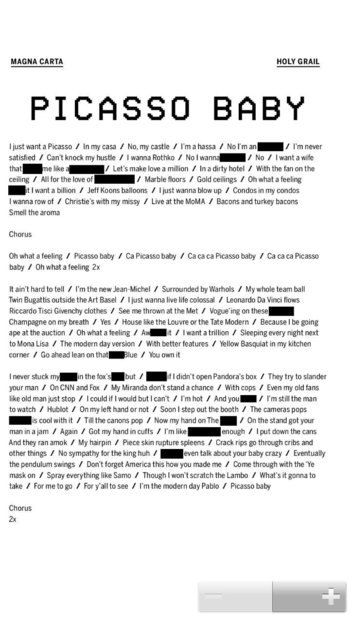 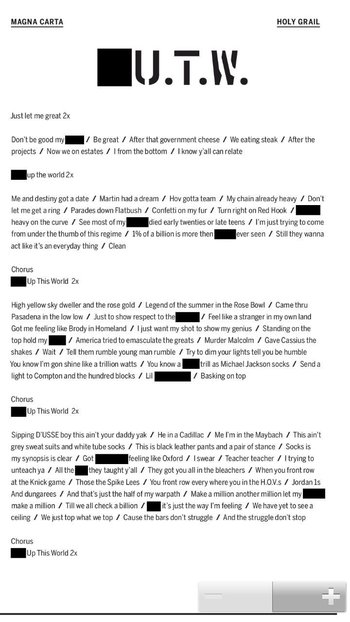