Jay-Z keeps the headlines coming, as the latest lyrics revealed from his upcoming Magna Carta Holy Grail serve as a diss towards Lil Wayne.

On Jay-Z and Kanye West’s track “H.A.M.,” where Jay raps, “I’m like, ‘Really, half-a-billi?’ / Nigga, really, you got baby money / Keep it real with niggas, niggas ain’t got my lady money,” Wayne took the bars as a diss towards Cash Money head honcho Birdman, a/k/a Baby.

In response, Wayne dropped “I’m Good” on Tha Carter IV, rhyming, “I got your baby money / Kidnap your bitch, get that how much you love your lady money.”

Though both verses dropped in 2011, it appears Jay-Z hasn’t forgotten about the bars aimed at his wife, Beyonce.

The two emcee’s history of subliminals began in 2009, in an interview where Birdman claimed Wayne was both more lyrical and made more money than Hov. Jay brushed off the notion in an interview with Angie Martinez on Hot 97. Later, at a pre-Grammy party in 2012, Wayne spit a few bars dissing Jay-Z and Kanye West’s group, The Throne.

It was also heavily speculated that Jay-Z’s verse on “Watch What You Say to Me,” a track from T.I.’s 2007 release T.I. vs. T.I.P. contained subliminals aimed at Wayne, but was never confirmed.

So far, Jay has dropped lyrics to “BBC,” featuring Nas, Justin Timberlake, Beyonce, Swizz Beatz, and Timbaland, “Part II (On the Run),” featuring Beyonce, as well as others.

Magna Carta Holy Grail hits shelves July 4, save one million Samsung Galaxy smartphone users, who will get the album for free via app.

Check out the lyrics to “La Familia” below: 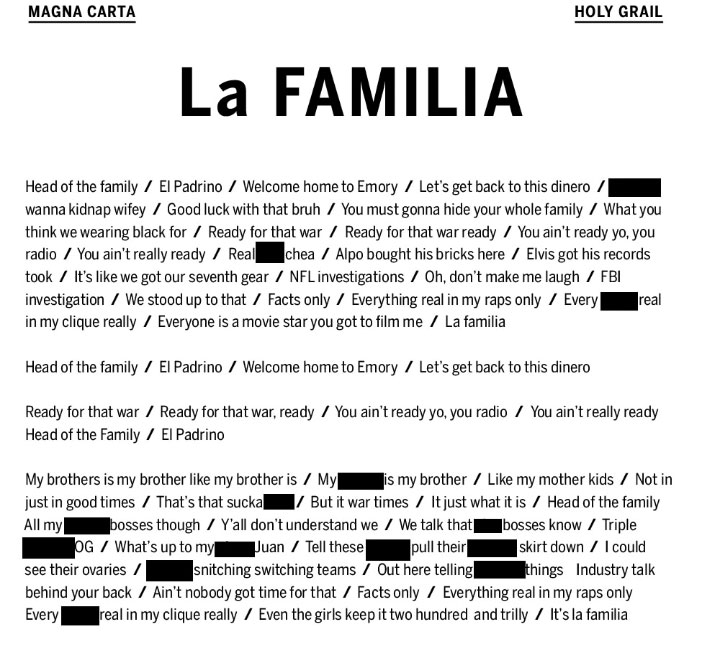 RELATED: Jay-Z Releases Lyrics To “Versus”