Robin Thicke didn’t get his first choice. The singer wanted comedian-actor Kevin Hart to appear in the video for his “Blurred Lines” single, in which he imagined having married men running around chasing girls. But Hart was in New Orleans shooting a movie. Thicke needed a new plan.

“So then I thought, ‘Who else is a great example of being a married guy or a dad?'” Thicke said during an interview with Big Boy’s Neighborhood on radio station Power 106 in Los Angeles. “We all know T.I.’s got a family. He’s got kids. T.I. was not on the song. I reached out to T.I. and was like, ‘Hey. I think you’d be perfect for this,’ and he just nailed it, murdered it.”

Thicke worked on “Blurred Lines” with longtime collaborator Pharrell. The song’s studio session was more fun than work. “We had this great chemistry,” Thicke told Big Boy. “We cut the whole song in an hour, besides T.I.’s part. We made the whole record in an hour and were walking around the studio like two old men hollering at young girls from the porch. So it’d be like, ‘Hey, girl. Come here.'”

“Blurred Lines” appears on Thicke’s forthcoming Blurred Lines album, his sixth. Due in late July or early August, the LP also features Kendrick Lamar and 2 Chainz on “Give It To Me.”

For now, though, Thicke is enjoying the success of his “Blurred Lines” single. “It’s a dream come true,” Thicke says. “I love making music, but I never really try to think of radio formats. I just make music I want to hear. It’s really nice when you hit something and it pleases the masses. It’s really nice.”

UPDATE: Robin Thicke’s publicist has confirmed that Blurred Lines will in fact be the title of his sixth album. The July 5 album will include contributions from T.I. and Pharrell on the titl track, as well as Kendrick Lamar on “Give It 2 U.”

The tracklisting and artwork to Thicke’s Blurred Lines is below: 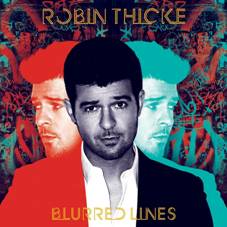