Kanye West Pictured On The Set Of "Anchorman: The Legend Continues" The Adam McKay-directed Anchorman: The Legend Continues, the sequel to 2004’s Anchorman: The Legend of Ron Burgundy, has already garnered a tremendous amount of buzz due to the A-list cameos expected in the film. Among the latest acts to join the growing list of Anchorman 2 cameos is Chi-Town rapper Kanye West.

Hollywood.com reports that Kanye filmed what was possibly a fight scene on top of a rooftop in downtown Atlanta this week. Other actors present during filming included Christina Applegate and Paul Rudd.

As of now it’s unclear if the rapper will appear in any other scenes in the movie. Other celebrity cameos in the film include appearances from Tina Fey, Amy Poehler, and Liam Neeson.

Anchorman: The Legend Continues is currently set for a December 20, 2013 release. An alleged picture of Kanye on the set of the film can be found below (via E Online). 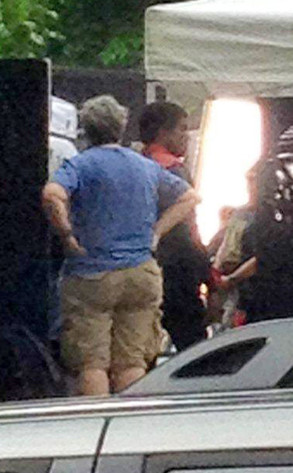