Following Justin Timberlake’s three-week at #1 sales juggernaut from March 15 of this year, The 20/20 Experience, the former N*Sync star has confirmed a follow-up, and earlier than previous reports.

This weekend, Timberlake instagrammed a photograph of him recording—as pointed out by MissInfo.TV. On a studio monitor in the foreground a hand-written note of the album title and release date was included. Timberlake reports that 20/20 Experience (2 of 2), as presently titled, will release on September 30. 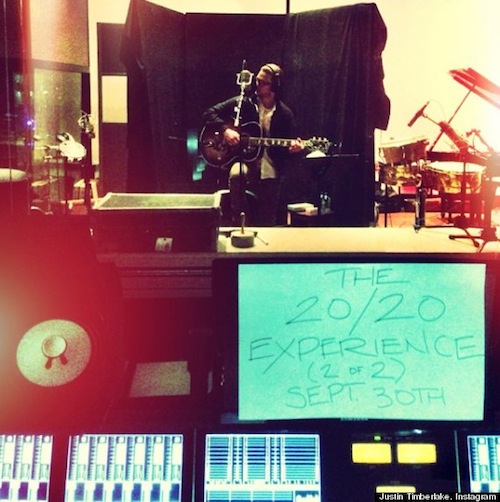 Previous reports, from Timberlake collaborator ?uestlove of The Roots, alleged that the LP would release in November, featuring “10 songs now, 10 songs later.” Timberlake broke his silence on the surprise two-album effort the week of his album release, confirming that a follow-up was in fact underway for 2013.

UPDATE: Justin Timberlake’s The 20/20 Experience – 2 Of 2 is streaming on itunes.com. The LP is slated for release September 30 and includes the single “Take Back the Night.”

The collection features appearances from Jay Z and Drake, according to the itunes page that features the album stream.