Skull Gang member and Juelz Santana affiliate Hynief posted a picture on his Instagram this past weekend seemingly portraying JoJo Simmons in a compromising position when they met in Queens, New York, accompanied by the following description: “Guess who I caught y’all Lil punk ass Jo Jo [sic] that made the diss track look at his face when he ace! #facts shouldn’t pop shit if u not bout that life real niggas don’t care who u related too fuck nigga.” Hynief also reportedly forced JoJo to call and apologize to Skull Gang-founder and Harlem rapper Juelz Santana for a recent diss track. 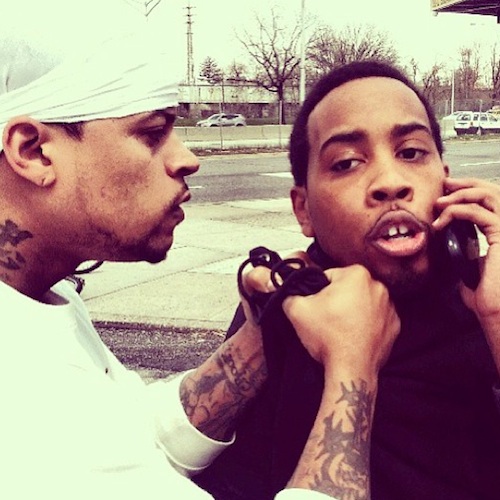 In a just-released video interview with Crave TV 6, JoJo stressed non-violence, saying: “I’m not gonna talk no crazy shit. That’s what [Skull Gang does] and I do what I do at the end of the day, man. I grew up a very good kid and all that other shit. So they can stick to that violence stuff, but me…I’ma stick to just getting money. ‘Cause all I been around is money all my life. I ain’t been about all that thug [and] all that gun shit all my life so that’s not what I do. What I do is count money and fuck bitches and I travel the world. That’s all I do. I’m not about that violence shit. This ain’t no shit-talkin’ or none of that. This me keepin’ it real.”

In the video JoJo was backed by some more confrontational affiliates, self-described as members of the Crips, who seemed to throw some obvious threats towards any more violent action towards the second-generation Simmons emcee.

JoJo fired back at Santana with a full-out diss song of his own later that month called “Holy Water,” rapping: “Now how you gonna mention my uncle Russell / The industry forgot you fucker, you nothin’ special /…Simmons will not let you / Compare your money to my uncle / That’s just disrespectful / You’re not eligible.”