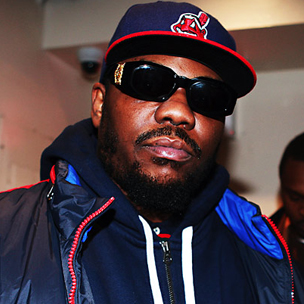 Five months after his arrest on drug and gun charges, Beanie Sigel has waived his hearing during an appearance this week in Folcroft District Court.

According to The Reporter, the former Roc-A-Fella Record signee showed up “shackled and wearing prison blues,” looking “portly but seemingly slimmed down.” The rapper, whose real name is Dwight Grant, appeared before Magisterial District Judge Edward Christie and waived his preliminary hearing on all charges. Though he said little during the proceedings, he smiled when the judge wished him good luck.

Sigel was initially arrested on August 29th following a traffic stop. After discovering marijuana and prescription pill bottles on the driver, police found a bottle of codeine syrup and $4,500 in cash in his pants. He also allegedly had pills in a cigarette carton in his pocket and was placed under arrest. A gun was also found in the center dashboard of the vehicle.

He last appeared in court in September to face gun and drug charges. Prosecutors requested a continuance in the proceedings against him so that lab results on the alleged drugs found on his person would be ready. This allowed for Sigel to be transferred from Delaware County prison to begin his two-year sentence for tax evasion.