It’s great to hear three emcees from three different corners of Hip Hop coming together and making one solid track (in Stankonia studios, no less). The good news too is that they’re all on the come up and deserve their respective successes. With The Flush (f/k/a Royal Flush) on the beats, “The Sparks” is a calm track with poignant lyrics. The song drums up feelings of the past, but it’s still progressive. The Royksopp sample adds just enough of a varied sound to the cut too, as the Norwegian duo’s song is titled “Sparks” and fits perfectly within the landscape of the track these artists created. I didn’t get to show up to A3C, but if I had known these three were performing this song, then I would’ve collected my frequent flyer miles and headed right down to Atlanta to hear it. – Kathy Iandoli (@kath3000)

Listen to “The Sparks” by Thurz, Los & Skyzoo

Already responsible for one of my favorite mixtapes of the year (Popular Culture), XV is joined by Sez Batters, Freddy High and The Awesome Sound for his latest project Squarians Vol. 1. While injecting intelligence back into beats that have been held hostage for weeks thanks to brain-dead freestyles from everyone and their mother, the tape also contains tracks like the autobiographical “Be There, Be Square” which absolutely blew me away with its self deprecating honesty when it comes XV’s  early years as an emcee trying to be someone he wasn’t. “I used to rap like Mase back in nine-eight / Bubble goose and black pager strapped to my waist / Acting like Harlem was a half-mile away / The niggas at the mom & pop would laugh in my face.” As the track goes on we hear that trying to play Biggie and Hov, dressing in Versace and popping bottles did nothing for XV’s career – not to mention sex life. Then comes the realization and self-acceptance that he’s really just a guy from a small town that skateboards, listens to Nirvana and can work Stooges references into his rhymes to craft the perfect metaphor. If XV was still watching the throne instead of a chair “waiting for the crown he’ll never wear” he still wouldn’t know who he was and neither would we. Thankfully things didn’t work out that way… – Michael Sheehan

Listen to “Be There, Be Square” by XV

In my formative years, Aesop Rock was transforming from one of the artists for those “in the know” to a true independent Hip Hop juggernaut. I remember many of my high school/college friends quoting his raps, and intricate verses. Like many, I always appreciated Aes more on paper than in song. Still, as a big fan of RJD2, El-P, Copywrite and the like, Aesop’s music was usually close-by, as well as DVDs, interviews, etc. I fully believe that  Skelethon is his best work to date… this is the Aesop Rock that I truly get and appreciate. “Homemade Mummy” as a video is simple. It’s just guys having fan in a warehouse arcade (that I desperately hope to find), but it’s a nice play against the dense lyricism that the New Yorker always upholds. Skelethon is a fixture on my Year-End list, and although he’s forever a Def Jukie, Aesop Rock won me over the last few years as Rhymesayer – Jake Paine (@Citizen__Paine) 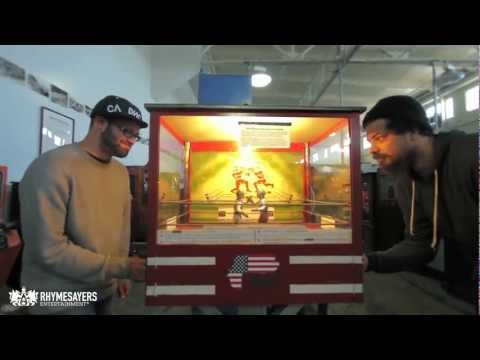