Wichita, Kansas native, XV is a prime example of shining beyond margins. He is one of the leaders in this new wave of Hip Hop, which has consistently been proving that buzzing artists are no longer confined by their residence in a secondary music market. Moreso than physical restraints, artists are also succeeding in just being themselves. The self-described “square” is from a city best known for introducing the world to the Yellow Brick Road- a fact hardly associated with Rap. He’s completed songs inspired by video games, before bars inspired by corner hugging hustlers. As the 26-year-old emcee gains even more recognition, he offers the refreshing sentiment of only being true to himself.

XV’s work ethic is impeccable, having released 16 mixtapes since 2006-at least two per year. He outworked everyone in his lane on his 2008 tape, 40 Days/40 Nights, an unfathomable collection of 80 tracks, mixing freestyles and original songs. In 2009, XV made his mark in the industry with the DJ Enuff-hosted, Everybody’s Nobody tape- it was enough to catch the ear of big city slickers and get him signed to a major deal. As we anticipate his Warner Brothers debut, The Kid With The Green Backpack in 2012, fans can rest assured that he’ll give them a treat while waiting for what he calls “the show.”

HipHopDX caught up with XV at this month’s A3C Festival to talk about the long-awaited LP, losing his shirts onstage, and how his Rap influence on Wichita relates to Batman.

HipHopDX: What’s up with the LP? Is it finally done?

XV: I’ve made The Kid With The Green Backpack five times already. I made my very first one in 2008. I had a YouTube, vlogs of it and everything. We had live band, live orchestra, live horns… Me and Seven completed the whole project. I was actually going to distribute it with iHipHop [Distribution], but just as that was happening, I started working on Everybody’s Nobody and I started making better records and I didn’t want to put that out yet. That was the very first one, then we made another one, and we made another one, we actually made one last year and it wasn’t complete- out of 14 tracks we had maybe 10 or 11 of them, and then I got signed to Warner Brothers [Records].

When I got signed to Warner Brothers I was like, “Okay, now, let’s make a real album.” Just Blaze actually wanted to sign me before I really got shit moving with the label and everything. So when I got my deal, I automatically came to him like, “Can we still work?” and he was like, “Of course.” That’s how he came to be executive producer of the project, so now we starting from scratch again, all over. But starting from scratch, we started about five months ago and we’ve got about five records done. Not done but we have five mean records. Just Blaze and Seven did two of them together and Just Blaze did one smash, smash record. It’s so powerful. But we’re just focused on continuously building so that when I do drop the album, the world’s listening, not just the XV fans, or the Squarians. The world. The world, Craig. The world. 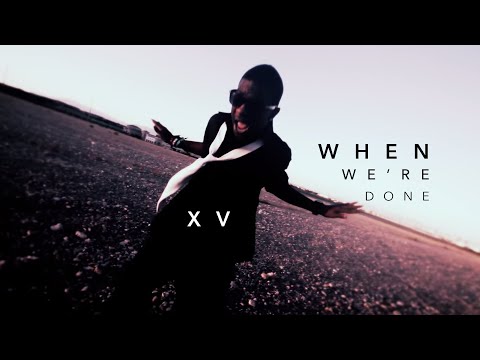 DX: So you and Seven are still working together on the album?

DX: How are they together in the studio?

XV: Those two together in the studio was really magical because they’re influenced by each other. Like, I’m influenced by Andre 3000, I’ll never be able to rap as good as Andre 3000, but being around him, I can learn certain tricks that will make me excel better than what I’m doing. Being around him, Just Blaze is teaching Seven shit like, “Oh. Oh. You layer your drums like that? You stack that sample like that? Oh, okay.” And it’s all coming through my project. I’m winning, either way! No matter how this goes! I’m winning.

DX: Will you bring in featured artists for The Kid…?

XV: Actually, I’m really big on collaborating with other artists. I’m not that type of artist who’s like, “Make sure everybody hears me.” Because, my story’s gonna get told, no matter who’s on it. Like, if I do a play about my life, I’m not gonna be the only person on that stage. I’m gonna bring characters in. So, The Kid With The Green Backpack is a story and I’m bringing characters in to help me tell the story. There are a lot of people that I want to involve in it – Common is one person… I’m also making a comic book with my album and I wanna see Common in my comic book so I said, “He should be on my album then.” The Kid With The Green Backpack – I’ve created a whole universe with this: comic books, video games, iPod games, and a movie. I’ma direct and write the movie.

DX: Which quarter are you looking at for its release?

DX: You work really hard at your tapes though. There’s always another one coming… Do you do it to primarily feed your fans in the meantime?

XV: Not only feeding the streets but bringing awareness to my name, my brand and what I stand for. Like I said, I want the whole world to tune in when I tell The Kid With The Green Backpack story. I drop each mixtape… I could have 100 mixtapes, it’s not about me getting on with the mixtapes. I’m not brining more and more people to the show. They’re just tickets. I’m just handing out tickets, like, “Here’s a ticket to the show.” Then next thing you know, 150 mixtapes later, I’m going out to tell the story and it’s a million people out there. Not 30,000. Not 100,000. Not 200,000. A million people, because I’ve just been feeding them. And you know how the crowd comes and they’ve been there for a while, they get bored, that’s why I hit ‘em with the records, and then while I hit them with records, more people show up – that’s the main view of it.

DX: I’ve seen you live before [Laughs]. You have a ton of energy on stage. More than I’ve seen from most rappers.

XV: A lot. A shitload. My t-shirts pay for it. I have never left a show-and I’ve toured extensively – I’ve never left a show in the t-shirt I was wearing. They pay for it extensively, but you know what? I perform every show as if it’s the last show I’m gonna do. I got into a crazy car crash in Houston, on tour, and I flipped off the highway with four other people with me, and none of us got hurt – at all. I had a scratch on my arm, but… I’m talkin’ ‘bout, we spun, flipped, and I could’ve died right there.
I wanna make sure that if that ever happens, then the show I did last night is remembered and if all the videos came out, like, “XV’s Last Performance”… even when I get older and I’m doing my greatest hits, I’m still gonna have that mentality, because I want to make sure that… I don’t care if it’s five people in the crowd I’ma perform like it’s 5,000 in the crowd, just to make sure I’m giving everything… To me rappers go onstage and tell  people to do this, do that, do this, do that, but they don’t want to give themselves, so… I feel like if I give myself, then they’ll give me more of them. It works out.

DX: So your story for the album is set?

XV: It’s a whole concept. I’ve wrote out the story but I’m not gonna tell you the story because we’re a long way from it but like, they’re working on [the Batman comic] Dark Knight Rises right now, you don’t wanna know the story right now, because you have seven months to decipher what’s probably gonna happen. So I’m not gonna tell the story, but I will say this: It’s like Pink Floyd’s The Wall, meets Kanye [West]’s College Dropout, meets John Mayer’s Room For Squares. That’s what the album is. Pink Floyd has this song on The Wall album [sings the chorus to “Another Brick in the Wall”], that song inspired one song on my album. Then John Mayer has a song [sings chorus to “No Such Thing”], that chorus, those four bars inspired another record on my album. I just took that like…

DX: You’re moved to write about anything though, I’m guessing. Like with “Mirror’s Edge”…

XV: It wasn’t like, “I wanna write a song about this,” and found a beat. The beat sounded like a beat in the game. I asked dude like, ‘Did you sample Mirrors’ Edge on this?’’ and I was playing it at the time. He was like, “Nah.” And I’m like, “It sounds just like Mirror’s Edge.” And that’s how I came up with, “It feels like I’m running on walls.” Because the game is all about free-running, there’s this girl running on walls, and it relates to so many people. So when you say I draw inspiration form so many different people and different things… You never know. There are people who’ll read this interview who’ve never heard “No Such Thing” by John Mayer. Who haven’t listened to Pink Floyd’s The Wall. And those records changed my life. This is my own interpretation of it.

DX: So that clichéd line about rappers putting their hometown on their back… How do you feel? Do you have Wichita on your back? How many rappers are out there that we don’t know about?

XV: There’s gonna be a lot, not because of me, but because I’m inspiring. I won’t say, ‘I got the city on my back,’ but I am inspiring my city. Today I was on 106 & Park [the show aired his BET cypher], and I didn’t even know this. My city was going nuts. It’s kinda like finding out you have a superhero in your city, and it makes other people feel like they can be a superhero. If you think about Batman, when Batman started running the streets, remember all those other guys started wearing costumes, dressing up as him, because they said, “What makes us different than you?” I wanna inspire people like that.