Where is the love? Donny Hathaway posed this question in song back in the ’70s, when love poured through soul music as effortlessly as Luther Vandross’s brilliant runs, or the trademark ooh’s and aah’s of Motown. But decades later, it seems like the fundamentals of soul are all but nonexistent. One would never think that an emerging soul artist has found a home at Young Money Cash Money Billionaires (YMCMB). With superstar acts like Drake and Nicki Minaj, YMCMB has a proven track record with turning unknowns into household names, and they’ve struck gold with PJ Morton. As a Grammy-award winning keyboardist in the behemoth Pop Rock band Maroon 5, he’s used to radio-driven anthems to sold out arenas. But he can easily scale back from the flashing lights and electrify a lounge crowd with a live show that’s a must-see (his performance of the Cheers theme song is a delight).

To generate anticipation for his upcoming full-length album, Morton released a solo EP, Following My First Mind. In an age when music on smart phones seem to have a two week expiration date, Morton’s EP has strong staying power in songs that aren’t easy to replace. He was inspired by the classics even more than ’90s R&B: “I went through a weird stage, like early high school, where I really listened to Stevie [Wonder], and didn’t listen to anything else. He came to my life and changed my perspective on writing and just music and melodies. So it was Stevie, and my mom put me on to The Beatles at a very young age. And I was very influenced by their writing. Prince was an influence of mine, especially on the live side of things.”

Morton’s broad influences makes the five songs of Following My First Mind feel like a complete body of work, and he has a clear vision for his solo persona: “I grasp from so many places, and that’s why I wanted to give the EP away for free, because I wanted to introduce myself while I had these new worldwide eyes looking at me and these new YCMB eyes. I didn’t pick anything genre-specific. ‘Saying Hello’ is a Beatles song, ‘Heavy is a new age blues song, and ‘Lover’ is a straight-up R&B/Hip Hop song.” He’s not interested in shocking anyone with his music, no Brian McKnight obscenities here: “People know when you’re not being real and when you’re not being authentic. I’m not trying to shock anybody, I’m just trying to tell my story.”

Young Money’s leader, Lil Wayne fit right in the pocket on “Lover,” as he does on most R&B tracks, a la Robin Thicke’s “Pretty Little Heart.” It sounds like Wayne and Morton recorded the bluesy track in a smokey studio together, but it was created via e-mail. Morton explains: “I sent it off to him, and once he loved the song, he knocked off the verse and sent it back to me. It’s exciting being in the studio and working together, but the anticipation of waiting for the person to come back, was a cool thing as well. Even though we’re working together now, he’s [Lil] Wayne to me.”

Morton also scored a duet with R&B songstress Jazmine Sullivan, and may even be the reason why she’s returning to music: “It was a shot in the dark. But I was clear that I didn’t want anyone else on that song. I just heard Jazmine in my head from the beginning. So when she said yes I was pleasantly surprised. I guess I caught her on a good day. [Laughs] But I hear that she’s working on a new record.” 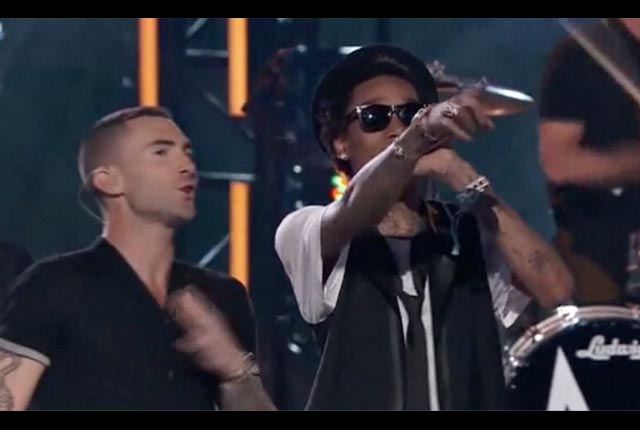 While Morton has given listeners an appetizer of his upcoming project, they’ll have to wait a few months for the main course. Maroon 5 is readying their latest album, and their lead single, “Payphone” is making a rapid ascent up the pop charts with a little help from Wiz Khalifa. The pairing is a mutually beneficial one: “We were aware of his impact, and it [went] both ways, Wiz [Khalifa] needing that pop. Everybody [in the band] was a fan of Wiz and cool with him. We wanted someone cool, who wasn’t necessarily all the way out there. It was a cool thing and we enjoyed working with him.”

A massive Maroon 5 tour will surely follow, but Morton is steadfast in making sure that his first solo effort will be a memorable one: “Following My First Mind has become a daily mantra. I’m only going to follow what I feel, and just trust that, believe that, I was signed because people believed in who I am and I have to stay that person.  So it’s really that simple for me. Just follow my first mind creatively, and trusting that little weird thing that makes me who I am.”