While Talib Kweli and Yasiin Bey were recently hitting the stage in France, a fan shot some of the live footage and released it via YouTube. The video begins with “a special shout out” to members of De La Soul said to be in attendance at the show. The performance soon leads to a cover of De La Soul’s “Stakes is High,” with a surprise guest appearance.

Posdnuos joined the duo on stage for his first verse on the track, while Yasiin and Kweli continued on until the chorus. The cover was also celebrated by a shout out to J Dilla at the start of the performance. 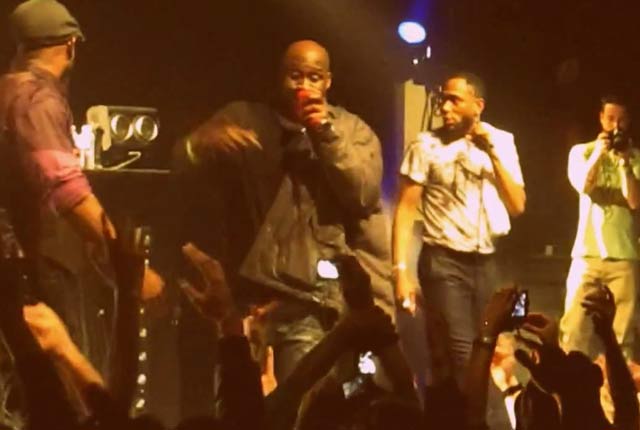 Late last year, Talib Kweli spoke with HipHopDX about his chemistry with Mos Def on stage and the likelihood of a potential new album from the group.

“I met Mos Def as a fan,” he explained. “When I first met him, I was a fan of Urban Thermo Dynamics, the group he was in. So, I always had respect for his craft. But, we didn’t meet because of that. We met because we had children the same age. Our children’s mothers became friendly and we just started hanging out family-wise, you know? That’s how we met and then became like brothers so the music came out of that.”

Kweli also discussed the possibility of new music from the duo.

“We are just in the process of recording over beats we like,” he said. “We were recently inspired by listening to some Aretha Franklin music, to do an Aretha Franklin project. Whether it’s a mixtape or album, I’m not sure. At this point, we’ve recorded three songs on it, songs based on her samples or inspired by her. These projects don’t have a home. We’re both independent at this point.”