Gucci Mane Still In Prison, According To Court Records Gucci Mane is set to serve six months in prison and pay a $3,000 fine as well as restitution to a victim after pleading guilty to battery in an Atlanta, Georgia courtroom earlier today.

The sentence stems from an incident where the southern rapper threw a woman out of the moving car in January 2011 after she rejected a $150 proposition to check-in at a nearby motel.

Gucci’s lawyer originally stated that his client planned on pleading not guilty on all charges. Upon serving his time, he will have to attend and complete 12 weeks of anger management classes; is forbidden to contact the victim; and has to pay $5,090.54 in restitution for her medical bills.

UPDATE: After serving a little more than a month of his six-month sentence, Gucci Mane is reportedly a free man. According to Waka Flocka Flame, Gooch is back on the streets after just 38 days behind bars.

UPDATE #2: Contrary to Waka Flocka Flame’s tweet last night, Gucci Mane is still behind bars, according to court records. He is currently without a release date. 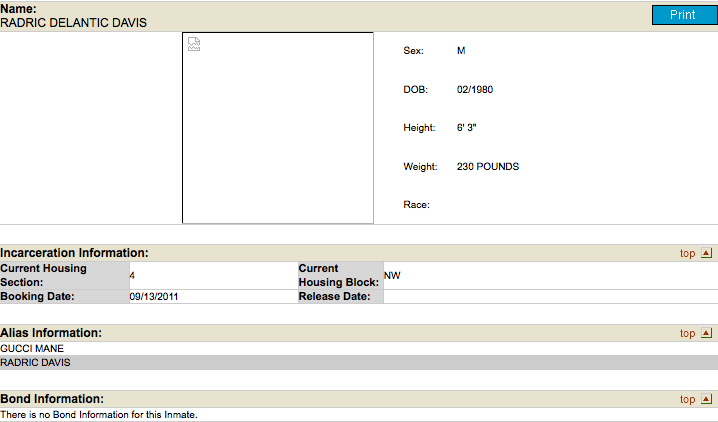