Artist Andre Woolery recently utilized an unconventional method to pay tribute to Jay-Z. He gathered 7,633 thumbtacks to create a colorful portrait of the BK rapper, titled “The Tackover.” 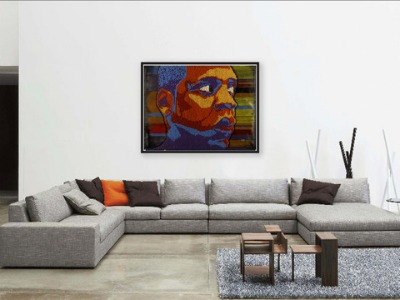 Woolery has also depicted Tupac, Biggie, Muhammad Ali, Michael Jackson, and others in his previous artworks.

In other news, Sean Price listed out his Top 25 Most Essential Songs on Complex.com. Although his top 5 consisted of all Heltah Skeltah cuts, he explained how much he regretted his No. 17 music video, “Everything Is Heltah Skeltah.”

“The video…I don’t know man. If I could take it back, I would do the video over,” he admitted. “The video was basically saying that Charles Manson fought these dudes wearing tight clothes. It was kinda stupid. I fell for it at the time…The video came out dope, but it was just a stupid idea. Like how is Charles Manson responsible for people wearing tight clothes? It’s so fucking dumb but it’s all good though.”

Price’s joint album with Black Milk and Guilty Simpson is scheduled for release on June 14.

Lastly, Ronald Isley told Billboard that he plans to enlist Kanye West, R. Kelly, and Tricky Stewart for his next album. Isley said the LP may include the rest of the Isley Brothers and will be influenced by newer artists. Talents like R. Kelly and West, Isley said, “understand what we do. They’re really up on top of that. Most of those producers learned a lot from the things we did, our early records. R. Kelly talks about that all the time. But it’s a real different thing when they’re working with us.”

There is no release date for the album yet.