Ten days ago, on March 27th, Staten Island’s DJ Megatron was gunned down in Clifton, the neighborhood in which he lived. Megatron, real name Corey McGriff, rose to fame through his work on both New York’s Hot 97 FM and BET’s 106 & Park. McGriff’s funeral was held on Tuesday.

Yesterday, April 6th, the first arrests in the case where made. NY1 is reporting that NYPD officers arrested two men, William Williams, 21, and Richard Cromwell, 20. The suspects were charged with several offenses including second degree murder, robbery, possession of stolen property, and criminal possession of a weapon.

Police have revealed no further details regarding the case. DX will keep you updated as more information becomes available.

UPDATE: Both William Williams and Richard Cromwell have pleaded not guilty to the charges of murder. They are due back in court on April 19. 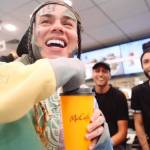 He's shown no fear of being out in public despite being warned about his safety after snitching.