On March 2, the Miami-Dade County Clerk filed a $5.6 million tax lien against rapper Lil Wayne. According to documents obtained by the Detroit News, Wayne owes the back taxes from the years of 2008 and 2009. The second set of tax penalties, in the amount of $2,258,956, was assessed 20 days after the rapper was released from a nine-month stint in prison on weapon possession charges, while the first set was assessed a month earlier while Wayne was still incarcerated. According to the lien, Wayne can refile the taxes anytime before November 24, 2020.

The lien was addressed to Wayne’s Miami Beach-area mansion, which he recently listed for sale for $12.9 million. Lil Wayne is currently on his “I Am Still Music” tour, which is grossing an average attendance of 10,000 people per venue. Tickets range in price from $60 to $110. At the time the lien was filed, Lil Wayne’s publicist was not available for comment.

UPDATE: According to Detroit News, Lil Wayne has settled the discrepancy with the IRS over a tax lien filed in March 2011. View the release below. 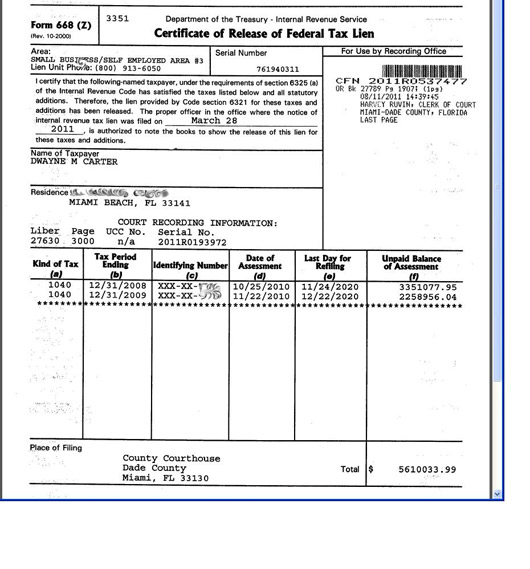