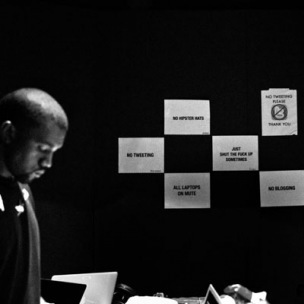 When Kanye’s critically acclaimed album My Beautiful Dark Twisted Fantasy dropped last month one of the most talked about tracks on the album was the guest filled “All of the Lights.” “Guest-filled” may actually be something of an understatement when talking about the track as it boasts no less than 11 featured musicians: Rihanna, Alicia Keys, John Legend, The-Dream, Fergie, Kid Cudi, Ryan Leslie, Charlie Wilson, Tony Williams, La Roux, & Elton John.

The track, a frantic story-song about an abusive, hedonist, has been steadily gaining airplay. In February it will be released as the fourth single from My Beautiful Dark Twisted Fantasy and now it’s come out that the cut is set to receive the video treatment as well.

Gossip site www.Hollywood.tv has obtained some behind the scenes footage on the set of the new clip, including shots of West performing the song in a dark alley. There’s not much to go on right now but we can only hope that “All of the Lights” will go the “Monster” route and include cameos from all its guests.