At a concert in University City, California that followed the release of rapper Lil Wayne from Rikers Island, Young Money’s Drake shared a phone conversation that was held earlier in the day between himself and Lil Wayne with the audience.

“I got a crazy phone call today. It went like this,” said Drake before reenacting the phone call for the audience. “I picked up the phone and said ‘hello’ and all I heard on the other end was ‘Yo.’ [I said] ‘Who the fuck is this?’ And all I heard was ‘Ahaha, its Weezy.’”

The audience then immediately reacted with screams, claps, and chants of “Weezy.” Drake followed his phone conversation reenactment with a performance of the song “Right Above It.”

While the concert in University City did not feature an appearance from Lil Wayne fellow Young Money artists Nicki Minaj and Tyga did perform alongside Drake.

Lil Wayne was released from Rikers Island on Thursday, November 4. Lil Wayne did join Drake on stage during a surprise appearance at Drake’s Las Vegas show on Saturday, November 6. 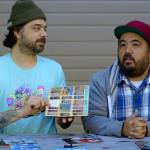