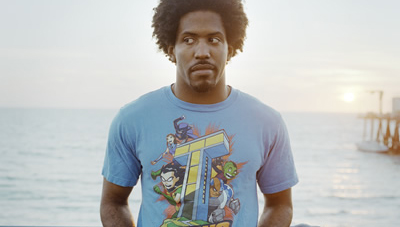 Murs ran for President with his last album, but lately he’s been running around as busy as a real presidential candidate. Aside from prepping ten albums for 2010, he’s also taking care of business for this year’s Paid Dues Festival, an annual independent Hip Hop showcase he started a few years ago. Top that off with the release of his highly anticipated collaborative album with 9th Wonder, Fornever, and you have quite a busy schedule. Murs took some time off from this hectic schedule to speak with HipHopDX yesterday, and he shared his take on why “Gangster Rap” elements may be scaring some away, why he is proud of this year’s Paid Dues line-up and why he thinks Little Brother will work things out in the end.

When asked if this would be the biggest Paid Dues yet, he responded that while it may boast the biggest names to ever grace the bill, it might not be the highest attended festival.

“I think that the backpack kids…there’s not enough white rappers on the bill, man,” he told us. “[The fans] kind of revolted against me but I tried. The white rappers just didn’t want to do it this year. People take it as a conscious effort to make it more gangster when it wasn’t. I wanted to have Ice Cube and Atmosphere, I just couldn’t get Atmosphere.”

“All jokes aside, I think the Gangster Rap aspect of it makes people nervous. But, I feel like Gangster Rap is a part of Hip Hop. Paid Dues is independent, it doesn’t matter if it’s Gangster Rap. I’m not going to discriminate.”

While some celebrated the fact that Tha Dogg Pound and Ice Cube would be on the bill, some others have been upset with the line-up, claiming Atmosphere and other Paid Dues regulars should have made the line-up as well. Murs added that this was not something deliberate.

“I don’t really comment on that,” he said when asked if Atmosphere rejected the offer. “But I reached out to everybody. People that fans accused me of keeping off this year, I reached out to. I hear people. I’m in the business of making fans happy. I always have been. But, if the people you want [there] don’t want to do my festival, all I could do is ask them and offer money. I can say there’s not one name I saw on the list [of desired artists by fans] that I did not ask.”

This backlash, he said, was to be expected. However, he told us there is plenty of reason to be proud of this year’s artists with a bill that also boasts appearances by Jay Electronica, Raekwon, Dilated Peoples, Psycho Realm, Freeway and Freestyle Fellowship.

“[The backlash is coming] more than any other year, ever, but I expected it. But, I [also] expected some of it to be eased because I expected some of my other friends to  show up to kind of ease people into the Ice Cube thing. Now, the only thing people see is Ice Cube and Dogg Pound. I don’t know how you don’t see Jay Electronica.”

“Maybe there is some racial politics that plays into it, I don’t know. I think everybody that is important to independent Hip Hop is there… I’m excited to be there. If you’re not excited to be there, keep your money, stay home, come see is next year or don’t come see us again, ever. When you’re pleasing everybody, you know you’re doing something wrong. “

Later in the interview, Murs was asked what the most surprising thing about 9th Wonder has been, a question he answered by saying that 9th has been a true friend from the start. In answering this question, he also shared his thoughts on the current situation between 9th and his former Little Brother group members, a situation that became rehashed more recently due to some Twitter posts by Phonte and 9th.

“He has things to say, too, about Little Brother breaking up. He has facts, too. Phonte has his points. Pooh has his points. They’re all valid, because I think I kind of know a lot of sides of the story. 9th has points, as well, but he won’t even stop to point them out because it’s just not worth it to him to participate in any of that. He’s not about name calling or finger pointing. I can only admire that because if it was my group, I’d probably be slinging mud with everybody. Not to say that they’re slinging mud, but I’d be one to say my piece too. “

“For the record, I’ve never heard him, really, or seen him attack anyone in the press. He’s been attacked, and not just singling Phonte or Pooh out, because that’s like a brothers thing to me. They’re all brothers and they can’t quite work it out yet, but I think they’re going to get there. But, other producers have attacked him and he lets it slide, man.”

Tune in tomorrow for more of this interview, as Murs speaks on why he may not be able to release 10 albums in 2010, though he has major plans in store.