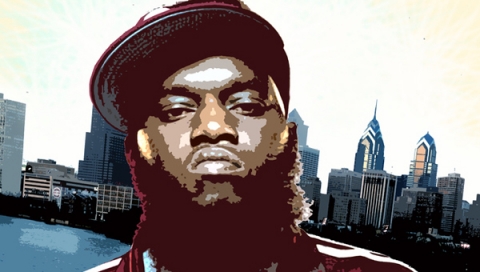 In the midst of “who’s sparring with Jay-Z next,” Freeway may very well stand as neutral. Rumors report otherwise, but the Philly rRap veteran has maintained a mantra of peace recently throughout the releases of his mixtapes The Freelapse, The Beat Made Me Do It and the 2010 full length album The Stimulus Package with Jake One. Contrary to popular belief, Streetz Is Mine is not an official Freeway album (so says the emcee), but is packed with lines that reflect some new lyrical exercises from the Roc graduate.

Freeway entered the scene at the turn of the century, earning his stripes as freshman of the Roc when the Jay-Z movement was still coming together. His debut album, 2003’s Philadelphia Freeway featured the instant hit “What We Do”, which sealed Free’s place in Rap royalty. While he, Beanie Sigel, and Memphis Bleek were the first class of the Roc-A-Fella order, Freeway managed to continue his lyrical progression despite the disbanding of his once solid brotherhood. According to Free though, there’s no hard feelings with anyone from that part of his past despite the recent internet rumblings.

After traveling to Mecca, the devout Muslim appears to be in a peaceful place and speaks candidly about his new lease on life. With a new album on the way and new artists on the horizon, Freeway couldn’t be happier with the direction of his life and career. Of course he answers the ongoing question: What’s up with you and Jay, man? Are y’all okay, man? Yup.

HipHopDX: Ten years in the game…is the cup half empty or half full?
Freeway: Damn! Ten years? Has it been that long? The cup is half full. It might be a little more than half full.

DX: You made the journey from major to indie and now a little bit of both with Rhymesayers and now Cash Money?
Freeway: Yeah we’re working on a situation with [Cash Money Records] right now.

DX: So you’ve run through a number of different channels artists go through…how has the ride been for you?
Freeway: I mean it’s just – everyday man, we’re working, trying to stay relevant. Making the best music possible.

DX: There’s been some confusion over your album/mixtape titles. There was The Freelapse mixtape, now The Beat Made Me Do It. What about Streetz Is Mine? Is that official?
Freeway: Streetz Is Mine is not official. That has nothing to do with me. I don’t know what’s up with that. The next official album is The Stimulus Package on January 19th with Freeway and Jake One.

DX: A couple years back you made Hajj (Muslim pilgrimage to Mecca).
Freeway: Yeah and actually I went this year too! I went in ’05, I went earlier this year, and I’m going again from November 13th to December 1st. The two times I went before were Ummrah – that’s like the lesser Hajj. I’m making the major Hajj on November 13th. [Editor’s note: Freeway is currently not on Hajj yet].

DX: They say you’re only supposed to perform that Hajj once in your lifetime. Why are you deciding to do it now?
Freeway: I have the opportunity to do it. I hooked up with some good brothers and felt like it was time to make it happen.

DX: Did making Hajj those two times have any effect on the direction or inspiration behind your music?
Freeway: They definitely had an effect on my life overall. Music is a part of my life so I’m sure you hear some of that in my music.

DX: A few years back on Kanye’s “Two Words” you refer to yourself as “Freshman of the Roc” when at that time you were pretty well established. There’s some humility to that statement. Do you feel MCs coming out nowadays understand how to be humble and make their way up the ladder or are they getting cosigned too fast?
Freeway: I think it is what it is for the time, you know what I’m sayin? Times change. When I was coming up it was different for me – you had to go through the respective channels and put your work in. Now it’s for what the time is. I can’t hate on nobody, I just gotta do my thing and stay relevant and make sure my peoples get on.

DX: What artists do you have in the works?
Freeway: I have my man right here Hollewood Playboy, I got my man Jakk Frost – they both from Philly and we gettin’ this whole Free Money thing together.

DX: Philly has a lot of great artists, but it never seems like it’s the next city to blow up Hip Hop-wise. Why do you think that is?
Freeway: Philly is a fightin’ city; everybody wants to fight to be on top. It’s very competitive. A lot of people in Philly is not “Joe.” Joe means they sweat other people or be on other people, so like when somebody get to the top, other people be like, “Man, I’m not worried about him. I’m gonna do my own thing and make it there too.” So I feel that’s probably one of the main reasons why people don’t stick together. You know how down south, you go to Atlanta you got [Young] Jeezy, you got T.I., Gucci Mane, you got a bunch of different people? They all exist together. It’s just different in Philly.

DX: With you being part of Cash Money, there’s such a communal aspect with them down south. How are you affected joining them from Philly?
Freeway: I feel as though no matter where I’m at, I’m gonna do my thing regardless. I’m gonna make the type of music that I make, which might be a little different from what they make, but it’s still along the same lines. And I’m bringing some hot emcees to the table too with me, so I feel like we’re gonna have a strong movement no matter where we at. I feel like we’re gonna make a strong impact on the Hip Hop game.

DX: Even though Streetz Is Mine isn’t official, the tracks on there showed some strong lyrical growth on your part. Was that a conscious decision to take your lyrics to the next level?
Freeway: Things just get better with time. As I work I feel as though my lyrics get better. Plus I’m around a lot of steel and steel sharpens steel. I’m in a good space right now. I’m comfortable, I don’t have to worry a lot about pressures. I just go in and do my thing.

DX: Our DX Editor-In-Chief wanted to know…did Just Blaze ever “chirp back” after “It’s Over”?
Freeway: [Laughs] I just did [“Move Back”] with Just and [Sha] Stimuli, which is a good thing. Hopefully, in the future Just and I get to work together. He’s a real good producer.

DX: …and the inevitable question…
Freeway: How are things with me and Jay…

DX: Sure and the whole rest of the Roc…
Freeway: Me and Jay are good. Me and [Beanie Sigel], that’s like my brother. We’ll be together if we’re doing music or not, so that’s my brother. I have a real good relationship with everybody in State Property, [Memphis] Bleek, Jay. Everything is good, you know?

DX: If Free wasn’t here right now, where would he be?
Freeway: Wow, I don’t know. There’s a lot of possibilities. Things change with life. What I was doing before music was not too good. I’m older and I’m more mature, so I would’ve probably strayed away from that anyway. I grew as a man, so who knows. God blessed me to be able to still do this and make money to feed my family.