Legendary lyricist Pharoahe Monch spoke to HipHopDX late Friday (March 26th) and revealed that he and onetime partner-in-rhyme Prince Po will soon be treating long-starving Organized Konfusion fans to new music and performances from the celebrated duo that has technically been on a decade-plus hiatus.

“We recorded a [new] joint together,” Pharoahe revealed to DX of he and Po’s recent in-studio reunion. “We’re looking at recording some more records together. [But] in terms of us doing an album together, we really haven’t even began to process the approach to doing that.” 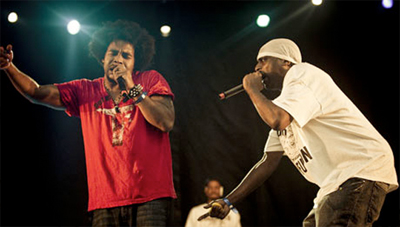 While the long-awaited fourth full-length from Organized Konfusion now appears unlikely to surface anytime soon, longtime fans of the creative-boundary pushers can catch some nostalgic flashbacks to the group’s glory days as Po and Pharoahe continue their recent string of performances together from last year into this summer.

“We did some reunion shows last year, one at B.B. King’s [on 9/25/09] that was insane, man – big up to everybody who came out,” noted Pharoahe. “The place was packed. We did one at [the All Points West] festival in [New] Jersey [on 3/30/09] where Jay-Z head-lined… And then we been booked this summer to do some gigs overseas. So, I think naturally that the work [on new Organized Konfusion music] will get done. But, the effort, and time…and all of that – The whole long-player thing it would really, really, really have to make sense for him and for me [to put a whole album together at this point].”

The aforementioned new O.K. song – the duo’s first recording together since their “Then And Now” union in 2008 – https://hiphopdx.com/news/id.7677/title.organized-konfusion-reunites-for-track-releases-best-of will be making its way out to the people shortly.

“We should be leaking it [soon],” Pharoahe revealed of the track that he slyly dodged a request to divulge the title of. “I just wanted to find a way to get it to the people in a unique way, rather than just dumping it on the Internet.”

Pharoahe has apparently chosen to go ahead and leak the song in lieu of placing it on his upcoming new solo album, W.A.R. (We Are Renegades), as he explained to DX, “I wish I could [put it on there], it’s hot, but it doesn’t fit on the record.”

It has been nearly 13 years since the September 1997 release of Organized Konfusion’s last full-length, The Equinox: the ambitious concept-driven, (but critically panned and commercially ignored), follow-up to O.K.’s classic 1994 effort Stress: The Extinction Agenda. And while Po made an appearance on Pharoahe’s 1999 solo debut, Internal Affairs – a project that Pharoahe only undertook after Po decided to take a break from recording and touring following Equinox – the duo have yet to officially resume recording together as Organized Konfusion (Pharoahe did not appear on either of Po’s two solo albums, 2004’s The Slickness and 2006’s Prettyblack, and Po failed to surface on Pharoahe’s sophomore solo effort, 2007’s Desire).

Roughly six years ago an attempted O.K. recording reunion was reportedly abandoned after Po rebuked plans to reform the group as a trio with the inclusion of Pharoahe’s childhood friend, (and guest star on O.K.’s second single, “Fudge Pudge,” from their self-titled 1991 debut album), O.C., into the official group lineup. When asked what exactly happened to that initial failed attempt at bringing Organized back together to record new group music prior to last year Pharoahe once again slyly dodged the question and replied, “I don’t remember. [Laughs]” 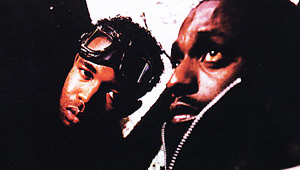 pairing for last year’s compilation effort from DJ JS-1, Ground Original 2, additional recordings from the tag team of Pharoahe and O.C. are being planned. “That’s in the works too,” Pharoahe revealed of more to come from the twosome. “Just songs [together instead of a full project], ‘cause at this point of maturity when your creative juices get going it’s so distinct and pinpoint – you rarely find cats just rhyming for the sake of riddling… [And] it’s hard to do collabos, [especially] an album of collabos of just that.”

Stay tuned to HipHopDX for our forthcoming feature interview with Pharoahe Monch to learn how Nas personally made an effort to explain to Monch that he didn’t bite Organized Konfusion for one of his Premo-produced conceptual gems, how Pharoahe was shocked to learn of Notorious B.I.G.’s appreciation of his skills on the mic, why the former SRC/Universal Records artist has left the major-label game for good, and to get some exclusive details on Pharoahe’s forthcoming new solo effort, (his first release in conjunction with Duck Down Records), W.A.R. (We Are Renegades).