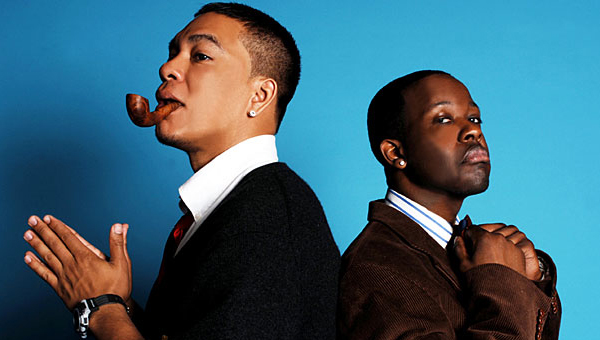 Three days before the critically-acclaimed duo Kidz In The Hall embarked on their Crowd Control Tour, one-half of the Kidz, producer Double-O, spoke with HipHopDX to provide some pre-album-release insight into the motivation behind the sonic shift K.I.T.H made for their third full-length, Land Of Make Believe (due in stores and online tomorrow, March 9th).

The New Jersey native further provided an in-depth look at how the Kidz sonic growth has taken place over the course of their three albums. And the slept-on beatmaker also addressed accusations of biting other artist’s sounds, and why he and his Chicago-bred groupmate Naledge are not “interchangeable” with artistic peers The Cool Kids, Kid Cudi and Wale.

HipHopDX: I’m personally loving tracks like “Take Over The World”

and “Rise And Shine,” but you know there are gonna be haters sniping on that bigger, broader sound of the new album. So why that synth-heavier vibe on a lot of the tracks?
Double-O: I started off producing as not a sample-based producer… I got into sampling later on, and then incorporated that into the synth-ier stuff that I did. And you heard a lot of that on the second album, [The In Crowd]… There were records like “Love Hangover,” “Driving Down The Block”

, “The In Crowd”… The last album was pretty much like half-and-half, like even the “Black Out,” there were no samples in that record. So, all I did was take that but took a more emotional standpoint with the records that I made this time around because we wanted to be a little bit more personal. We wanted to have a record that people could say, “Okay, this is the Kidz In The Hall sound.” Rather than [somebody saying], “Oh yeah, they sound like…” whatever else is going on with everybody else. It’s like, no, this is what it is. Like, you might group us with a lot of these other younger cats and that’s fine, but we’re not interchangeable.

DX: Yeah that was sorta my next question, I think you just answered it. ‘Cause as you know, you got accused of bitin’ The Cool Kids with “Driving Down The Block,” so I gotta ask how much someone like a Kid Cudi-influenced the new sound, if at all?
Double-O: None of them ever really influenced us. People forget we were out before all of ‘em. And, a lot of these ideas – No idea is new. Unfortunately it’s one of those things, it’s like whoever gets to the public first is the winner.

DX: Or [ends up having] the biggest impact, yeah.
Double-O: But, “Driving Down The Block” had a bigger impact than any – not to be disrespectful to [them], but it’s bigger than any Cool Kids record ever. And, the reality was that there were a few similar records at the same time: “Fat Boys” from Pac Division, “Black Mags” obviously from The Cool Kids. And The Cool Kids actually, a lot of their sound comes from the same place that mine does, at least with “Driving Down The Block,” which was… Back in ’06, myself, another producer by the name of Xcel, DJ Mano – both of those dudes [are] out of Chicago, but I was in Chicago a lot for ’06 – we were all experimenting at the time with basically flipping what Houston had done with Chopped & Screwed… And so, Xcel, and myself, and Mano, we were looking at it back in ’06 like, “Yo, let’s do it, but from a Hip Hop standpoint…let’s do it from the dope Hip Hop shit we grew up on.” So, we were all connected by this guy by the name of John Monopoly. And the first record in that bunch came from Xcel when he produced “Gettin’ Some Head” for Shawnna. And it was the idea that yo, let’s take this old dope Hip Hop shit with Too Short and flip it in the Chopped & Screwed realm. So, that was the first [incarnation] of it. Then “Chi State Of Mind” was something that Mano had done with GLC. And there was a record that [Naledge and I] had that never came out called “Fresh Dressed” where I flipped Slick Rick. So these were all ideas from ’06. And so what happens then is that I tucked it away because at that time we wanted to make sure our first foray into let’s say the commercial Hip Hop world with School Was My Hustle was a little bit more…I guess…A Tribe Called Quest, Leaders Of The New School, Native Tongues inspired because that was what we felt was missing at that time. The summer of ’06 is like the summer of “Laffy Taffy,” and for a lot of people they were very disenchanted musically with what was going on… And so the ideas for what would eventually become “Driving Down The Block,” which was “Fresh Dressed” – there’s a record, “Snob Hop,” that ended up on our album The In Crowd – and a few other ideas basically were just put on the back burner [at the time]… Then we get into the next year, which was ’07, and…we were gonna make a EP. And then the EP was supposed to be called Class Participation. So it was like, “Yo, let’s do a bunch of these records with our friends and…we have a feature on every song, and let’s do six records.” So, I kinda dusted off the idea of “Fresh Dressed” [for “Driving Down The Block”]… It was an idea that was already a year in the making. It was an idea that actually came out before The Cool Kids ever even existed… So, people talk about biting, but I was just like, “Man! Everybody was on that shit a long time ago.” But like I said, it’s whoever does it first, and whoever popularizes it first.

DX: So you broke down the evolution of how that sound came into the second album, [but] what was the shift towards this sound for the new album? ‘Cause like I said, whether or not [you agree with the comparisons] people are gonna say that’s some Kid Cudi shit.
Double-O: Well, I mean, I don’t think they can. I think that Kid Cudi shit, the way people know it, is “Day ‘N’ Nite.” And then if it’s not “Day ‘N’ Nite” it’s “Pokerface.” …For fans that really know [us], and there are a few that have already picked it up – But there’s a record on our last album called “Inner Me.” And “Inner Me” is kinda the realization at the end of the whole album that yo, the in crowd, it’s fun and dope to be in it, and it’s cool to try to be a part of it and be cool and all of this shit, but on the inside all of that takes a toll on you, and this is what’s going on. And so the “Inner Me” was really the flipside personally of what the in crowd had become, and that song begins the conversation for this album… If you were to play the last couple records of the last album – and so you hear “The In Crowd,” and there’s “Pledge”

DX: My personal favorite album of y’alls is still the first joint – I don’t know if that’s surprising or not. “Hypocrite,” “Go Ill”…
Double-O: No, not at all. I mean, I think that there’s an innocence that we had on that album, [laughing], and I guess a little bit of ignorance as to what the world would become after that…

DX: Those drums on “Day By Day,” like that shit is like crazy. I just, I dunno, me personally I woulda liked to hear a little bit more of that mixed into the [new sound].
Double-O: But I feel like… I made sure that drums were a focus on this album because I definitely didn’t like the way the mix turned out on The In Crowd… I think if you listen to this record in a car system, or if you listen to this record even in some [Beats By] Dre headphones, you’ll hear the harkening back to a lot of let’s say like “Move On Up” or “Day By Day,” those types of harder drum chops. That’s what makes “Traffic”

that’s what makes “Out To Lunch”

that’s even what makes songs like “Rise And Shine.” I may have played with it a different way, but that’s a drum break that I’m flipping and kinda taking in a little more Pop realm. But they still hit like drum breaks…

DX: So we talked about that more rugged boom-bap of the first album, [but] the more soulful stuff of the second album – “Paper Trail”

, “Let Your Hair Down,” “Mr. Alladatshit” – you think you gonna swing back to that [sound] at some point or…?
Double-O: Uh, I don’t – I think my goal is to find a way to really evolve this synth-soul idea, which is the open conversation on this album, which is like, why can’t we make the music that we sample anymore without just trying to replicate that music? It’s an interesting issue that we have musically now. Unless you’re doing what Mark Ronson is doing, or groups like Chin Chin, or the Dap Tones, where you’re like making classic Soul music…[then] all of a sudden there’s not necessarily any real Soul out there anymore. There’s nothing that’s really pushing any emotion out of any of the music that feels…that’s new. And to me, even though people may talk shit about it, 808s & Heartbreak is the only album that did that… He had samples on it, but the shit that he pulled from to make a lot of that album is…it’s still very not typically soulful, and I feel like he made it emotional and made it soulful in that way. So, this [new Kidz In The Hall] album for me, a lot of the ideas were started before even 808s came out, which is funny to me, because I really feel like people are stealing all of the shit that I come up with before it ever comes out, [Laughs]… A lot of what became this album were records that I was gonna do for my solo project. The “Intro,” “Running,” these were records that were directly coming from me trying to do this song-based album rather than it being an Electronic or an Electro-Pop album. So a lot of those things come from that… And a lot of those records it’s all – Like there are real horns in “Traffic.” There are real horns in “Take Over The World,” along with synthetic horns. I like that juxtaposition. Because that’s the only way that you can sell it to a new era of people. What I don’t wanna do is ever make something like be a tribute group. ‘Cause then you might as well be a cover band. Like, “Yeah they make that Tribe Called Quest that sounds exactly like Tribe Called Quest shit.” It’s like no, take the feeling, take where they started and evolve it to 2010. Take what Outkast is doing and evolve it for 2010. The feelings behind that music, that made that music, we still have now, but we have to do it with our tools and our innovations. And so that’s really what a lot of this thing became.

Purchase Music by Kidz In The Hall