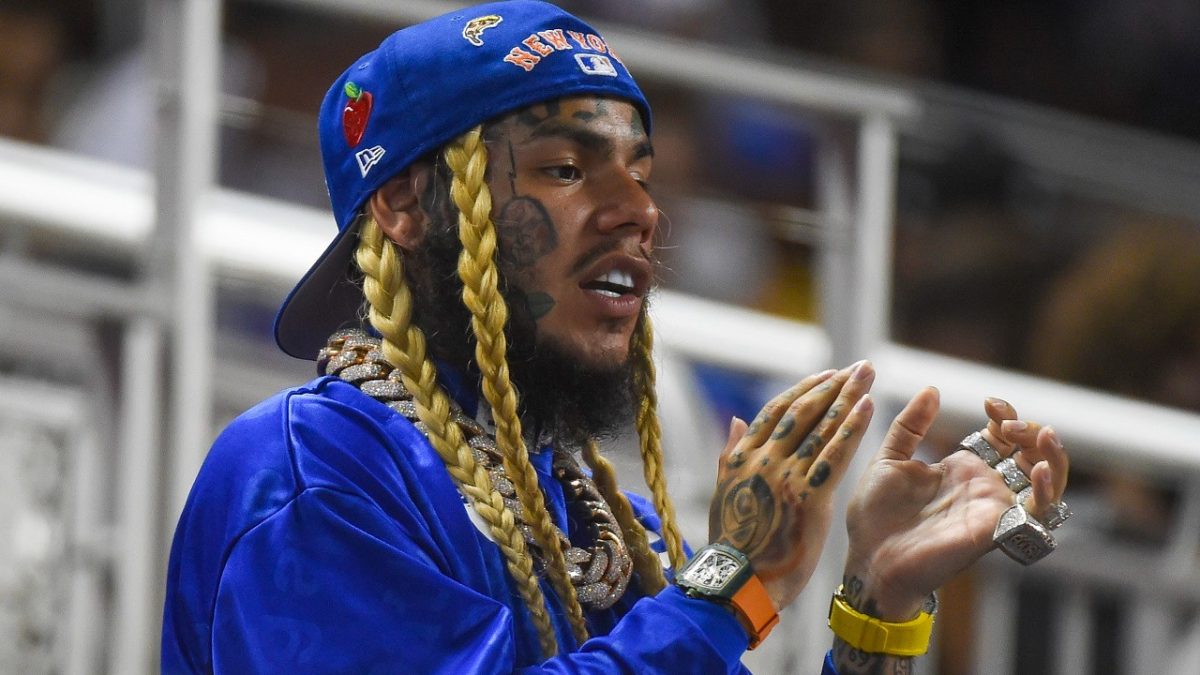 6ix9ine has reportedly asked his new girlfriend to marry him during a night out in Dubai, where the controversial rapper has been spending a lot of time lately.

A photo has surfaced on Instagram that sees 6ix9ine on one knee holding a blond woman’s hand. In the photo, the couple are standing in front of a heart-shaped backdrop made of roses, with the words “Will you marry me?” written in lights inside the heart.

It’s not been confirmed whether the proposal is real or part of a music video shoot or some other stunt. HipHopDX has reached out to reps for 6ix9ine to find out more information.

6ix9ine’s new fiancée appears to be a different woman than his most recent known girlfriend, Rachel Wattley, who goes by Jade on social media. In August, she was arrested on a domestic violence charge after allegedly punching Tekashi at a Miami nightclub.

In footage posted online, Wattley and a group of women are seen arguing with 6ix9ine in the street when one of the women tries to swing on him. 6ix9ine heads to an awaiting vehicle and sits tight until law enforcement arrives on the scene to determine what is going on.

The police report notes officers saw the couple emerge from the club in a verbal argument. When asked what happened, 6ix9ine apparently told them Wattley assaulted him.

Officers observed marks on his face and asked witnesses what happened. They learned Wattley had indeed hit 6ix9ine and attempted to grab his chain. However, he refused to cooperate and didn’t want to press charges against his girlfriend of four years.

Two months later, Wattley’s attorney Steven Bell told TMZ that the case against his client had been completely dismissed, due in part to 6ix9ine’s refusal to cooperate.

The “GOOBA” rapper was recently linked to Pop Smoke’s ex-girlfriend Alyssa Danielle, after rumors emerged that he had 6ix9ine had paid to have the woman flown out to an unknown location.

6ix9ine and Danielle sparked speculations about the nature of their relationship after footage surfaced online showing them sitting in two separate Lamborghini Urus SUV’s with identical interiors. It’s possible that the two may have the same model car; however, that didn’t stop social media from conjuring up an alleged story from the picture.

6ix9ine broke his silence on October 25, responding to the rumors with a post to his Instagram Stories that read: “@igmodeltearoom I never touched neither one of them girls.”

Danielle caught wind of the chatter along with 6ix9ine’s claim and backed it up with a post of her own disproving the rumor. According to Danielle, she’s too busy traveling to mess with 6ix9ine. “I travel 89 times a year,” she wrote. “Don’t mix me in no bullshxt cause i’m in the same place as mf’s!!!!!!!!!!”