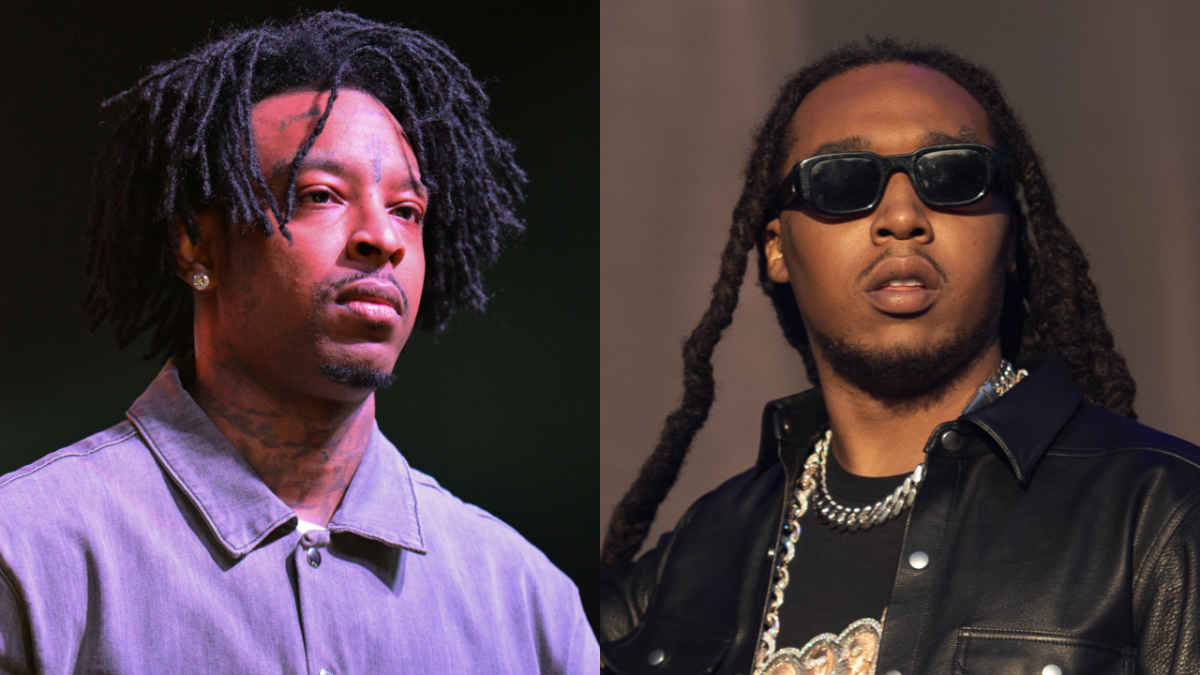 21 Savage has explained why he and Drake decided not to delay their joint album Her Loss, which arrived just days after Takeoff’s tragic death.

In a recent interview with Akademiks for his Off the Record podcast, the Atlanta rapper revealed he and Drizzy initially contemplated pushing the project back out of respect to the late Migos lyricist.

However, the duo ultimately decided they’d rather help fans alleviate their grief with “something to look forward to,” rather than sitting back and letting the collective sadness fester.

“It was just so much going on, like so much negative, sad energy. We was just like, ‘Maybe this will give muthafuckas a smile or a lift-up, give the world a lift-up, something to look forward to type shit,'” 21 said.

“‘Cause at first we was saying we was gonna push it back, but it was like, ‘Well, shit. What’s that gonna do? Just keep muthafuckas in this mind-state for a little longer?’ Versus trying to move forward type shit.”

21 Savage went on to describe Takeoff’s death as “the worst one that I’ve seen in my life,” due to the rapper being a calm and quiet character who “didn’t deserve” to be killed.

“Never gonna see him argue. If he fighting, he fighting to help his brothers. This the worst one that I’ve seen in my life where it’s like, a n-gga who really didn’t deserve that shit.”

Takeoff (real name Kirshnik Khari Ball) was shot and killed outside a bowling alley in Houston, Texas in the early hours of November 1. An argument reportedly broke out during a dice game, leading to multiple shots being fired.

The 28-year-old was struck in the head and the torso, according to the autopsy report, and was pronounced dead at the scene. Quavo was with Takeoff at the time of the shooting, but was unharmed.

No arrests have been made, although Houston police have urged witnesses to “step up” and help them identify the gunman to “find justice” for Takeoff’s family. At least 40 people attended the private party at the bowling alley.

A memorial service for Takeoff is set to be held at the 20,000-seater State Farm Arena in Atlanta on Friday (November 11), with Justin Bieber reportedly among those set to perform.

Her Loss, meanwhile, was released on November 4 and featured appearances from Travis Scott, Birdman and Lil Yachty. It followed previous Drake and 21 Savage collaborations such as “Sneakin,'” “Knife Talk” and “Jimmy Cooks.”

Prior to its release, Drake paid tribute to Takeoff on his SiriusXM radio show, Table For One, while extending his condolences to the rapper’s close friends and loved ones.

“I’d just like to send our deepest condolences from the family to the entire QC, to our brother Quavo, to our brother Offset, to the friends and loved ones of the legendary, unprecedented TakeOff — a guy that I knew for a long, long time,” he said.

“I’m sure people know how we started, of course, with ‘Versace.’ And from there, you know, we formed a brotherhood. I always talk about the fact that this was one family. My friends in the music industry are not friends, they’re family. Tragic loss for all of us and, you know, a dark cloud over this business that we love so much.”