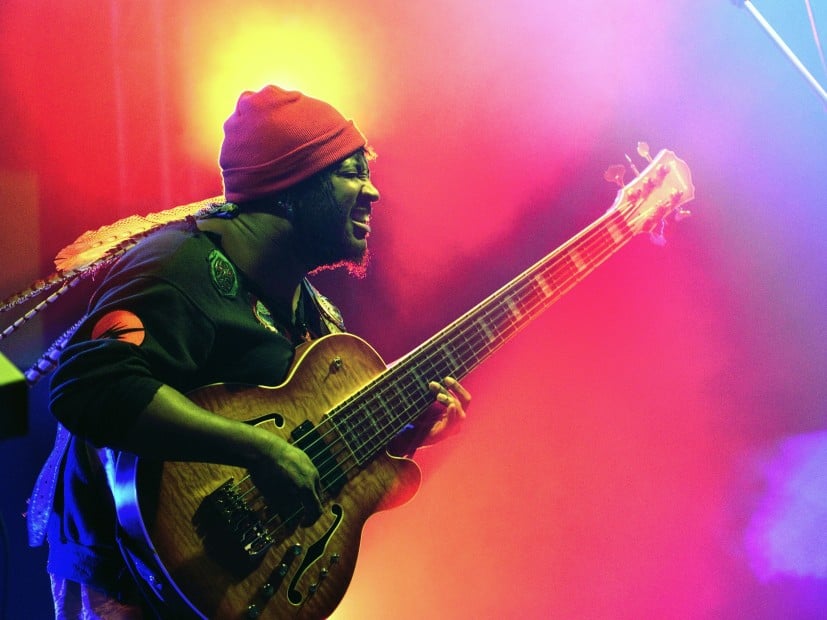 Here's Why Thundercat Is Cooler Than You

At only 33-years-old, Thundercat (real name Stephen Bruner) has a musical career most people only dream of. The prodigious bass player, who grew up in Los Angeles, joined his older brother’s thrash metal band Suicidal Tendencies in 1999 and since then, has established himself as one of the most in-demand studio musicians in the biz.

From Kendrick Lamar and Erykah Badu to Flying Lotus and N.E.R.D, his fingerprints are all over the place.

After pumping out three solo albums, including his latest Drunk, he’s at a creative peak and shows no signs of coming down. So, here’s why Thundercat rules.

Back in 2015, Thundercat contributed his jazz-infused bass to K. Dot’s masterpiece, To Pimp A Butterfly. The two artists have a symbiotic relationship Thundercat continues to nurture almost every day. It all started right after Good Kid M.A.A.D. City was released in 2012.

‘[Our relationship] started a few years ago,” Thundercat tells HipHopDX. “It started by way of me working with one of his main producers Sounwave. Me and Sounwave started to dig for a sound. It originally would start with him calling me to play bass, which I think is how it starts with most people.

“It went from that to the moment where we’d look up and we’re just going full steam ahead with creating tracks and bouncing ideas off of the wall and the whole gamut of sound,” he continues. “The road was really intense to creating To Pimp a Butterfly, of course. It took a lot of emotional and mental strength out of everybody involved with it I think. The funny moments, I always talk about one where everybody remembers when ‘King Kunta’ came out but, I remember when it was created on my apartment couch. Me and Sounwave sittin’ there watching cartoons talking about Marvel cards. That really happened. I’m proud of the dude.”

He & Kendrick Try To Keep Each Other Inspired

Often heralded as the “creative epicenter” for TPAB, Thundercat was instrumental in its creation. Their working relationship has evolved into a friendship based on mutual respect.

“I try my hardest to keep Kendrick inspired whenever I can to any degree,” he says. “I spent a lot more of this last year touring, so it’s like one of those things where it’s a little different. Once I get back into full on studio mode, I definitely will always think of him, keep him in mind.

“Because I know how difficult it is,” he adds. “I mean, I don’t understand the shoes that he walks in but I definitely get a good feel for how difficult things can be for him because it’s gotta be pretty difficult being that amazing. I tend to believe that it’s important for us to try to keep each other inspired, so I try. I definitely try with Kendrick to keep him inspired.”

“It was fun,” Thundercat says. “Pharrell is and always has been like a beautiful light in the music. He brings excitement to the music like he always has. I’m just happy that he’s still out here doing his thing with Chad [Hugo]. It’s one of those things that … It’s kind of funny because we made a bit of a trade. If he’d appear on my album [Drunk] for me, I’d play bass on his album.”

He continues, “It was crazy when it happened, too. I was in the middle of finishing up my album and he calls me to play bass on it, so I show up to the studio and I remember, I was like if I was ever gonna shoot my shot, this is the moment. I said to him, ‘Hey I’d really would love to get a chance to write with you. At first he felt kinda weird about it, but then he opened up a bit. We got a chance to work together in a couple different capacities and now that all the music is out everybody’s hearing the N.E.R.D album and then hearing my album, and it’s kind of like it came into fruition.”

He Talks To Erykah Badu Every Day

“That’s my family right there,” he says. “That’s where I come from. That’s my home. We talk every day. She’s fantastic. She’s good.”

He Makes Music With Rock Royalty

“I was very, very excited about that,” he says, speaking on the collaboration. “I didn’t think that would even be a possibility in the course of working with those two. I’ve been a fan of Kenny Loggins for ages. I feel like these guys are some of the pillars of American song writing, you know? Everybody can take a page out of Michael McDonald and Kenny Loggins’ books.

“It’s something about the way Kenny would write things that would speak to me, and his honesty and the music,” he adds. “And the same with Michael McDonald. There’s a bit of honesty in their son writing and I felt like it was a consistent thread with what I would be seeing from an Erykah and from a Flying Lotus — like this common thread of honesty in the music. It’s difficult. It’s not a very easy thing to do. Just because, it’s not always that the truth hurts but, even your truth may not be somebody else’s truth. But with Kenny and Michael, I felt like I could relate and understand a lot.”

He concluded, “I genuinely felt like they had a grand understanding of the stuff. Michael having sang on many a hit records and created hit records, and Kenny Loggins just kind of throughout the decades has hits from like the ’70s until now.”

“My performance at Coachella was actually a question on Jeopardy!” he says, proudly. “They literally had a question. I’m sitting at home chillin’ and it was just like a little reminder of hey man, keep going. The guy got the answer right ’cause the answer was, ‘Who is Michael McDonald?’ The question was, ‘During Thundercat’s 2017 performance at Coachella, who was this Doobie Brother that he brought out?’ It’s pretty cool. That was a great way to kick the year off.”

Dude. I was a jeopardy question today. Hell yeah

“Frank Zappa is one my biggest idols,” he says. “I feel like the combination of Frank Zappa and George Duke, and Mothers Of Invention. I feel like my songwriting just stems from different places. It doesn’t really have a rhyme or reason but you just have to see it through I think, which is the key. And a lot of times you may get tired, it comes naturally to put things in this loop form because of Hip Hop but, there’s a part where you have to just push through these moments that are comfort zones and just try to get to that other part that’s really weird, you know?”

He Welcomes The Weirdness Of Jaden Smith