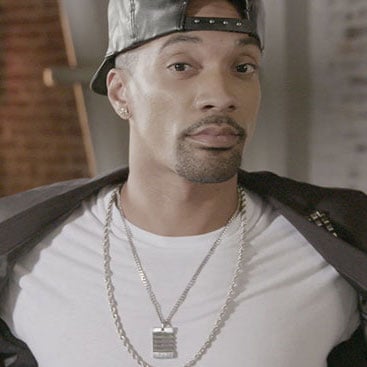 Anyone who watched the past few episodes of VH1’s Love & Hip Hop Hollywood understands how painful it was watching Miles come out as an open homosexual to his on-and-off girlfriend Amber and family members. Then again, it was necessary. Miles’ relationship with cast member Milan intensified the pressure to come out. A first in network television history, a black male gay couple were given a narrative. There were even rumors circulating that heterosexual male cast members didn’t even want to shoot scenes with them. Of course, those were shot down as VH1 broadcasted their “Out In Hip Hop” special featuring guest commentary from Big Freedia, Buttahman, Ray J, DMC and more.

Miles understands many are looking at his life with more scrutiny. Considering his aspirations as a rapper, coming out in front of millions may have helped or hurt him. Regardless, he’s hoping to join the ranks of other LGBT artists with a huge following. Stopping through the DX office, Miles talks Love & Hip Hop, the end result of coming out,

DX: The past episodes this season have been pretty wild man. Really tough to watch. I guess for you, it’s been a long time coming. I can only imagine how hard it was to really put yourself out there like that on television. What ran through your mind as you came out to Amber not only in front of her but the world as well?

Miles: I guess for me, it’s just never a real right time to tell someone or anyone something like that. That’s why I would like to thank the show because it really helped me figure out a way to tell her. I really didn’t know how. This is never good news whether five or ten years ago. For me, it’s: How do you tell someone something like this? How do you turn bad news like this into something better the best way you can. Even a little bit afterwards, I kind of regretted doing it. I got through it and I’m sitting in front of you today.

DX: Obviously, everything was shot months prior to its broadcast. How does that work in terms of your storyline on the show?

Miles: Well, there’s a common misconception that I was in the closet, I was on the DL or all this stuff because that’s not what it was. I was in a relationship with Milan and he’s tight with Hazel. The opportunity to be on the show came. Of course, I was hesitant and had reservations about it. I was nervous and didn’t know if I wanted to do it. For me, I know there are a lot of people out there who are going through the same thing I’m going through. If I could help everybody else and be a pioneer, I will. I know my music is dope and hopefully everyone just judges me from my music than my music.

DX: When did you know that you were having those feelings towards males?

Miles: I feel like I always knew subconsciously. I told myself I was straight and just put those feelings to the back of my mind. I throw behind until the pot over boiled and here we are today. It’s about living your truth and not being afraid of who you are. Just keep it 100.

DX: How do you do that while maneuvering your way around life as a rapper?

Miles: I’m still figuring that out. I don’t know. All I can do is make the best music that I can and put that out there. I’m trying to balance the two, I’m still learning.

DX: Do you feel as if coming out has hurt your career so far?

Miles: Absolutely. It’s hurt me but also helped bring awareness. It’s raised a discussion about something seen as taboo. It’s a great way for LGBT artists to have a voice. For the Hip Hop community to even address this issue means we’re making a difference.

DX: Fairly interesting that it would take a show like Love & Hip Hop to address the issue considering how many within the community feel about the show.

Miles: Right. To have such a serious subject being tackled on Love & Hip is different. It got a lot of people talking. I’m happy that Mona Scott-Young was courageous and brave especially in Hip Hop and black culture. I thank her for having me and Milan tell our story on her show.

DX: You just dropped an EP and music video which has people talking.

Miles: Yeah I just released my EP and having a music video on YouTube. Right now, I’m still writing, recording and pushing new music out there. I’m shopping my stuff to different labels right now. Hopefully, they want to touch me but I don’t know. I’m just taking the journey with the whole thing.

DX: Any artists that you can draw your style from?

Miles: Yeah, LL Cool J, Pharrell and Busta Rhymes. I look up at all of them. Those are my three. All three are carefree and loving people. They all have humble spirits. They’re pioneers who have been in the game for years. Those are definitely my inspirations when it comes to the game.

DX: What’s your approach to making music considering who you are and the type of people who normally consumes Hip Hop?

Miles: I don’t consider myself a gay rapper. I’m not a gay rapper. I’m a rapper who so happens to be bi-sexual. I’m just bold enough to say who my bae is at the time. I’m not ashamed of it either. When I jump in the booth and write, I may not be telling my story. I get inspired by the beat. I’m an artist, writer and creator so when I put my headphones on to listen to a track, I just write. Whatever comes to my mind or imagination, I just create. I go to work and create. I love my job. I’m just not afraid to talk about it. Actors go to work every day and go home to lay down.

DX: There was a rumor that the straight male members of the cast didn’t want to work with you guys over the obvious. Was that true considering you guys’ storyline is very small cast wise?

Miles: It probably does look like that, but everyone is dealing with their own storylines and stuff. Obviously, you can see we had so much going on in our story. We did have time to film with them. But in regards to the rumors, I woke up one morning and saw it on TMZ. I’m cool with all the men. I don’t have a problem with any of the men on the cast. They all cool. Me and Ray J suppose to be doing a song. Me and Fizz too. We all good.

DX: Did being embraced by Ray J, Fizz or even Soulja Boy give you any confidence?

Miles: It really did. They were like it is what it is. They respected that I was 100 about it. It gave me hope. Maybe I didn’t have to be as scared as I was. I will say that I haven’t been reached out to besides the cast.

DX: How does someone like you feel about an artist like Young Thug who almost plays around with the notion of sex and gender.

Miles: Right, is he playing with it or whatever. I like Young Thug though because he doesn’t care. He doesn’t care if y’all saying it or not saying it. He’s playing with it. The fact that people are making a mockery and clowning him about it. He’s running with it. He’s fooling us. I like that. I commend him. That’s the biggest fear of a rapper is anyone calling them gay. The fact that he’s running with it and doesn’t give a fuck, my hats off to him. He’s still pushing.

DX: Are you planning on working with Milan?

Miles: Yeah, we’ve worked together. We’ve recorded songs that aren’t out. He’s a different type of rapper than I am. I’m like super West Coast and he’s more mid-west/south type. And, he’s more pop. We more so do this in the studio [put fist together]. I won’t even jump on certain tracks with him. He’ll be like this is dope and I’m all like I’m good. We’re totally two separate artists. We plan on doing something together because we know people want to see it.

DX: Have you seen a change in how people look at you now in relation to life before Love & Hip Hop.

Miles: Uh yes. You know what? I don’t know. It could be my own insecurities. I just feel that just because I came out, no-one wants to work with me. On the “Out In Hip Hop” special on VH1, you got Ray J, DMC and others showing love. It was refreshing. I haven’t seen it yet. There have been moments where I regretted it. Was this the best move for my career or everybody knows. I opened up my life to where I gave people a reason to have an opinion about me. I think that was my biggest reservation about that. Now my music is actually being judged. If you look at my video, you have comments asking why I’m talking about women. Is the track hot or not? Is the video hot or not? Why does that matter?

DX: That’s ironic considering where Hip Hop is at in terms of authenticity. You’re a rapper who is gay but talk about women and even have them in your video in a very heterosexual way.

Miles: Exactly and it’s not like I’ve never been with a woman. I’ve been with a woman for ten years. I know about women and know, I’m in a relationship with bae. It is what it is. At the end of the day, I’m an artist. I go to the studio, I create and find myself inspired. Sometimes I don’t talk about what I’m going through. My imagination is crazy. I just jump in there and I write. Now, my music is being judged because I opened this one tiny part of myself. Now, my music is totally crazy.

DX: That has to be another insecurity you have to deal with which is just being an artist. How do you deal with that as well as the other issues many may have with your sexuality?

Miles: Man, it’s overwhelming. At the end of the day, I’m on this show and this platform. Opinions are going to come. All I can do is stay true to myself and keep pushing out dope music. Just stay me and stay grounded.

DX: Has there been a surprising moment in terms of your music’s reception?

Miles: Probably a lot of female fans. There are females who have said in the comments, “I don’t care what he is. This record is dope. This slaps.”  Going through my YouTube comments…

DX: That has to be hard. YouTube comments can be brutal.

Miles: They’re raw. But, it is what it is. You know, I have tough skin. Seeing the comments, I’m loving it. I have more likes than dislikes. People are most definitely feeling my talent. But, you still have the haters and judgers.