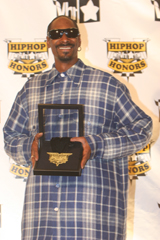 Vh1’s Hip Hop Honors isn’t exactly The Source Awards, The VIBE Awards – or The BET Awards. Point being, fistfights aren’t likely. Cutlery is strictly prohibited. This happened with loose cannons like T.I. and Busta Rhymes were in the building, while Suge Knight’s invitation – let alone honor, must’ve ‘got lost in the mail.’

That being said, what you won’t see on the television airing isn’t all that juicy, but it may be worth noting for those keeping score at home.

Don’t expect host Tracy Morgan to be getting a callback for next year. The SNL comedian struggled through several of his monologues. Stuttering, bobbled clichés and mismatched facts (claiming Dr. Dre had a hydraulic Cadillac, not Impala for instance) made Morgan appear that he was trying too hard, or just shook from the celebrities in the crowd. Whatever the case, after Morgan missed his cue after an early commercial break, taping stopped for over 15 minutes. Did the brass at VH1 get in the comedian’s ear like a coach scolding a sour quarterback? One can wonder, but when taping resumed, it was not with the host, but directly to Diddy presenting “New Jack Era” Teddy Riley and Andre Harrell with a strong narrative on the history of the movement.

“New Jack Era” was another debacle. If the crowd noise seems loud on the airing, it’s strong mixing in post-production. After an exciting and engaging tribute to Missy Elliott from Timbaland, Eve, Ciara, Nelly Furtado and others, a docile crowd yawned its way through R&B medley tributes to Guy, Wreckx-N-Effect, and later Blackstreet. Aaron Hall and Keith Sweat weren’t on hand, but Chauncey Black (as the street was) was Riley’s immortal hype-man. Maybe the crowd agreed with legions of others that although Teddy Riley produced for everybody from Spoonie Gee (early) to Benzino (late), that his accolades are R&B, not Hip Hop. Equally, Andre Harrell, who Diddy dared to cite as a rapper for his Jekyll & Hyde days in the ‘80s, might not be worthy for an award either. After all, this is the guy who Diddy surpassed-then-fired, and the guy who nearly ended Motown Records. Needless to say, Riley grew embarrassed at the questioning to the whereabouts of former bandmates who were not included in the tribute.

Kool Moe Dee claimed “Next year, baby” during his performance. Although the Treacherous Three-turned solo star deserves nods in many eyes, does he have the resonant hits to register with a TV audience? LL Cool J was in the house, and must have felt good with pockets padded with G-Unit money to run into his former nemesis, demanding recognition. Speaking of LL, his other former nemesis Ice-T was in the house, and even sporting a blue bandanna as part of his Snoop tribute. LL might be dressing like a gangster lately, but the Ice is one. Not since “Colors” have we seen Ice-T reppin’ the Crips on the mainstream level.

Speaking of excluded, Consequence lucked out that no cameras caught his mix-up with A Tribe Called Quest. Although the renowned trio has reunited with “what did he do?” fourth member Jarobi at Jam Master Jay’s funeral several years back, Consequence (who appeared as a group member only on 1996’s catalogue-coaster Beats Rhymes & Life), took to the awards podium with open-arms, only to see that four medallions – not five – were waiting. In a move synonymous to the “walk it out after tripping,” Cons dipped from the stage in a casual fashion. Luckily, no members of the press caught wind of Lupe Fiasco’s lyrical fumble during the televised performance – no questions were asked, neither was the question as to “How did Busta Rhymes gain 100 pounds?” Not since Akinyele has a rapper packed on the pounds like this.

The other tidbits… for those scanning for ankle bracelets above engagement rings, Eve’s ankles were free of alcohol monitoring – which if she went out with Missy Elliott (who refused all press questions to “go get drunk”), was trouble. KRS-One was dissed by event staff, who wouldn’t let the loquacious “The Teacha” field questions from the press, in order leave the stage for a bored Chris Rock. Also, though people are watching Salt-N-Pepa’s new reality TV show on Vh1, the duo looked as happy to be reunited as Van Halen back with David Lee Roth for all of 10 minutes in the 1996 MTV Awards, for the rock star heads who remember. If Salt cut off Pepa one more time in the press conference, no head of hair seemed safe. It’s okay, nothing that awkward laughter couldn’t cover up like a cheap suit.

With the exception of the rebellious LL Cool J and Ne-Yo, Def Jam Records was absent from the event (EPMD rolled through, if their contract is still tied up at Def Jam?). Was The Carter Administration looking for inauguration? Perhaps if fellow “class of ‘96” alum Missy Elliott got in, Jay-Z wasn’t feeling it – especially since he’s been on wax since ’89. Who cares, he’s forever “gettin’ it.”

As Hip Hop Honors segues from the ‘80s further into ‘90s, expect more teenage awkwardness. Though the night generated powerful performances and dedications to Snoop Dogg and Whodini, the crowds leaving the event spoke of the decrease in excitement from previous years. With or without Kool Moe Dee, how will this important legacy in mainstream awareness of pure Hip Hop grow in set it straight in ’08?