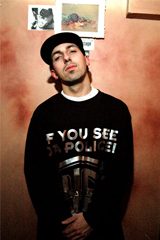 Making It As A New
Rap Artist Today

Anyone
looking to break into the business of rap or hip hop in this day and age has a
lot to contend with. First of all, the popularity of the format as well as the
abundance of artists already in existence has made it a very competitive field.
Then there are the rap artists that have gone beyond the music to produce, act,
write or create and launch their own brand of clothes, jewelry, etc. If those
aren’t enough obstacles there’s the fact that a majority of the major labels
out there expect you to be successful before you succeed.  Meaning the days of nurturing and supporting
an act from obscurity to fame are long gone. It breaks down like this:

+ You
have the fortune of having an “in.” And by “in” meaning you either have a
relative, a best friend or a posse member (A la Eminem and D12) who can
get you on the fast track to stardom.

+ As
a byproduct of the current reality show trend there is also a new generation of
celebrities (American Idol, Making the Band, The Real World, etc) who have been able to extend their fame past
the life of the show.

That’s
not to say that all hope is not lost. The rules may have changed slightly but by
no means does exclude you from playing the game. From a hip hop perspective
there are in fact things that makes this journey down the road to success
slightly different that other genres of music.

There
is one advantage in rap and hip hop that doesn’t apply to rock and pop — the
“live” element isn’t quite as important. Because so much of the music, style and personality of the artists take
precedence over a stage show, a lot of hip hop up and comers get signed without
much stage time at all. This doesn’t necessarily negate the stage skill but makes
it one less challenge that a newcomer has to struggle with as they would in
other genres. Although touring is a major source of income and in fact a great
way to get your music out there for independent artists, a lot of stars have been
made with mediocre live skills.

Another
major difference is that so many of these newcomers can take the DIY approach
to recording, so many artists with the right drive and initiative will have
already begun their own local and regional distribution self made CDs before an
A&R scout  even enters the fold. The
ability to make relatively high quality music using little more than a computer
has only increased this.

Lastly,
in the rap and hip hop world the artists have this trait known as the first
week phenomenon. Particularly from a regional standpoint. A CD or single could
get airplay, and take off in just one week then continue to remain popular. When
someone like, for instance, Nelly,
was up and coming he may not have had national recognition but he did have a
strong presence in the southeast (New Orleans, Atlanta, etc). And if you have a
regional artists with a “hot new sound or single” soon others begin to pay
attention. There are even several cities that proudly boast their own sound
thanks to the popularity of artists from the area.

It’s all about the
dedication

Everyone
wishes they had a Dr. Dre, 50 Cent
or Diddy in their pocket who could
not only get them in the studio but use their enormous fame and power in the
industry to put them on. The challenge
for everyone else is to get their discs made and out to the streets, clubs, and
DJs who’ll get them the spins to get them the recognition.

Even
more so than that is the challenge of finding a sound that will connect with
the listeners while attempting to be original. At the least, attempting to put
a fresh spin on an old variation. Either way, committing to success, pursuing
more than just one avenue and staying true to your sound will not guarantee
success but will at least put on the right path.