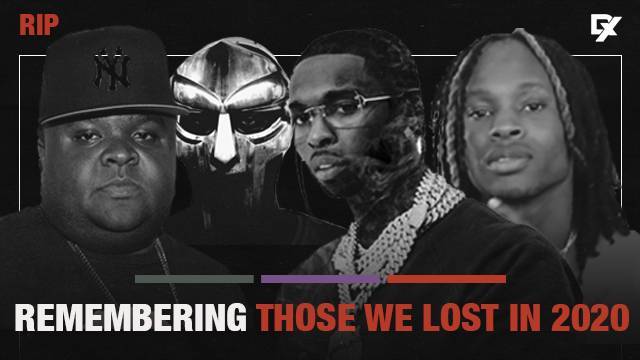 Remembering Those We Lost In 2020

No matter how wide Hip Hop continues to spread culturally and regionally, it will always be a tight knit community based upon shared passions. So even for fans, losing a member of the Hip Hop family is sometimes an inconsolable tragedy—and that doesn’t account for the families, friends and entire communities devastated by loss.

2020 has already been coined “The Year To Forget.” The world continues to be ravaged by COVID-19 and police across the country have proven to be unable to reckon with the overwhelming evidence of institutional racism despite a national outcry. Drugs and random acts of violence have decimated the lives of millions, both within Hip Hop and outside of it. But we shouldn’t forget 2020—we should embrace it and learn from it. Most importantly, we should vigorously remember those taken from us. We should remember them, celebrate them and try to parse any wisdom we can to prevent history from repeating itself.

In a dastardly move, only possible from one of Hip Hop’s greatest super villains, the masked marauder MF DOOM departed from this earth on Halloween. But the world only became aware of his loss two months later. Not even an encyclopedic-length essay could ever do justice for DOOM, a mysterious figure whom transcended Hip Hop. DOOM’s pen was a weapon with nuclear capabilities and his rhyme patterns, a direct gift from God. His beats hit harder than earthquakes. There are few artists who single-handedly changed rap — and DOOM is one of them. But he lives on through his deep, uncut discography, and more importantly, through the generations of rappers and producers he inspired. Just remember: “ALL CAPS WHEN YOU SPELL THE MAN NAME.”

Before the young King of Brooklyn was murdered in a Los Angeles home invasion at the start of 2020, he was preparing a bold ascent of rap’s hierarchy. His deep, booming voice masked the Canarsie-rapper’s young age. Pop was just 20 years old at the time of his murder but had accomplished more than most artists can ever claim. His monumental presence helped bring New York back to relevance after years of neglect and his loss is still felt in the five boroughs and beyond. The year ended with him topping SoundCloud plays for all artists.

Fred The Godson was a lyrical champion of The Bronx. When he wasn’t spinning records for New York radio station Hot 97, he was dropping dimes on mixtapes, studio albums and freestyles alike. A master of the pen, Fred understood what makes for good lyricism more than most of his peers. A contagious voice and punchy bars propelled Fred to dominance in the mixtape era and beyond. After succumbing to COVID-19 in April, he leaves behind a prolific collection of albums, which feature Pusha T, Jadakiss, Benny the Butcher and 38 Spesh.

Without Malik B., there wouldn’t be a Legendary Roots Crew who were instrumental in building the popularity of contemporary R&B. The Philly-born MC was an original founding member of the iconic group and helped usher in a new generation of jazz-heavy R&B. Malik departed The Roots after a four-album run, which included Do You Want More?!!!??!, Illadelph Halflife and the classic Things Fall Apart, before returning to work in 2006 on Game Theory. Malik passed this year from an undisclosed cause.

Chicago’s King Von was a slender man with a big bite. Armed with a powerful and rare gift to encapsulate his listeners with street life tales, Von grew to prominence by weaving his personal narratives with stories of broader cultural relevance. Von was killed outside of an Atlanta hookah bar on November 6, 2020 following an escalated altercation with Quando Rondo’s crew. Von’s murder took place only a week after the release of his debut studio album, Welcome to O’Block, a masterful project, which HipHopDX described as “a relentless and engaging showcase of superior talent.”

Famed South Side Chicago rapper FBG Duck was killed in broad daylight in front of an upscale shopping mall in early August. During the 26-year-old rhymer’s rap tenure, Duck made waves with 2018’s “Slide.” He rapped with a soft, confident swagger and casually issued drive-by’s as if he was placing an order at the drive-through. Though violence and gang culture permeated his music, there was also an undeniable acknowledgment of the dangerous state of Chicago rap as well as a desire to see it change.

Mo3 was only 28 years old but was on a mission to remind the rap universe of the immense potential of Dallas, Texas. He rapped with a fresh take on the leaning drawl of Texas rap — inserting R&B influences like a millennial version of Houston’s Big Shasta. The rap community in Texas was devastated to hear of his murder, which took place on a Dallas freeway. He left the world with over six album’s worth of material but had really just started to find himself as a rapper with Badazz MO3, his collaborative project with BadAzz Music Syndicate label head Boosie Badazz.

Chynna Rogers, the Philadelphia-born model and rapper, carried herself with a glowing presence that others sought out like moths to a lightbulb. The A$AP Mob affiliate created dark music with an ethereal ambiance. She rapped softly with a lilting, restrained sway about her feelings, reminding other tortured souls they aren’t alone in their struggle. Chynna had long struggled with substance abuse which ultimately resulted in a fatal accidental overdose in early April. Her first posthumous single “stupkid” was released on what would have been her 26th birthday and is a fitting celebration of a talent gone far too soon.

Mac P was killed in April by a since-apprehended suspect in Los Angeles’ Koreatown. It’s still shocking to consider what Mac P Dawg, a burgeoning rapper known for his affiliation with Shoreline Mafia, had managed to accomplish by the age of 24. Like his Shoreline Mafia peers, Mac P Dawg channeled the history and sounds of L.A. into his brazen, vibe-y raps. As his 2020 single made clear, Mac P was “Up Nxt” and he’ll be remembered for his incredible contributions to Shoreline Mafia and the potential he showed through his solo projects.

New York has JAY-Z. California has Kendrick Lamar. Arizona has Injury Reserve, the rap trio of Ritchie with a T, Parker Corey and the late Stepa J. Groggs. Groggs’ raps could be dark and reflect the turmoil he often faced in his personal life but could also be sharp, focused and even humorous, highlighting his ability to run even the worst into positive moments. The Tempe-born rapper died in July from an unknown cause. Like many who deal with substance abuse, he’ll partly be remembered for the struggles of his addiction but more importantly, for being honest about it.

Signed to Quality Control records, rapper Marlo came up with the most popular acts from the Altanta-based label such as Migos and Lil Baby. Though his potential never fully came to fruition, he was a beloved figure in Georgia and beyond as an artist and person. After being shot and killed in Atlanta in July 2020, tributes poured in from his close friend and collaborator Lil Baby, Bankroll Freddie and more. Marlo’s legacy will continue through the Quality Control movement and the music he left behind.

Iconic rapper Huey, born Lawrence Franks Jr., grew to prominence with his 2006 single “Pop, Lock & Drop It.” Huey was raised in St. Louis and engrained all of his raps with a midwest groove and touch of inspiration from music further south such as Atlanta and Memphis. Alongside a few mixtapes, Huey released two full-length studio albums, Notebook Paper and Redemption over the course of his career. The rapper was murdered in a St. Louis shooting at the age of 32. He will be remembered for his anthemic singles and for shining light on the underrepresented music of St. Louis.

In a brutal loss to the New York rap community, rising star KJ Balla was gunned down in Brooklyn last May. Following the successful melodic harmonies of rappers such as Lil TJay and A Boogie Wit Da Hoodie, KJ Balla was a young rapper with massive potential. A frequent collaborator of Jay Gwuapo, Balla’s life was cut short just as the young rapper was beginning to gain momentum through tracks such as “Back To Back.” KJ Balla’s first posthumous album Resurrection is now available on all streaming services, placing the spotlight on the burgeoning skills of a once promising young artist.

In the onslaught of violence which plagued New York rap, Nick Blixky — a rising talent from Brooklyn — was murdered days after announcing his debut mixtape Different Timin’, which was eventually released months after his death. He was a student of the Drill music wave, which has reinvigorated New York’s rap community. Alongside Pop Smoke, 22Gz and the Blixky Crew, he helped usher in a new, hard sound into the five boroughs. Though he was a legend in his city, “Drive the Boat,” “Jet Li, Pt. 2” and other tracks introduced him to a broader range of fans and hinted at his ascension in the rap game.

Due to a freak complication during a routine medical procedure, rap fans were forced to say goodbye to FXXXXY, a soft-spoken rapper/singer from Dallas. FXXXXY might be best known for “Need U,” his Gunna-assisted single from 2018, but the 25-year-old was also heavily involved behind the scenes with Future, working as an engineer and producer on projects such as SAVE ME and High Off Life. Do You Trust Me? FXXXXY’s first posthumous album is a collection of tracks that highlights the artist he was — a skilled rapper with an unprecedented knack for beautiful melodies.

One of the most promising rappers to arise from Canada in recent years, Toronto’s Houdini was left dead in a broad daylight shootout last May. Not only could the young artist rap, he could also sing and this signature blend of harmonic raps shot Houdini into stardom and netted him an exorbitant number of streams in the process. Though he was only 21 years old at the time of his death, Houdini displayed a prolific hustle that shook rooms during his brief career.