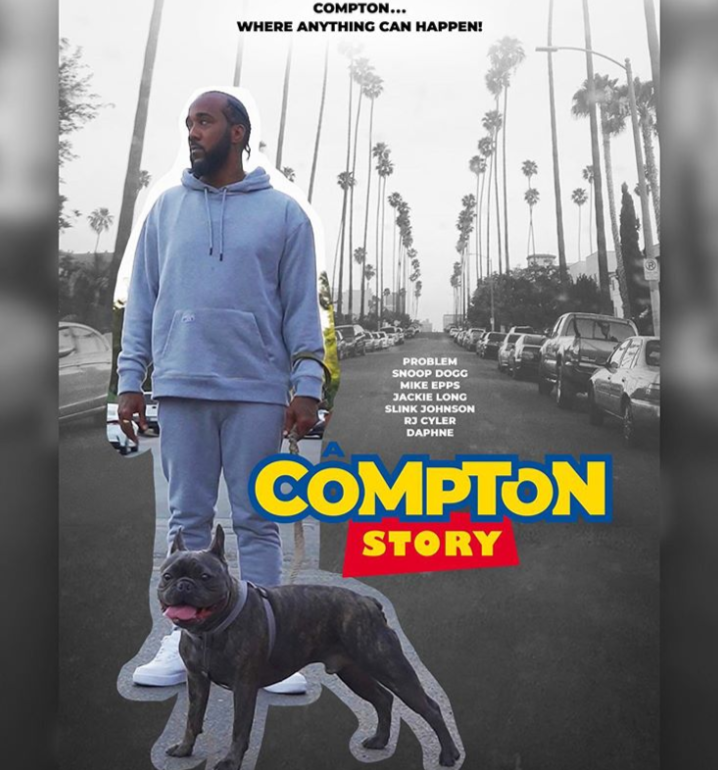 Review: Problem Shows That Home Is Where The Heart & Hatred Is In 'A Compton Story'

If there’s a thin line between love and hate, Compton rap stalwart Problem humbly walks it out to equilibrium while carefully looking over his shoulder in his debut film A Compton Story.

The middling 20-minute extended music video in the form of a tongue-in-cheek romantic comedy was co-written and produced by Problem and directed JoshyGonz, released on TIDAL earlier this month.

The film also has several new unreleased tracks such as “Lamborghini,” “Coffee and Kush Freestyle” and his latest single “Don’t Be Mad At Me” in its soundtrack.

There are several stoner and chitlin circuit type of humor and some occasionally incohesive moments in the screenplay.

The film’s tag line is “where anything can happen” and its chronicles the life and times of Jason “Problem” Martin accomplishing his goals without undermining that “at least one good deed goes unpunished.”

The “Whaaaat”-chanting lyricist navigates between his luxury lifestyle in the 818 with his live-in girlfriend Bae (played by Daphne) and unable escape the dangers of envy returning to his 354 origins.

“I wanted to do a comedy. I thought ‘some gangster movie’ would be expected from me,” Problem explained in an interview with Vibe. “I grew up loving stuff like Martin, Friday, Purple Rain…so those projects were my major inspirations and the blueprints to tell my own story, A Compton Story.”

The movie begins with a late point of attack and ominous West Coast Hip Hop style Moog keyboard whomps as Problem enters a Compton gas station as two other young shoppers look suspicious. He embodies that tag line by constantly looking over his shoulder to read their stoic expressions and actions, including one of them cueing to an inconspicuous gun under their belt line to their partner in crime.

In the film’s true opening scene, Problem rises out of his bed and the camera is fixated on the calligraphy-inscribed word “hated” on each side of his white socks before he changes them.

Problem’s produces his own tracks for four hours until midday and is “finally happy to find structure in my life” before embarking on a weed transaction with his friend Nick throughout the film.

Before deciding to pick up a random white Lamborghini in an alley, Problem’s Uber driver played by Slink Johnson jokingly surveys the upscale Valley neighborhood before arriving to pick him up.

“Even the gardener’s got designer fashion on. I’ll rob his ass and be happy,” Johnson says.

Problem enters the luxury sports car and drives to Compton after Johnson drops him off, then drives to met his Valley-based 7-Eleven convenience store owner Renae for a steaming session in a neighborhood alley. But as Ranae suddenly gets sucker-punched out cold by Problem’s other friend Fat Rat, who tells Problem that he threw the blow in accusation of Renae stealing his buds. Snoop then appears as his friend and dealer who calls Fat Rat accuses his buddy of siphoning that same lost weed.

Snoop’s role as a weed plug with a menial line and the scene pales with little purpose, just to give Problem’s frequent music collaborator some shine.

When Problem receives a text from his friend Nick to grab a bottle of Hennessey from a Compton liquor store, the location of where the movie’s opening scene. Problem then rhymes to the J. Dilla-produced instrumental of the Janet Jackson and Q-Tip 1997 collaborative single “Got Til It’s Gone.”

This is my favorite scene/song from “A Compton Story”. What’s yours? #AComptonStory exclusively on @tidal

The song’s title and its memorable Joni Mitchell “Big Yellow Taxi” song hook sample is an allegory of the movie’s theme as Problem parallels his independent rise in the music industry. Problem eulogizes Nipsey Hussle in the track, paralleling his own independent career in the music industry to the late Los Angeles polymath and Problem constantly watching his back for unwarranted drama in Compton. He also explains how the murder of Nipsey Hussle unified the Los Angeles urban community but the envy was overwhelmingly stronger than the love and cost him his life.

As gunshots suddenly blast outside the store as Problem exits, he sprints and scurries from the scene in his car.

“Someone just tried to shoot at me, dog, I swear the God,” Problem said as he frantically called Nick while en route to his house.

Jackie Long at Nick’s house and makes funny one-liners about Problem’s hairline and dome size which saves the scene from another bland filler moment. Nick then texts Problem, apologizing that he sent Jackie instead to stand in his place because he had to run another errand

After driving away from Nick’s place without the goods, RJ Cycler then pulls up in his own car next to Problem at a stop sign. Problem fearfully ponders, “Damn, I can’t go out like this” as if he’ll be shot.

Problem then acts out the lyrics mimicking André 3000’s finals verse from Outkast’s 1996 single “Elevators” while encountering a fan. He assures him that despite having a fancy car and “more money than the average man,” he doesn’t have enough friends to trust.

These two songs performed back-to-back adds to Problem’s cache of homages by covering songs his 90s rap influences such as Master P, DJ Quik throughout his discography.

“DONT BE MAD AT ME” is now available on ALL streaming platforms! Go run it up! #AComptonStory exclusively on @tidal

When Problem pulls up to a gas station to fuel his car, the memorable background music of Friday movie bully Deebo plays as he gets approached by young female fan. As she introduces herself, the goddaughter of Problem’s lover notices the fan and him hug each other. Bae’s goddaughter then texts pictures to his lover of what she misinterprets as him creeping behind her back. Problem’s suspects that there will be trouble at home as a result after ignoring several text messages from Bae during his journey.

But, in Huxtible-Cosby Show fashion, as he returns to his home to plead for Daphne’s understanding, he reveals that the Lamborghini is a gift for her. She immediately forgives him and they hug each other for a happily ever after resolution as “Don’t Be Mad At Me” plays in the background.

The film centers this track, which also serves as a message to his fans and hometown community that he loves. His Machiavellian note to “keep your friends and your crew closer” in the closing song he performs in the closing scene. Aspiring to receive love, trust, redemption and being hometown hero is a tough feat.

It shows that Problem trying to balance each is possible, but there’s always one variable in the equation the makes it harder to solve along the way.