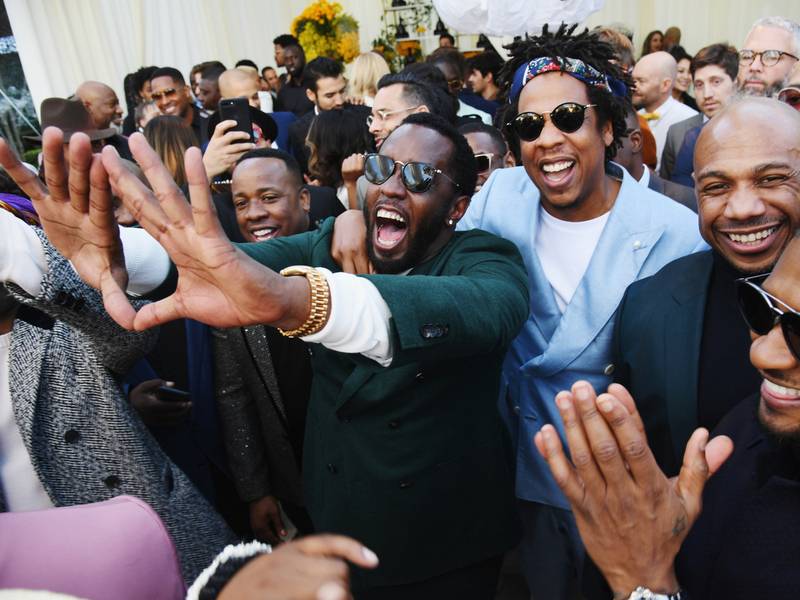 The 62nd Annual Grammy Awards were held in Los Angeles on Sunday night (January 26), celebrating a year of music accomplishments. Every year, the Grammy weekend features a variety of parties with some of the biggest celebrities gathering for the festivities.

HipHopDX has sifted through the glitz and glamour to highlight some of the 2020 Grammy’s hottest parties and events.

The Roc Nation Brunch is arguably the littest event of Grammy weekend outside of the actual show itself. This year’s floral theme didn’t disappoint as the elite of Hip Hop came out in droves to celebrate their year of accomplishments. The upscale formal affair had guests in attendance including Diddy, Meek Mill, DJ Khaled, Kevin Hart, Cardi B, T.I., Dave Chappelle, Megan Thee Stallion, Offset, Quavo, Rihanna and — of course — JAY-Z and Beyoncé.

THE GAME HAS BEEN ELEVATED!! ✊🏿

There was no shortage of D’ussé flowing as guests were greeted by beautiful floral arches, a walkway covered with colorful roses and portraits of past Roc Nation Brunches. This included various pictures of Hov with Diddy, Rihanna and a tribute to Nipsey Hussle and Lauren London with their picture from last year’s brunch.

London proudly attended this year’s brunch with the late rapper’s sister Samantha Smith. The color schemes coincidentally matched the colors the couple wore last year, although it isn’t confirmed whether this was done intentionally. As the conversations were flowing, there was a true essence of Black Excellence in the air that everyone could feel.

Spotify does it big every year for their annual Best New Artist celebration. They rented out a huge lot in West Hollywood, which shined a spotlight on Billie Ellish, Lil Nas X, Lizzo, Black Pumas, Maggie Rogers, Rosalîa, Yola and Tank and The Bagas. Lizzo kicked off the night performing hits like “Good as Hell,” “Truth Hurts” and “Tempo.”

Lizzo impressed the crowd and proved she is here to stay while hitting high notes while singing “Cuz I Love You.” Lil Nas X also killed it with his budding stage presence, taking the stage with Billy Ray Cyrus to perform “Old Town Road,” which won two Grammys. He also previewed his new song “Rodeo” featuring Nas ahead of its debut at the awards show. Guests enjoyed a variety of delicious food stations, a photo booth, and if you were lucky, professional portraits to take home shot by celebrity photographer Dennis Gocer of The Collective You.

Clive Davis’ annual Pre-Grammy gala honored Diddy with the Salute to Industry Icons Award. At the event, Diddy called out the Recording Academy for lack of respect and diversity when it comes to Hip Hop. Nonetheless, he was still celebrating his accomplishment later at a private party at his estate in Bel-Air.

The exclusive party was definitely the second wind to his “Diddy 50” birthday extravaganza that took place in December. Anybody who was somebody was in attendance including The Carters, Ma$e, Lil Kim, Lala Anthony, G-Eazy, Chris Brown, Usher, Jamie Foxx, Naomi Campbell, T.I., Chance The Rapper and DaBaby, among others. Diddy let it be known this was a dance party and told everyone to put down their phones and let loose. The party went well into 6 a.m like only a Diddy party could.

DaBaby let his nearly 10 million Instagram followers know he was throwing an epic day party to celebrate his two Grammy nominations. He rented a huge mansion off Mulholland Drive in Beverly Hills in what he called some “Upper Echelon Shit.” Attendees enjoyed three separate open bars, a multiple leveled party and five-star food with lobster mac and cheese, shrimp and grits and filet mignon with mash potatoes. He pulled up to his party rocking a dapper red suit, dripped in diamonds. Working the room, he took pictures with guests and a few celebrity friends like Megan Thee Stallion, Casanova, Mike WiLL Made-It, NLE Choppa, YK Osiris and YFN Lucci.

Watch the recap below.

Organized and Sponsored by @billiondollarbabyentertainment . Hundreds of important people made time in their schedule to attend. Beyond grateful for the love & support showed last night. Recap by: @reelgoats ?

Meek Mill started off the Grammy festivities with an intimate party and performance to commemorate his nomination for Best Rap Album of the Year for the work he did on Championships. Meek addressed the audience saying, “I’m representing Dream Chasers straight out of Philly. Thanks for having me in the building tonight, it’s Grammy Weekend coming up, fuck it let’s have a good time in L.A. Let’s do it.”

I know the difference from being loved and being used!

He performed hits such as “Dreams and Nightmares,” “All Eyes on You” and “Ima Boss.” In the coming weeks, TIDAL plans to release the exclusive performance on its service, giving subscribers a chance to relive or experience the special event for the first time.