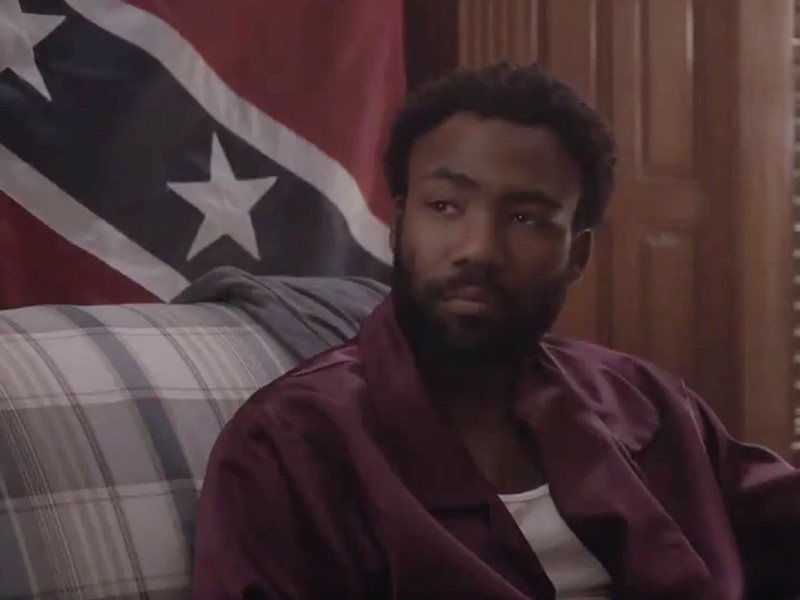 Earn’s look at the end of this almost-final episode of Atlanta: Robbin’ Season depressed the shit out of me. I don’t know if I’m the only one who’s ever felt like I was in a similar situation (or maybe actually been there), but it sucks when you’re the good guy, or at least seem to be and the whole world turns on you at once in ways that aren’t even logical.

Tracy, who you’ll remember from the blindingly spiraling wavy hair, gets to wreak havoc in “North of the Border,” and makes it to the final scene almost completely unaffected. Earn, however, hits what we’ve gotta hope is rock bottom, especially because right now it’s not even clear if he’s homeless or not since Tracy seems to be still occupying his old spot back at the apartment, and he and Van are on the outs. And now that Alfred has decided to fire him, all he has is his pride, and even that, along with his face, gets bruised before this one finishes.

Repost: @muraihiro Tonight’s #AtlantaFX episode is written by @joswank and it’s brought to you by TLC pajamas. 3 more episodes left

One of the things that stood out was both Alfred and Darius trying to hide their snickering at Earn when Tracy pretends to shoot him with the antique gun. That click, and Tracy’s reminder that you can’t even put a bullet in the gun, reassured us that it was unloaded, but something clicked in Earn also. Maybe it was Tracy’s childishness and mocking. Maybe it was looking down the barrel and not seeing the light at the end of the tunnel, so to speak. Whatever it was, his cousin and friend found it funny.

If we’re honest, this kind of shit happens every day. This was Earn as Kendrick Lamar on good kid, m.A.A.d city, if that city were ATL. He’s the well-intentioned loser being dissolved every day by the world around him, and it’s not totally his fault. But it’s also not not his fault, as far as what we on the other side might think about how he got to this point. And with Alfred and Darius’ struggle to keep straight faces while Earn fumes at Tracy from the back of the car, it’s also relevant that when it’s all over, the only possibly detectable emotion from Tracy is that it ain’t his fault either.

We can do anything. Even in silk, son. Tonight at 10pm. #throwback #TLC #pajamajam

And to his credit, he didn’t over-beat Earn’s ass – he just got it over with and done. Sometimes – lots of times, actually – the little guy loses, and keeps losing in quick succession until the little guy figures out how to fight back, or totally gives up. We’ll have to see how Earn takes his L as the season winds down.

Now that’s out of the way, Jesus … that Epsilon Theta Xi frat house scene, with naked pledges doing “The Poole Palace” dance to D4L’s “Laffy Taffy,” while lined up in front of a massive Confederate flag, was wild as all hell. And it was probably 100-percent spot-on, in terms of something that might actually occur here in Georgia or elsewhere in the South. This episode was shot mostly in Statesboro, so the suggestion is that we’re on the campus of Georgia Southern University, where in real life there’s an organization called Theta Xi that has a chapter at Georgia Southern and Georgia Tech, and is said to be the only American fraternity in existence that started during the Civil War. And who knows how much crazy shit is really happening inside those frat houses?

It was interesting that the frat boys hanging out on the porch were kinda cool. They knew who Paper Boi was, they were fans of Southern Hip Hop, had weed to share (also, Alfred’s weed habit seems pretty serious, right?), and were willing to give the guys a tour of the house’s “gun room,” which of course they shouldn’t have but of course they did.

However you feel about them putting Paper Boi on the same level as Post Malone (Alfred certainly wasn’t impressed), or being into Snap music, is your business. But there’s definitely truth in some of the silliest representations of rap being some of the most popular, and most likely to cross over. On one side, it’s not really a compliment to put Paper Boi in the same box as rappers who were probably inspirations for Little Brother’s The Minstrel Show album. But it’s also not really an insult, and at least it opened up conversation and allowed Alfred to get his much-needed THC fix.

Hip Hop continues to bridge gaps between young black and white men who have completely different sets of views and beliefs, but contrary to perception a lot of us actually do get along across the South. The pledgemaster’s assertion that Pimp C was “one of the last true prophets” is something I swear I’ve heard black dudes say, and it sounds just as crazy regardless of melanin.

Then there was Violet, the crazy Instagram fan smitten with Paper Boi but who somehow had footprints on the ceiling. And there’s no good answer for how or why that would be there, but it was a sign that she was very much not right in the head, aside from the rolled eyes her roommate Honey kept giving her when they arrived to spend the night. We all know that girl, who had a dream that could be interpreted as her vision of basically getting pregnant by Paper Boi and then killing him, so we knew she would trip out at some point. But when she poured the drink on Alfred – who even Earn noticed seemed to be at ease with the regular girls at the pajama party – it was uncomfortable to see how unfazed Tracy was as he mushed her down the stairs, looking away as if it didn’t matter where she’d land.

u can do it put yo back in2it #AtlantaFX pic.twitter.com/tCzDlIfC57

Luckily it was safely into Earn’s arms — another example of Earn’s good nature and ability to save the day. But of course she slapped Earn, because he’s a punching bag, regardless of what he does right or what anyone else does wrong. And of course Tracy’s blindsiding of the guys who confront them outside wasn’t necessary, since Earn was actually calming things down, but hey, nobody expects Tracy to be anything but Tracy.

So Earn may be the one fired, and Alfred may decide to use Clark County’s management team, but he’s still tagging along, possibly because there’s nowhere else to go. This episode ultimately has the feeling of that moody song just after the middle of a classic rap album’s tracklisting, between No. 8 and 11. This is usually when the artist gets into her or his deepest feelings, and things are at their lowest, and nobody’s happy. On Puff Daddy’s No Way Out, it was “Pain.” On The Blueprint, it was “Heart of the City.” For Run The Jewels 3, it was “2100.” There’s not a lot of resolution to be had just yet; you just have to sit there until things come around. Sometimes everybody has to hit the ground. The question is, are you so deflated from hitting the ground (and Earn did hit that asphalt pretty hard) that you can’t bounce back?

We as the audience know Earn deserves better, but he also made the bed he’s sleeping in. What happens next will be extremely important for the season, and not just because we’ve only got two episodes left. Maybe that fade Tracy handed him so easily was necessary, and maybe he knows it. But in order to come back from where he is right now, he’s gotta be clear about where he is, and where he goes from here. And that may not seem easy to do with a closed eye, especially when you’re riding with “friends” and family who don’t really feel bad for you, but at least you’re going somewhere, and anywhere’s better than where Earn was at the end of “North of the Border.”