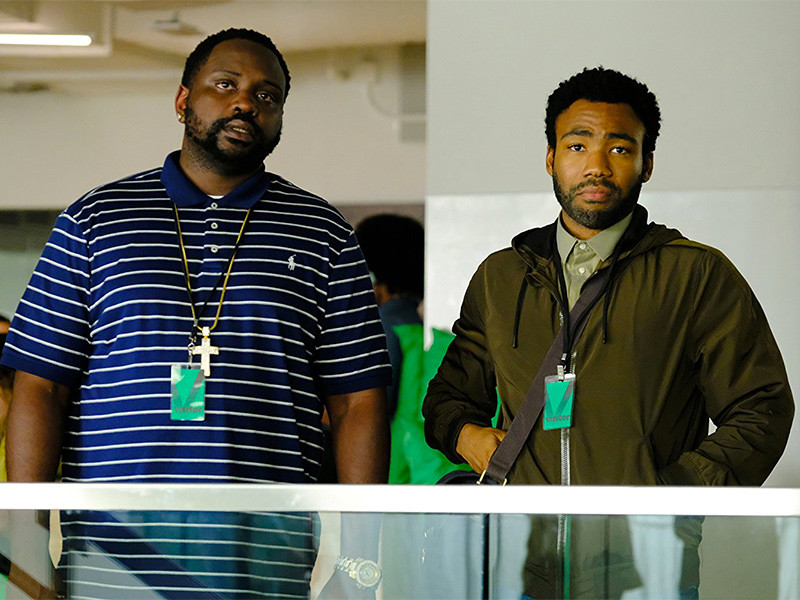 If last week’s “Alligator Man” episode proved that Atlanta’s first season was no fluke, and that the comedy series is to be taken seriously as good TV, last night’s “Sportin’ Waves” showed where the show’s loyalties lie.

Although there was plenty to enjoy in the second episode of this second season of Atlanta, the end of “Sportin’ Waves,” where we finally see the result of Tracy’s du-rag diligence, stood out as Robbin’ Season’s funniest moment so far. Maybe because I have a cousin in the military who’s just as charismatic as the shoe-stealing, gift-card-rigging hustler (who actually took his interview seriously, all things considered), and who regularly posts Instagram updates of his wave progress.

It’s almost unbelievable that waves haven’t been spoofed to such perfection before now. I certainly wore a wave cap for years, and can remember the joy of achieving that perfectly crisp spiral. Nothing as brilliantly overdone as Tracy’s result, but ridiculous nonetheless. I’m neither ashamed nor proud, and I’m by no means above buying a new du-rag tomorrow on the way to work. It was another example of Atlanta being a truly FUBU show that shares secrets we don’t mind laughing at, and offered another reason to believe this show will last as long as the cast, writers and FX want to make it.

Baking underneath the surface of “Sportin’ Waves” were several cultural cues that were specifically meant to address the white elephant in the room: appropriation. Cleverly, this episode addressed it from several interesting perspectives.

When the episode begins, and Alfred’s plug decides to steal his re-up money instead of selling him his normal packs of weed and ecstasy, we get the first taste of “What’s mine is mine, and what’s yours is mine too.” The difference is that it’s black-on-black, and we get a sense of sadness from both victim and villain. Alfred seemed to genuinely appreciate his connect’s co-sign of his music, even as he’s getting robbed. And his supplier’s need to apologize profusely for ripping him off showed that he probably meant every word, and was intent on eventually making up for his transgression.

the plug a complete trash human being. manners on point tho ??‍♂️

It was a reminder that Robbin’ Season is sometimes to be taken literally, especially after we began the season with a fast food robbery a week ago. Makes you wonder if we should expect the jux in every episode.

Next, we see it in Alfred and Earn’s visit to the Fresh offices, where there’s all sorts of culture-vulture-ism at play – enough to make Alfred walk out of the Fresh office, rather than perform his hit song to a small crowd of its employees, including this guy:

And did you catch that moment when the entire staff was staring at Earn as he looked the other direction, then simultaneously played it off when he glanced back their way? There are several ways to interpret it, but the cultish observance of him said a lot about Corporate America’s zoo-like treatment of black talent and tastemakers. It was perfectly, intentionally creepy, and yet familiar to anybody that’s ever felt out of place.

There’s also the conference room scene, where some nameless rapper is going through the motions of performing what looks like a trap song to a room full of emotionless observers. The background vignette brings to mind Bobby Schmurda dancing on a table for L.A. Reid and a room full of label folks before signing to Epic Records. But where’s he now?

The acoustic rap cover was another genius screenshot of real life captured and reproduced through Atlanta’s style of comedy. I don’t know if I could measure the grin across my face when Alfred played the video of his tryout-plug’s girlfriend singing and strumming his song, but I’m glad some of my friends of non-color couldn’t see it spreading.

But again, with all the laughs (and there were lots – I cracked up at Alfred staring at the lizard, and Tracy’s walkout and lookback flatlined me), the ending left a buffet of food for thought.

Why did the hiring manager deny Tracy the job? He’d shown up on time and well-dressed for the interview, and he’d presented himself with confidence, just as Earn had suggested in the shoe store. But did any of that shit matter beyond the upfront fact that Tracy, a black guy, thought he had a chance to be hired by a white corporate type who probably didn’t know he was good at stealing shoes but instinctively knew bringing him in might cause problems? And dude seemed to regret offending Tracy after telling him there was no job, so was he really racist? Or, was Tracy’s preoccupation with the appearance of his hair a warning sign to the hiring manager – a hint of Tracy’s perhaps misguided ambition/thirst to be accepted in a place where he just wasn’t a proper “fit” for the office culture? Shit, would you hire Tracy?

Either way, two episodes in, Atlanta continues to stay down with its base and capture unexpected truths (and next week’s strip club episode promises to be another classic).

And while “Sportin’ Waves” may not have had the depth of Katt Williams’ performance, its slick nods to everyday situations and ability to turn constant insecurity into high comedy made this episode an improvement over the already stellar premiere. And I have a feeling that others will say the same, because even when the show momentarily focuses on greasier characters, it always finds a way to humanize them and make us laugh. Simply put, it gets in our heads, and it’s nowhere near done making waves.