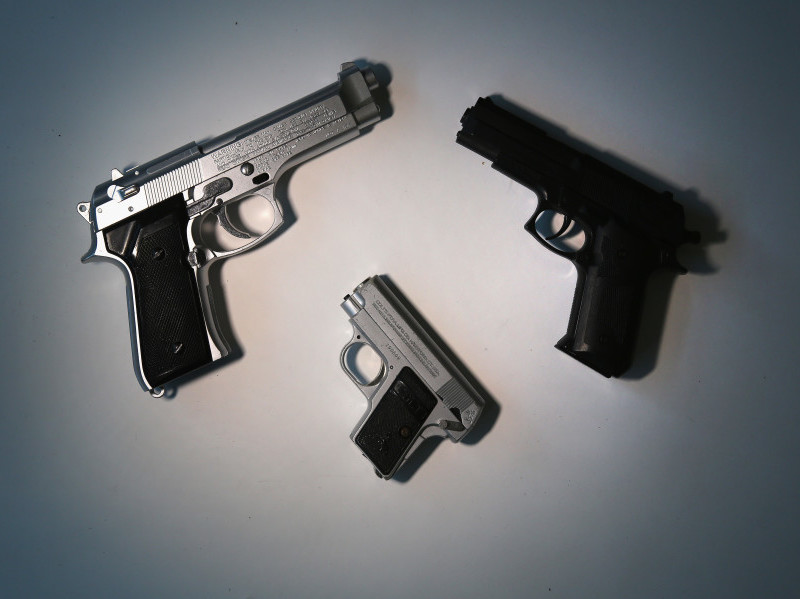 Doh! 11 Rappers Who Were Busted With Guns At Airports

When Juelz Santana was caught by TSA with a gun in his luggage at Newark Liberty International Airport and subsequently charged by police earlier this month, he placed himself among the cadre of rappers who unsuccessfully navigated airports with more straps than necessary to carry their luggage.

Here is a list of 11 rappers who have been booked by cops at airports after they were caught “overpacking” for their travel arrangements.

Late Gang Starr lyricist Guru was one of rap’s most storied jazz torchbearers. But he occasionally rapped with hardcore lyrics about how “tons of guns” spread rampant violence in his Brooklyn neighborhood. In February 1996, a remnant of his art matched his life as Guru entered LaGuardia Airport in Queens, New York, to Los Angeles, and was found with a .380 caliber pistol in his carry-on bag. He was arrested thereafter and pleaded guilty to avoid prison with a reduced sentence of three years probation.

Guru detailed his frustration about the incident on “JFK To LAX” from the group’s 1998 album Moment of Truth (which turns 20-years-old this year).

The No Limit Records founder and rapper/entrepreneur maintained his Second Amendment right to carry a licensed gun in his name when he was arrested at Newark Liberty International Airport in 2003. But what’s really jarring is the fact that he had sharp, illegal Teflon-coated bullets called “cop killers” to prove he was definitely ‘bout that life.

The Colonel advoided jail time in the incident, however.

For over 25 years, Uncle Snoop has whimsically mused in his array of hit songs about staying on deck with guns. On October 26, 2006 at Bob Hope Airport in Burbank, California, revisited his Long Beach O.G. roots. As police handed Snoop a citation for a loaded zone violation at the airport, they searched his car and found a gun and (surprise!) weed, and apprehended him with gun and marijuana possession charges.

A year later, he accepted a probation deal that granted him some fresh air courtesy of community service.

When Atlanta’s Yung Joc was at the height of his fame in 2006, the former Bad Boy Records artist released the Billboard 100 chart-topping single “It’s Goin Down.” The song’s lyrics invited anyone to meet him anywhere because it’s “guaranteed” to do as the title suggests— for better or for worse. On December 23, 2007, one year after Joc released the southern “snap” movement staple, Cleveland police obliged to check him upon the latter at Cleveland Hopkins International Airport.

He was caught with a semi-automatic handgun and ammunition in his carry-on bag and eventually charged with carrying a concealed weapon.

In the late summer 2001, Petey Pablo put it on for his home state of North Carolina when he released the memorable Timbaland-produced track “Raise Up.” The timing of the “Raise Up (All Cities Remix)” was effective to rally the grieving American population following the 9/11 attacks one month later. With its reworked chorus chanting “U.S.A.!” and shoutout to several major U.S. cities, radio stations nationwide played the single to symbolize patriotism, which made Pablo one of rap’s most popular stars of that year. But nine years later, on September 11, 2010, the muscle-bound rapper was arrested as he attempted to bring a stolen 9mm Smith & Wesson gun onto a plane at Raleigh-Durham International Airport.

Besides the consequential four-year prison sentence that Pablo was handed to him because of his felony record, this case has too much irony by the numbers.

Atlanta Hartsfield-Jackson Airport is a common ground for several of these southern rappers looking to fly the friendly skies with firearms. On August 22, 2011, another ATL rapper Memphitz somehow tried to get through this airport with a .40 caliber Desert Eagle gun. It was discovered by the TSA as his carry-on bag went through the X-ray checkpoint, and he was later arrested by police. The kicker is that Memphitz was only charged with a misdemeanor for carrying a concealed weapon that can split a human body in half with one shot.

On February 15, 2012 at Atlanta Hartsfield-Jackson International Airport, Travis Porter member Strap claimed to authorities that he forgot about a 9mm gun in his backpack and that it was an “Honest-to-God mistake” when they found it on him. It’s difficult enough to look past the fact that this rapper’s name is Strap. Also, let’s give him the benefit of the doubt that the Travis Porter member didn’t initially tell police this stage name when they caught him with the gun.

Almost 30 years ago, Oakland legend Too $hort declared his omnipresence in rap with his 1990 album Short Dog Is In The House. But at Bob Hope Airport in Burbank, California on Oct 2, 2014, Shorty The Pimp was lucky to avoid a stint in the “big house” after he was arrested after a TSA employee found a loaded handgun in the rapper’s carry-on bag. During the incident, he ran away from the premises to get his lawyer before he was detained by the police for carrying a loaded gun in a public place.

This Atlanta rapper likes to rap about guns, so it’s not a shock if Waka ever gets arrested for possessing one. Just eight days after Too $hort’s arrest, on October 10, 2014, Waka Flocka Flame was arrested by police at Atlanta Hartsfield-Jackson International Airport after he attempted to bring a loaded gun in his carry-on bag. He was eventually found not guilty on all charges.

The Boston-bred Benzino made a name as a member of rap group Made Men, former co-owner of The Source magazine during its 1990s heyday (which sparked a short-lived beef with Eminem during the early 2000s). And, of course, his stint on VH1’s Love and Hip Hop: Atlanta showed him teaching valuable lessons to rappers from his cautionary tales of failure. The most recent tale came on January 28, 2015 when he tried to fly to Los Angeles from (once, again!) Atlanta Hartsfield-Jackson Airport. Benzino put his carry-on bag on the conveyor belt, which had a 9mm with seven round of bullets inside of the gun.

One of the airport’s TSA employees found it, and arrested Benzino, and was then charged with possession of a loaded handgun.