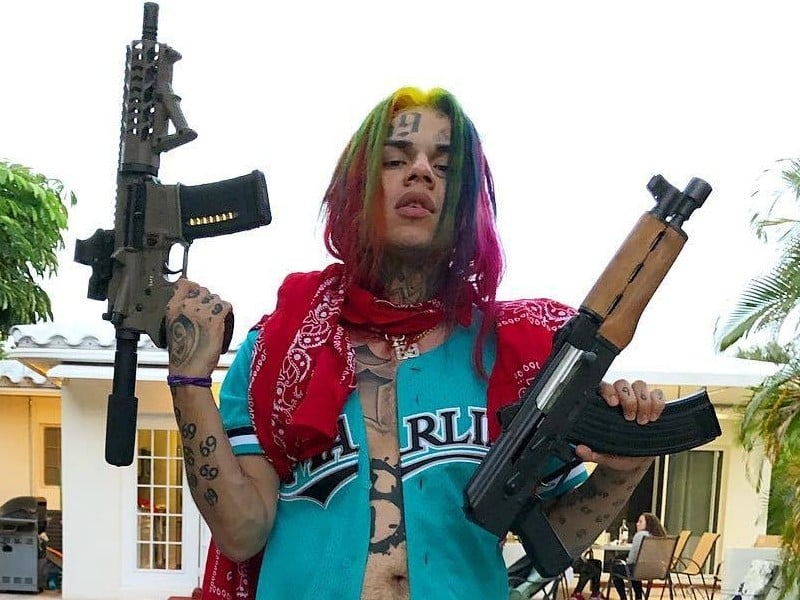 The face of New York and they dont like it…. if you wanna change that make ya music sales & beat me on the charts. As For now shuttup and just watch me.

Never one to shy away from bold comments, Tekashi 6ix9ine went on Instagram to call himself the “King of New York.” He claims if he wasn’t the king, somebody would have “stopped” him by now.

I wake up in Vilnius, Lithuania today & the 1st thing I see is this picture. I was just a little boy from the projects…. never thought in a million years, anything I would ever do in life would touch anyone in my own city let alone across the globe. I’ve always said that I share fans with no other artist in the world & this is a reminder of how true that is. Over the years I’ve seen so many tattoos with my face, logo or lyrics & every time I see a new one I feel like I did when I saw the 1st…. surprised, so appreciative & honored to have touched people on that large of a scale….. My fans are THE GAME fans & I’ve always dedicated my music & my life to them & my children. I am where I am in life because of a decision made by each of you individually to support me year after year & for that support I will give you the same love & loyalty for as long as I breathe. I am forever grateful & indebted to you all…… Thank You, sincerely Hurricane Game #45

The Game has amassed a strong fan base over a career that’s last well over a decade. In a touching post to Instagram, the West Coast MC shared a picture of a fan with a tattoo dedicated to him along with a message to all his supporters.

WISH??‍♂️I’m worth 7M now ???? gods great please wish for what ever you want just always make sure u meet god half way with that hard work ??? ALBUM MODE. 1400/800 forever fuck these unicorn lookin mfs oh and P.S bought my mom a crib as well 300k not to mention that’s before I said new chain alert ?? eternally Thankful ❤️came a long way from canton….

Trippie Redd posted a clip featuring himself swinging from a chandelier and his track “Make A Wish” playing in the background. His caption praises God and includes a line that many think is aimed at Tekashi 6ix9ine — “fuck these unicorn looking mfs,” he wrote.

Lil Wayne and Juelz Santana fans have been waiting years for the two to release a collaborative album. The long-rumored I Can’t Feel My Face project was reportedly scrapped and turned into 2010’s I Am Not A Human Being, but this week, Weezy posted a photo with Santana featuring a caption that implies the LP may finally be on the way.

After Diddy posted a video expressing his distaste for modern rap, Funkmaster Flex reposted the video and took it up a notch by calling out specific artists. The DJ encouraged his followers to call out rappers they think are wack and responded to his own post by tagging Nicki Manaj, G-Eazy and Lil Pump.

Don’t Write A Nigga If You Aint Sending Pics

Kodak Black is behind bars for charges of grand theft of a firearm, drug possession, child neglect and more. Since he’s locked up, his team posted an image to Instagram with an address where fans can send him mail … with one stipulation.

New father Travis Scott shared a picture of his daughter, Stormi Webster. “Our little rager,” he wrote in the caption.

Azealia Banks Claims She’ll Drop The Album Of The Year

You lot love to inquire/make jokes about my mental state but there is a richness and heightened state of being that comes along with being a bit loosely assembled. Endless, Boundless , Creativity.

Azealia Banks, typically in the headlines for her incendiary comments, posted a long message to Instagram that touches on her talent and mental health. In the post, she asserts she will have the album of the year in all genres.