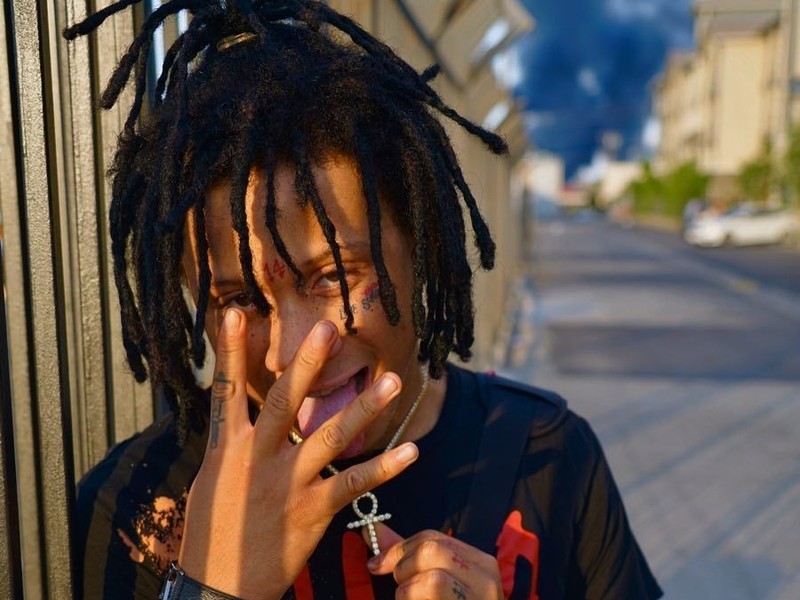 Trippie Redd is one of the latest genre-bending artists to emerge in Hip Hop. His blend of rap, rock, pop and R&B has made it difficult for the confident 18-year-old musician to put a label on what he does.

With his “Love Scars” music video surpassing 11 million views on YouTube, Redd has some wondering what his next move will be. On Wednesday (October 3), his diehard fans packed The Roxy in West Hollywood, California for a night to remember.

Hosted by Spotify, the show was a celebration for Redd’s upcoming mixtape, A Love Letter To You 2. In his 420-friendly room backstage, HipHopDX caught up with Redd to learn more about the buzzing artist.

HipHopDX: Who is Trippie Redd?

DX: Where did you come from? Seems like you popped up out of nowhere.

Redd: Uh, Saturn. Psych! I’m from Canton, Ohio. Don’t nobody really make it from there. That ain’t nowhere nobody even know. Unless you into football … Hall of Fame city.

DX: You mention how hard it was being from your hometown. How involved were you on the streets?

Redd: I mean, Canton is the second most dangerous small city in America. I went back and forth from like Canton to Madison. It’s two different parts. Two different places and shit, but I was mostly on Canton. My cousins lived on 14th Street. And I lived with them. So, I’m from 14th Street.

DX: Marilyn Manson is actually from Canton. Is he an idol of yours?

Redd: He’s not an idol, but he’s one of my favorite artists — in a way. He is actually where I’m from.

DX: You’re actually singing on “Rack City.” Where’d you learn you could hit those high notes?

DX: You going to work with Drake soon?

DX: Do you want to work with Drake soon?

Redd: We know each other [laughs]. He got my number.

DX: Speaking of, how about that Lil Wayne cosign? How’d that happen?

Redd: Yeah, it comes out Friday. It’s lit. It’s like A Love Letter To You 1. But like, super juiced up. Like, I improved on everything. Everything’s much better.

DX: What do you want fans to get out of it?

Redd: I just want them to be familiar with my voice. All these tapes dropping is just getting the industry, all the people, just to know who I am and hear my voice.

DX: Your music is a mixture of rap, rock, pop … what genres are left?

Redd: It’s mostly alternative rock, R&B, Hip Hop, all types of shit just put together. I really just like … It’s my own subgenre. You can’t really put a name to it. I’m just versatile. I do everything.

DX: What do you think of some of his tactics?

Redd: [Laughs hysterically] I mean, all I wanna to say is, bro loves to listen to “Catch Me Outside” in the car [laughs]. Yeah, that nigga. What’s that? “Hi bitch. Bye bitch. Left wrist. Right wrist.”

#TrippieRedd speaks on his friendship with #XXXTentacion ? Head to HipHopDX.com for the full interview! @trippieredd

DX: What do you think about her [Danielle Bregoli] getting a record deal?

Redd: Who, Danielle? That’s fire. I support that. That’s the homie.

DX: What would you be doing if you weren’t rapping?

Redd: I wouldn’t exist [laughs]. All I ever wanted to do was music. There was nothing else I was about to do.

DX: Who’s your dream collab? Who do you want to work with?

Redd: I’m already done worked with my idol. That’s the only one I wanted to work with: Wayne. I mean, I’m working with everybody that I idolize, so it’s like, I can’t answer your question.

DX: When can we expect that record?