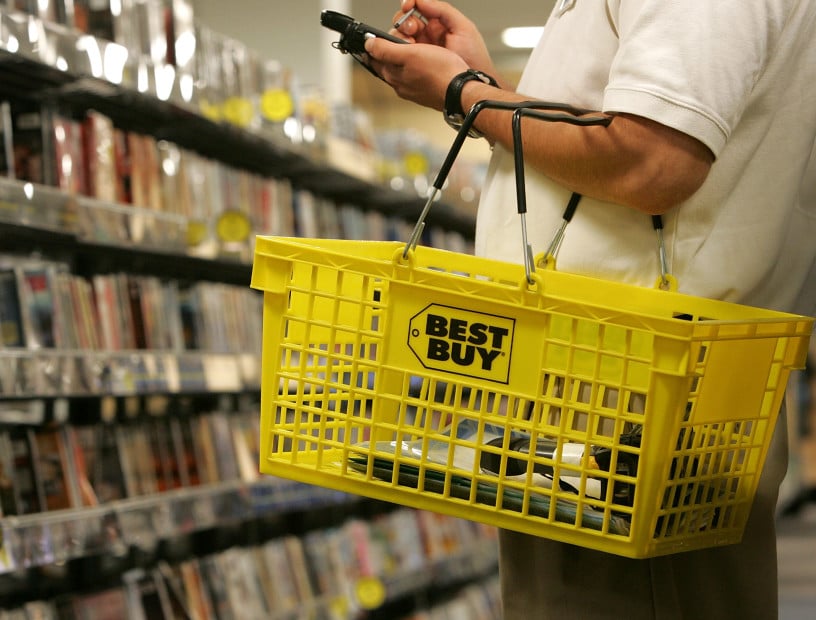 The Better Buy: It’s Time To Let CDs Die In Favor Of Streaming

Billboard recently discovered Best Buy plans to wipe all the CDs off their shelves starting July 1.

Yep, it’s officially the end of an era.

Nostalgia aside, it’s a move that should have been made a long time ago. Compact discs are more expensive than a streaming service, less coveted than records, and are increasingly irrelevant as new laptops and cars come without disc slots.

Vinyl and cassette are also a thing, you know…

To all you old heads and not-so-old-heads who are collectively losing your shit over the pallbearing of your beloved medium, I get it. I was once a staunch defender and obsessive collector of CDs. It was to the point, once, that I was away from home and had heard about a tornado warning for my town.

One of my first thoughts? “I’m worried about my CDs.”

They were so much fun. The liner notes, complete with shoutouts and thank yous and tidbits about the album’s creation, were almost as enjoyable as the music itself. There were the photo shoots, which featured black-and-whites of rappers hanging out with kids from their ‘hood, surrounded by gorgeous models, or shamelessly promoting their clothing lines (looking at you, Shawn Carter). And there was simply the fact that you could amass more CDs on your shelf than the number of shoes in Kanye’s closet, and sometimes just marvel at the abundance of excellence that sat just to the left of your underwear drawer.

You do realize that CD players are computers, right?

And yet, that time has long passed. Consequence of Sound reported that the number of CDs sold in the United States dropped from 800 million in 2001 to 89 million in 2017. That’s nearly a 90 percent decline in overall sales, which means that the masses no longer care to clutter their homes with polycarbonate plastic. During a recent Footaction event that showcased the talents of iconic Hip Hop photographer Jonathan Mannion, HipHopDX Editor-In-Chief Trent Clark told me that Mannion said the decline of physical music copies hasn’t changed his vision on how he shoots cover art. If anything, he says it’s impacted it.

amazon exists.
and when has a T-shirt come with an album? pic.twitter.com/NEyIEidLxZ

Accepting the end of CDs isn’t about conforming for the sake of conforming, though. It’s frustrating that Tidal and Apple Music, for example, are in a war that keeps certain albums off either streaming service. However, for $9.99 per month plus tax, either of those services, as well as Google Play or Spotify, offer multiple lifetimes’ worth of music compared to a 15-track CD. Even if one were to subscribe to both Tidal and Apple Music, that’s still just an Andrew Jackson per month as opposed to buying three or four CDs for an average of $60 and change.

Embed from Getty Images
Signed CDs are cool and all but current fans have shown they much rather take a flick for Instagram or Snapchat with their favorite artists. Look at the numbers.

I know, I know, you’ve probably got memories of popping in Speakerboxxx/The Love Below and dancing around to “Hey Ya!” during a middle school sleepover. Or you and your boys fondly recall wearing out the skeleton-covered E. 1999 Eternal while driving and toking. There’s the physical component, you say. So often I hear, “I like to be able to hold it in my hand.” And you know what? I get that. Completely. But if that’s the case, records are a much better option. Sure, they can be more expensive, but if you’re that much of an avid collector that you’re willing to shell out the aforementioned $60 per month over $10 or $20 for a streaming service, the difference shouldn’t be that big of a deal. Record players and records offer a unique sound and are a conversation piece when entertaining houseguests. Unlike your CD, which skips every three tracks and is blaring from a boombox that looks like it was jacked from the set of Brown Sugar.

Still not convinced? Let’s talk accessibility. I’m writing this from a Chromebook which has no CD drive. I listen to music on Tidal or YouTube and watch movies on Netflix or Amazon. What good is waiting out for the physical copy of DAMN. or In Celebration of Us if you can’t even play it in your car?

Put your cents where it makes sense, with either streaming services, records or both. Then, Frisbee-toss your compact discs into the trash.

If you still hold dear to the physical format, become part of the trend that saw vinyl LPs account for 8.5 percent of all album sales last year – a 6.5-percent jump from 2016.