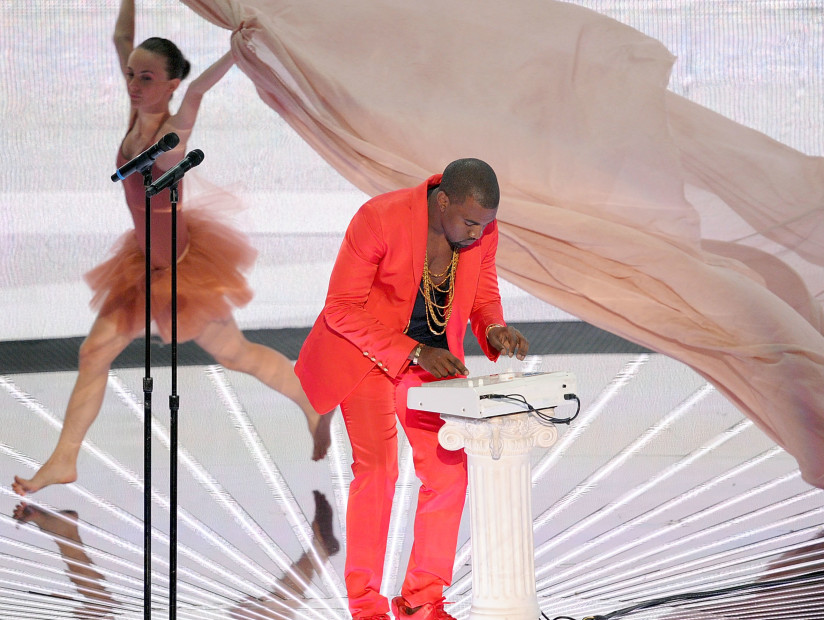 Those were the words from Kanye West himself referencing HipHopDX’s original review of My Beautiful Dark Twisted Fantasy. A project that is widely considered his magnum opus and one that returned a positive public perception back on the gleam of Yeezy’s dome.

Revisionist history is a mofo and if you were to compare the number of people who praise the Auto-Tuned buffet of 808s & Heartbreak in 2017 to the ones who did in 2008, you’d think you were conversing with clones.

Kanye’s pause on rapping immediately sprung campaigns to bring back “the Old Kanye” just a year removed from his 2007 smash, Graduation. Couple that with his Taylor Swift mic-snatching fiasco at the 2009 MTV Video Music Awards, and he had every right to market the title of Public Enemy #1.

But after weeks of holing up in Honolulu, Hawaii (you owe it to yourself to read/revisit Complex’s in-depth coverage of the making of the album), Kanye (& Co. because yo, there is shit-ton of contributing musicians), emerged with something like a masterpiece. As in, say, a pair of masterpieces — one a classically vibrant production bed and the other, a scatterbrained lyrical awakening.

To celebrate the unceremonious but still noteworthy seventh anniversary of the project, we decided to handpick the seven best tracks.

From the very first piano chord, listeners knew they were in for something special. “Dark Fantasy” overcomes Nicki Minaj’s atrocious Cookie-Monster-meets-Queen Elizabeth-accented intro to set the tone for rollicking excess. Anyone who was worried about getting another Auto-Tune album could breathe easy at the sound of steel-toed drums and hand claps. Kanye didn’t do much more than talk shit, but quips like “So much head I woke up in Sleepy Hollow,” “Too many Urkels on your team, that’s why your wins low (Winslow)” and “You ain’t got no Yeezy in your Serato???” was a delicious appetizer for what was to come.

We couldn’t get much higher.

Kanye reloaded from the glorious sounds of “Jesus Walks” and “Touch the Sky” to bring forth “POWER,” perfectly placed as MBDTF’s third (and most thunderous) track. The artwork for its leading single showed Kanye with a sword to his head. It’s pure stadium rock with Yeezy’s hubris questioning if he would be the most powerful leaving fame and wealth behind for a greater cause and falling on his sword in the end.

With its chorus inspired by the memorable hospital scene in Spike Lee’s Malcolm X, Kanye’s ambition was realized in this five-minute opus and evokes a self-predicted seven-year run from underdog to superman. He claimed to be the “abomination of Obama’s nation” and packed a towering handclap-and-choir harmony that echoed an ancient chariot race.

Within the first eight bars, Kanye wasted no time reveling about his king status despite being mentally disturbed by his own genius, sampling the eponymous line from King Crimson’s prog-rock epic, “21st Century Schizoid Man.” Another prime example that making masterpieces is a gift and a curse.

Since early in his career, Kanye had a deep fixation with Michael Jackson and Prince, wanting to become a deity who transcended music and whose feet never touched the floor. In the original version of this song’s video and the opening lyrics (“Something’s wrong, I hold my head/ MJ gone, our nigga dead!”), there was a marching band’s sweeping brass melody and a giant white face of Michael Jackson being pulled along on wheels like a Trojan Horse.

“All Of The Lights” was Kanye admitting his inner desires, anger, and the consequences for his past mistakes along the way to grabbing the torch that MJ left at his deathbed in 2009.

The yin and yang between dark and light for Kanye’s charted path to success was a metaphoric idea that we began to see on his Glow In The Dark Tour in 2008. Echoing his most celestial track on The College Dropout, his spaceship imagery for his stage show was the perfect backdrop to perform “Flashing Lights” from Graduation. That song’s premise was his discovery of becoming luminescent at the Sunset Strip clubs, whereas “All Of The Lights” on MBDTF was his motivational call to shine brighter in the blackened universe.

A year after he and his TIDAL teammate Rihanna ran the town with JAY-Z a year prior to MBDTF’s release, Kanye channeled that song’s energy and picked up his G.O.O.D. Music protégé Kid Cudi along for the ride to the cosmos. (Buried in the instrumentation were vocal contributions from John Legend, The-Dream, Elly Jackson, Alicia Keys, Fergie, Elton John and Drake — a superfluous maestro call for an equally grandiose album.)

Many high-profile collaborations come across as too forced to make sense. “Monster” was a concept record that relived the theatrics of Thriller. Kanye, along with co-producers Mike Dean and Plain Pat, made a jungle-rumbling bass drum beat with subtle keyboards and 808 thumps to evoke the emotions of wild prey being unable to escape its predators.

This collaboration was a Venn diagram for each player involved with JAY-Z appropriately asking during his verse “what do these things have in common?” Being the most flamboyant, uncompromising asshole (Kanye: “My presence is a present, kiss my ass) to fans and detractors alike forced the hand as they pined for peace (JAY-Z: “Everyone wants to know what my Achilles’ heel is/ Love!!!/ I don’t get enough of it/ All I get is these vampires and bloodsuckers/ All I see is these niggas I made millionaires, milling about spilling their feeling in the air”).

But it was a then-unproven Nicki Minaj whose electrifying performance and Terminator 2 T-1000 vocal chameleon-style metamorphoses echoed Slick Rick’s humor, Lil Kim’s elitism, and M.I.A.’s worldly adaptations for Hip Hop music. In the dogfight to the finish, Nicki’s hunger to keep her verse and beat the males at their own game made her a bona fide superstar for years to come.

Rick Ross was on the track too. But he had a better performance later on.

Given his bodacious nature over the years, Kanye was able to garner just as much as attention from his public relationships as his music itself. At the top of the decade, not much notice was given to a bald-headed, thim slick, honey-skinned model in a 2008 Ludacris video but once Kanye got his aspiring fashionista hands on her, Amber Rose: Lust Trap was introduced to the world. Contrarily, his wife Kim Kardashian’s list of previous suitors reads like a top-tier portion of an NBA All-Star Weekend VIP club list and yet, his proclamation of his love for her resulted in a boost to her already solidified American idol status.

All that swooning was perfectly encapsulated in the flowering orchestration of “Devil in a New Dress.” The record was also the pulpit to which lusters weren’t judged but rather rewarded for their impulsive actions.

“May the Lord forgive us/ May the gods be with us/ In that magic hour/ I seen good Christians/ Make rash decisions, oh she do it…” Kanye croons on a five-minute track that packs in not one but two apexes. Following Ye’s frolicking joys of hedonism, the instrumental breakdown (accented by Smokey Robinson’s “Will You Love Me Tomorrow” acidic guitar riffs and wafting basslines) gives way to a majestic Ricky Rozay verse, which paints the unnamed object of affection down to the smallest detail.

Rarely have a few notes belied so much emotion. The high-frequency keys that open “Runaway” ran red with all of Kanye’s bloody self-disgust from the few years preceding My Beautiful Dark Twisted Fantasy — his breakup with his college girlfriend and VMAs stage-crashing most certainly among them. Yeezy has long been known as a jerk, and sometimes unapologetically played into the role. Here, he is equal parts self-pitying and self-loathing, toasting to douchebaggery before imploring his baby to “run away fast as you can.”

The Pusha T factor adds bite to a song that otherwise, with its elongated warbling, could have sounded too much like another 808s & Heartbreak joint (no disrespect to that album, but that clearly isn’t the feel Ye went for here). The story goes that Mr. West forced Pusha to rewrite his verse over and over until it reached Kanye’s standard for dickheadedness. West’s persistence paid off, as King Push’s snarling flow and wordplay like “Ichabod Crane with that muthafuckin’ top off” set the stage for his impressive G.O.O.D. Music run.

For those nine minutes, though, “Runaway” loomed larger than one great MC, or even two. It was melancholy, foreboding, and resigned to a life of self-imposed misery. Truly a toast for every scumbag out there.

It’s not hard to imagine “Blame Game” being drawn verbatim from Kanye’s relationship with Amber Rose. The track is dripping with hurt, from its wistful piano keys and desolate strings to the searing pain in Ye’s voice as he rhymes. In another rapper’s hands, this cut could have jumped off the deep end into a pool of melodrama, but Kanye’s raw, uncomfortable honesty saves the day.

Relatable couplets like “Fuck arguing and harvesting the feelings yo, I’d rather be my fucking self/ Till about 2 a.m. and I call back, and I hang up and start to blame myself” are why Kanye’s music has endured and will continue to play on. John Legend matches Yeezy’s intensity with an appropriately strained hook, but Chris Rock’s (albeit hilarious) coda is mismatched with the harrowing music that preceded it.

No matter, by the end of “Blame Game,” there was no doubt that Kanye West may have been a douchebag, but he was at least a self-aware one.

You gotta love it that somebody still speaks from his soul.